Silence and prayer,
time and eternity, before
a little-known icon 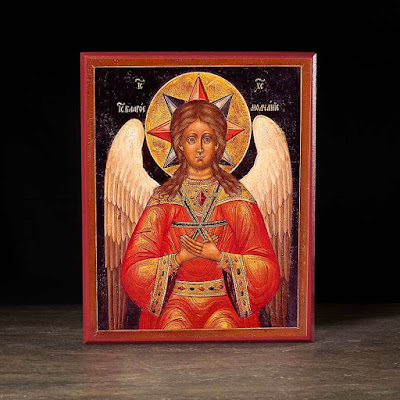 Monday [15 October 2018] was a demanding day’s work, with a two-part programme for priests and readers in the diocese on preparing and resourcing Remembrance Day [11 November 2018].

I spent much of this morning and afternoon preparing liturgical and preaching resources for Sunday week, the Fifth Sunday before Advent, which may also be observed as the Feast of Saint Simon and Saint Jude, and as Bible Sunday.

The lectionary readings for the Fifth Sunday before Advent offer an interesting contrast between silence and listening to God.

In his sufferings, Job has been silenced before God, and now realises his need to listen to God (see Job 42: 1-6, 10-17). The Psalmist wishes to praise God all the time so that ‘his praise shall ever be in my mouth’ (Psalm 34: 1). The response provided for this Psalm is: ‘I sought the Lord, and he answered me, and delivered me out of my terror’ (Psalm 34: 4).

In the Gospel reading (Mark 10: 46-52), when Bartimaeus the blind beggar realises he is in the presence of Christ outside the gates of Jericho, ‘many sternly ordered him to be quiet, but he cried out even more loudly’ (verse 48).

There are moments to cry out loudly in the presence of God, and there are moments when silence is so appropriate. But there are times too when the seeming silence of God is more difficult to understand and to wrestle with than our own silence, as Job realised in the earlier readings from the Book of Job over recent weeks.

So, in my prayers and silent reflections today, my thoughts turned to the icon of Christ the Blessed Silence, an icon found in some traditions in the Greek and Russian Orthodox Churches, but that is not so well known outside Orthodoxy. 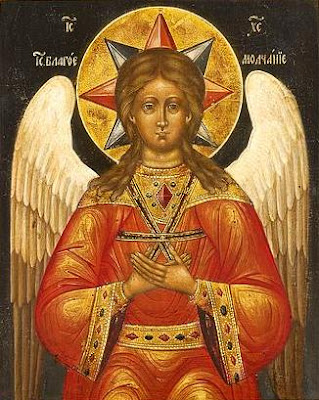 In this icon, Christ is portrayed as a youthful figure looking like a winged angel, his hands crossed against his chest, sometimes wearing a bishop’s mitre and dressed in a sakkos (σάκκος), the vestment worn by Orthodox bishops. In most of these icons, Christ is shown with an eight-pointed, shining nimbus.

The icon of Christ the Blessed Silence represents his sacrifice, through his young face and crossed hands, and his ecclesiastic mission in his attire. His angel-like face and the wings point to his ministry. In some of these icons, Christ is bareheaded, in others he wears the crown of a bishop, to show that he is both the Great High Priest and the King of Kings. In some icons of Christ the Blessed Silence, Christ holds the cross, spear and sponge of the Crucifixion.

This icon is known in Russian as Spas Blagoe Molchanie or the Saviour of the Blessed Silence, and even as the Angel of Great Counsel. The earliest icon in this tradition in mediaeval Rus dates from the late 15th century. Christ is portrayed on the iconostasis or icon screen in the Dormition Cathedral in the Kremlin in Moscow, above the entrance to the sanctuary and dates from about 1482 or perhaps later (1514-1515).

This image was widespread in the 17th century, and it found special reverence in the 18th and 19th centuries among the Old Believers in Russia. Many of these icons were confiscated from the Old Believers and kept in archives in St Petersburg.

The icon of Christ the Blessed Silence Saviour is one of the few types in which Christ is represented in the form of an angel. In these icons, Christ is young and without a beard, looking like an angel or messenger, the angel of the blessed silence. The word angel is derived from the Greek word αγγελος (angelos), meaning a messenger. Saint John the Baptist is often represented with the wings of an angel, because he is described in Saint Mark’s Gospel as an αγγελος (angelos) or messenger. 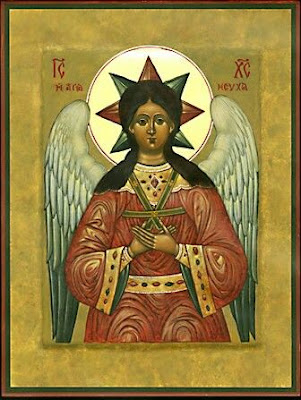 This icon is deeply mystical and symbolic. This is the Christ of the prologue in Saint John’s Gospel, the eternally existing Word.

Christ’s eight-pointed crown or nimbus is known in iconography as the star of the Ancient of Days This crown can be seen as two superimposed squares, one red denoting the Passion, and the other olive green denoting the spirituality of the Trinity. This eight-pointed or crown signifies the six days of Creation with the seventh day of rest and the eighth day, the Day of Eternity, that preceded the Creation and that follows it.

So, Christ as Angel is also the eternal Logos of God, who according to the Nicene Creed, was ‘eternally begotten of the Father.’

The seraphim often depicted hovering above the hands are symbols of the Nativity, but like many iconographic images, they link the birth and the death of Christ, as in the icon of the Crucified Seraph.

So, we have here a representation of the Christ who eternally proceeds from the Father in sacred Silence and the Christ who was born in time to be the Suffering Servant who died in Silence.

This icon is also a Passion-related image, and we can link this icon with the icon that shows the winged Christ as the Crucified Seraph. In the traditional interpretations of Isaiah, the Suffering Servant passages are associated with the crucifixion of Jesus:

So, the suffering Christ was silent, and Christ the Angel of Great Counsel is the Son of God begotten in the Silence of Eternity.

These icons often also bear inscriptions from another passage in Isaiah:

Sometimes Christ holds in his hand a scroll that reads: ‘You are the God of Peace, Father of Mercies, the Angel of Great Counsel.’ These words are in Irmos 5 in the Liturgy of the Nativity:

O God of peace and Father of mercies
Thou has sent to us the Angel of Great Counsel who grants us peace.
So we are guided to the light of the knowledge of God.
Waking early from the night we praise Thee, O Lover of men.

Traditionally, the words of Isaiah 9: 6 are associated with the birth of Christ and the Nativity narratives. They are best known in the English-speaking world because of their use in the libretto by Charles Jennens for Handel’s oratorio Messiah:

For unto us a child is born, unto us a son is given:
and the government shall be upon his shoulder:
and his name shall be called Wonderful, Counsellor,
The mighty God, The everlasting Father, The Prince of Peace.

Jenner was drawing on the text of the Authorised Version or King James Version of the Bible, which reflects the Hebrew text of the Bible as it was known in the 17th century. However, early Christians knew the Biblical texts not in Hebrew, but in the Greek of the Septuagint. In Greek, Isaiah 9: 6 reads somewhat differently:

For a child is born to us, and a son is given to us,
whose government is upon his shoulder,
and his name is called the Messenger of Great Counsel:
for I will bring peace upon the princes, and health to him.
His government shall be great, and of his peace there is no end.

The two texts differ substantially, and the Septuagint often has readings that are not found in translations from the Hebrew Masoretic text. The relevant interesting words here are: ‘his name is called the Messenger of Great Counsel.’

A variant reading of Isaiah 9: 6 found in some Septuagint manuscripts reads:

For a child is born to us, and a son given to us,
whose government is upon his shoulder,
and his name is called Messenger (Angel) of Great Counsel,
Wonderful Counsellor, Mighty God, Potentate,
Prince of Peace, Father of the Age to Come.
For I will bring peace upon the princes and health to him.’

When we think of the icon of Christ the Blessed Silence, we should think both of the Logos begotten from God in Eternity and of the birth of the Christ Child in time.

I am reminded by Dave Evan’s hymn (No 325 in Church Hymnal: