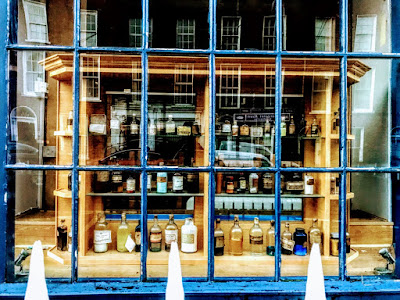 Earlier this week, Charles Dickens’s A Christmas Carol turned 175. It was first published on 19 December 1843 years and has so shaped our image of Christmas ever since that some writers claim Charles Dickens was true inventor of the Victorian Christmas.

Dickens intended that A Christmas Carol should be a moral tale, reflecting the attitudes of the day towards poverty, and in particular child poverty.

Ebenezer Scrooge, the bah-humbug-shouting miser despises Christmas, charity, the poor, and everything apart from his own money. He is visited first by the ghost of Jacob Marley, his dead business partner, and then by the ghosts of Christmas Past, Christmas Present and Christmas Future.

The message gets through, and Scrooge learns to love and celebrate the true meaning of Christmas. Scrooge remembers his lost humanity and learns to see it in others.

No fewer than 160 of the author’s descendants gathered in 2012 to celebrate the 200th anniversary of the birth of Charles. Kilkenny is home to one of these direct descendants, Nicky Flynn (nee Dickens), the owner of Kytler’s Inn. Some years ago, she and her brother Gerald Dickens worked together to stag his one-man show, Mr Dickens is Coming, described as ‘a light-hearted and varied look at the life and character of Charles Dickens.’

During his life-time, Charles Dickens (1812-1870) toured Ireland, reading from and acting out parts in his novels. During his visit to Limerick 160 years ago, in 1858, Dickens stayed at the hotel he referred to as the Royal Hotel. He was visiting Belfast, Dublin and Cork, and in Limerick he was reading on the stages at the Theatre Royal on Henry Street, close to the corner of Mallow Street – a building that was destroyed by fire in 1922.

In a letter to his nephew, Dickens described the hotel and his stay in Limerick in September 1858. The Royal Hotel referred to was Cruise’s Royal Hotel on what was then George’s Street, now O’Connell Street. It was torn down in 1991-1992.

As I walked through Limerick yesterday [20 December 2018], I thought for a moment I had caught a glimpse of Dickensian or Victorian Limerick as I peered into what was once O’Flaherty’s Pharmacy at 37 Cecil Street. 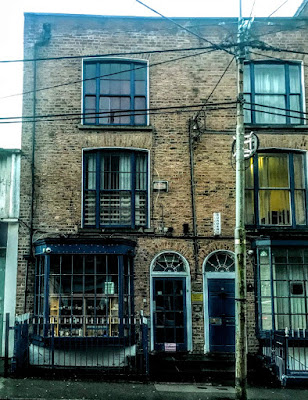 This brick house was built ca 1820. It is an end-of-terrace, two-bay three-storey house over a covered basement, with a three-sided canted oriel shop window on the ground floor. The red-brick walls are laid in Flemish bond with cement pointing. There is mixed brick and rubble limestone on the gabled side elevation and a cement rendered wall at the rear.

The three-sided canted timber oriel window on the ground floor that I found myself admiring has multi-fixed-pane glazing. The timber frieze above once had lettering and an architrave.

The round-arched door opening has patent rendered reveals and a multiple-pane glazed timber door with the decorative original fanlight above. Here again the name ‘O’Flaherty’ has been removed in recent weeks.

Limestone and concrete steps lead up to the front door. The building is enclosed by replacement iron railings and cement paving, and at the rear the site is enclosed by a rubble stone wall bordering the lane leading up to the former Quaker Meeting House.

This house retains important architectural features to the front and rear, and it is part of a terrace of four, slender, three-storey houses that form an attractive feature on Cecil Street.

Sadly, the ‘O’Flaherty’ name has been removed over the front window and door, the shop is closed, and I wonder whether another delightful detail of Dickensian or Victorian architecture is about to be lost in Limerick this Christmas. 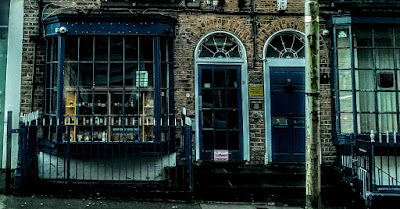 Is another delightful detail of Dickensian or Victorian architecture about to be lost in Limerick this Christmas? (Photograph: Patrick Comerford, 2018)