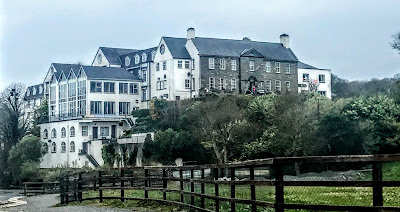 The Falls Hotel in Ennistymon, Co Clare, hides within its walls an 18th century mansion, a late medieval castle, and a history of four or five centuries(Photograph: Patrick Comerford, 2019)

Nestled in a wooded vale in Co Clare beside the tumbling waters of the River Inagh in Ennistymon, it is difficult to visualise how the Falls Hotel hides within its walls an 18th century mansion, a late medieval castle, and a history of four or five centuries that tells of clans and warfare, disputes between landlords and tenants, and visiting poets, dreamers and entrepreneurs.

It seems all the O’Connor properties in the area passed to Turlough O’Brien in 1582, although Ennistymon may have remained an O’Connor castle for a short time after. However, Sir Domhnall is O’Brien founded the branch of the O’Brien family at Ennistymon Castle.

Sir Domhnall was Governor of Clare in 1576 and died in 1579. His son, Sir Turlough O’Brien, became High Sheriff of Clare. Another son, also Domhnall O’Brien, was nominated as Church of Ireland Bishop of Killaloe, but never took office.

At one time, Sir Turlough O’Brien owned over 2,000 acres in the area, including the castle at Ennistymon. In 1588, at the height of the Spanish Armada, he was given permission to arrest and torture any Spaniards found in the country. On the other hand, his son Tadhg O’Brien joined the rebel forces of Red Hugh O’Donnell, and was mortally wounded after a large-scale local skirmish.

By 1619, the Earl of Thomond was recorded as holding ‘the castle, town and three quarters [about 360 acres] called Innisdyman.’

During the Confederate War, in 1645, Sir Daniel O’Brien of Ennistymon Castle was appointed to organise an exchange of prisoners with the commanders of English troops in Connacht. After that war, the Earl of Thomond leased Ennistymon Castle to Neptune Blood in 1656. Three years later it was let to Edward Fitzgerald.

Thomas Moland’s survey in 1703 describes Inishtimond as having a manor, a good castle and a two-storey house, all in good repair.

The farm of "Inishtymond" was granted in 1712 to a John O’Brien of Dublin, who was probably acting on behalf of his relative Christopher O’Brien. According to the lease, the tenant was required ‘… for the preservation of the public peace and Protestant interest … to find, set out, and maintain a man of the Protestant religion, sufficiently fitted and furnished with a horse, sword and case of pistols …’

Christopher O’Brien died in 1743 and was succeeded by his eldest surviving son, Edward O’Brien. He became a member of the Church of Ireland in 1755. In 1764, Edward O’Brien, a descendant of the original Domhnall O’Brien, demolished much of the old castle building. By the late 19th century, few traces of the castle could still be seen.

The castle was rebuilt as Ennistymon House, a Georgian-style building with large sash windows, fine panelling and rococo decoration inside. It was a two-storey, seven bay house over a basement, on a mound facing east towards the Ennistymon falls, with a central one-bay pedimented breakfront, containing a side and fan-lit front door, and a lunette above the second storey window. A yard and stabling stood some distance to the north-west.

The house passed to Ann O’Brien and her husband, Matthias Finucane, in 1792. A year later, Ann was divorced by her husband by a special Act of Parliament. But because she was deemed to be the ‘guilty party,’ Ennistymon House remained in the Finucane family. 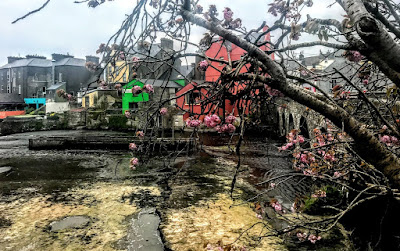 The Cascades at Ennistymon, between the bridge and the Falls Hotel (Photograph: Patrick Comerford, 2019)

The Finucane family continued to live at Ennistymon House throughout the early 1800s. When Andrew Finucane died without heirs in 1843, the house passed to his brother-in-law, Major William Nugent Macnamara (1775-1856) of Doolin, who had married Susannah Finucane in 1798. She, in turn, was a granddaughter of Edward O’Brien, formerly of the Ennistymon House. Susannah died at the age of 39 years after giving birth to six children.

William Nugent Macnamara had a distinguished career. He was a major in the Clare Militia, a Justice of the Peace and High Sheriff of Co Clare. He was also a noted marksman and duellist, and he acted as second to Daniel O’Connell in his duel with John d’Esterre in 1816.

The Catholic Association had originally selected Major Macnamara as its candidate for the Clare byelection of 1828. However, he declined for family reasons, and it was only then that Daniel O’Connell was chosen and in turn enjoyed a famous victory that would prove a turning point in Irish history.

Major Macnamara was elected Liberal MP for Clare in 1830 and held the seat for 22 years until 1852. He was described as ‘a Protestant in religion, a Catholic in politics, and a Milesian in descent.’

Perhaps unusually for his time, Macnamara never remarried, and he died in 1856 at the age of 81. His obituary described him as ‘the poor man’s magistrate,’ and his funeral to the family vault in Doolin was one of the largest ever seen in Co Clare.

Colonel Francis Macnamara (1802-1873) was the only son and heir of William Nugent Macnamara, was born in 1802. He was a captain in the 8th Hussars and a lieutenant-colonel in the Clare Militia. He was MP for Ennis (1832-1835) and was also High Sheriff of Co Clare. His uncle was Admiral Sir Burton Macnamara, who died in 1876.

He married Helen McDermott of Dublin in 1860 and they lived between London and Ennis until 1863, when they made their home at Ennistymon House. They added a west wing to the house to accommodate guests who came to enjoy the shooting and fishing.

Colonel Francis Macnamara renovated Ennistymon House, developed parts of the town, and was responsible for giving Ennistymon its distinctive appearance. In 1876, the Macnamara estate included 15,000 statute acres in Ennistymon, Liscannor, Doolin, Fanore, Ballyvaughan and Carron, with about 700 tenants paying a yearly rent of almost £10,000.

Colonel Francis Macnamara’s eldest son, Henry Valentine Macnamara (1864-1925), was born two years before his parents moved into Ennistymon House. He was educated at Harrow and Trinity College Cambridge, where he graduated BA in 1882. He was a captain in the Royal Carmarthen Artillery Militia and later a lieutenant in the Clare Militia. He also became a justice of the peace, and High Sheriff of Clare in 1885.

In 1883 ‘Henry Vee’ (as he was commonly known) married Edith Elizabeth Cooper, an Englishwoman of Australian descent. He lived at Ennistymon House during the Land War, and relations between landlord and tenant were not always amicable. Later, during the War of Independence, Henry Vee and others were ambushed near Leamaneh Castle in 1919, and he suffered gunshot wounds to his face and arms.

Three years later, in 1922, the IRA told Henry Vee that it was ‘confiscating’ Ennistymon House. The family home in Doolin was burned to the ground. Henry Vee reluctantly left Ennistymon and never returned. He died in London in 1925 at the age of 64. A short time after Henry Macnamara left, Ennistymon House became a temporary barracks for the new police force, the Garda Siochana. 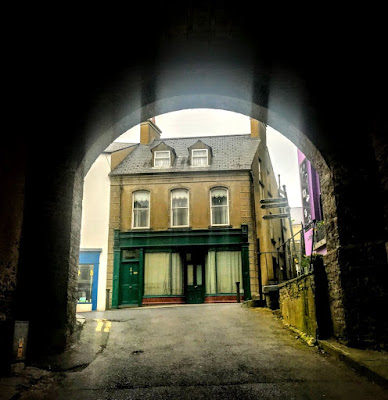 An archway off Main Street leads to the riverside walk to the Falls Hotel (Photograph: Patrick Comerford, 2019)

At an early stage in his life, he turned his back on a career in law for the bohemian lifestyle of London and in 1909 published a collection of poems, Marionettes, some inspired by his home in Ennistymon.

He secretly married Yvonne Majolier in 1911 and they lived together in London. They were the parents of a son, John Macnamara, and three daughters, Nicolette, Brigit and Caitlin.

One daughter, Nicolette Devas (1911-1987), described her unusual childhood in Two Flamboyant Fathers (1966), a memoir full of anecdotes about celebrated figures such as WB Yeats and TE Lawrence. Her sister, Caitlín (1913-1994), married the Welsh poet Dylan Thomas (1914-1953), with whom she had a fiery alcohol-fuelled relationship in London, Ireland, Wales and the USA, spending her last years in Italy.

Francis and Yvonne spent some of their honeymoon in Doolin, and returned many times with other writers and artists, including Augustus John, George Bernard Shaw, JM Synge and Oliver St John Gogarty.

The marriage of Francis and Yvonne broke down and in 1928 he married Augustus John’s sister-in-law, Edie McNeil. At the time, he had plans o turn the family home at Ennistymon House into a country hotel.

After Edie died, Francis married his third wife, Iris O’Callaghan-Westropp of O’Callaghan’s Mills, in 1936. He was then 52, some 30 years her senior, and shortly after they both returned to Ennistymon House which they opened as the Falls Hotel.

Although guests appreciated Francis Macnamara’s, generosity, his hotel management skills were unprofessional. At the end of the 1930s, he leased the hotel for five years to Brendan O’Regan, who later pioneered catering and sales services at Shannon International Airport.

O’Regan ran the hotel during World War II, and Francis and Iris moved into a small house – known as the ‘Henrun’ or the ‘Chateau’ – behind the hotel.

When Brendan O’Regan’s lease ran out, Francis decided to sell the hotel, bringing to an end an almost unbroken connection that stretched back over 400 years to the original O’Briens of Ennistymon Castle. Francis later died in 1946 at the age of 62.

The new owner of the Falls Hotel was a retired Welshman, Gerard Henry Williams-Owen, but he and his family only ran the hotel during the summer months.

When John F Wood and his wife Bridget acquired the hotel in 1955, they added a hydroelectric plant that for many years provided power to the building, and the plant can still be seen a short distance upstream, just below the cascades.

Later, John F Wood’s son Tony and his wife Meg ran the hotel for some years. The current owners of the Falls Hotel are Dan and Eileen McCarthy. The hotel has been extended and improved, and now has 150 bedrooms, a restaurant and bar, and a 400-seat conference and banqueting room.

The Cascades or the Falls are one of the finest features in Ennistymon. They can be viewed from the bridge or from the footpath walk that can be entered through the archway leading off Main Street and along the riverside walk to the Falls Hotel.

This stretch of the river, from the bridge to the deep water near the Falls Hotel, is a popular trout and salmon fishing beat, especially when the river is in flood. Favourite pools by the Cascades were known as Tuneys, the House, the Big Rock, the Salmon Hole and the Eel Hole.

The Bridge at Ennistymon is a seven-arch rubble stone road bridge built over the river ca 1790. The Board of Fisheries built a fish pass on the river in 1961 to allow salmon to migrate upstream to breed. 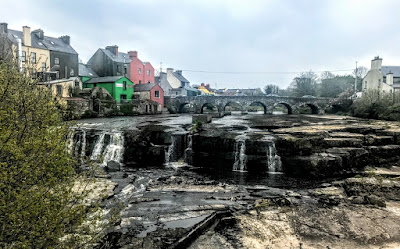 The Bridge at Ennistymon is a seven-arch rubble stone road bridge built over the river around 1790(Photograph: Patrick Comerford, 2019)