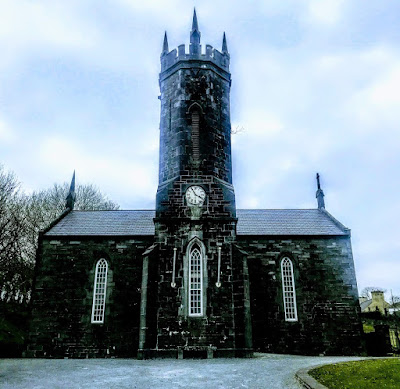 Teach Ceoil at the top of Church Street in Ennistymon, Co Clare, is the former Saint Andrew’s Church, once the Church of Ireland parish church (Photograph: Patrick Comerford, 2019)

Before the busy period of Holy Week and Easter arrive, I spent a quiet Saturday afternoon in Ennistymon, a colourful and pretty town in north Clare, walking by the Cascades and the banks of the River Annagh and the Cascades, enjoying the colourful shopfronts and cafés, learning about the story of the town’s former castle, and visiting three churches and their sites.

In the ecclesiastical divisions of the Church of Ireland, the parish of Ennistymon has been part of the ancient Diocese of Kilfenora. The parish church, Saint Andrew’s, has been closed for decades, and the parish is now part of the Drumcliffe Group of Parishes based in Ennis. But the town remains of interest to anyone engaged with the history of the Church of Ireland in the Diocese of Limerick and Killaloe.

Teach Ceoil at the top of Church Street in Ennistymon is the former Saint Andrew’s Church. This is a three-bay, double-height Gothic Revival church, built in 1830-1831, with a central octagonal-plan two-stage entrance tower. The octagonal tower was added shortly after, built by the same masons. 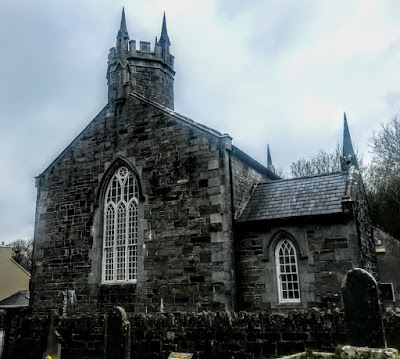 Saint Andrew’s Church was built by the Ven John Whitty (1779-1864), Archdeacon of Kilfenora and previously Rector of Kilrush, with a grant of £1,000. He was born in Kilrush, Co Clare, the son of the Revd Irvine Whitty (1754-1842). Three successive generations of this branch of the Whitty family were priests in the Diocese of Kilfenora: the Revd Irvine Whitty (1754-1842), Archdeacon John Whitty (1779-1864) and Canon Henry Whitty.

Archdeacon Whitty was educated at Trinity College Dublin, graduating BA in 1800. He was Rector of Kilmanaheen (Ennistymon), Archdeacon of Kilfenora from 1822, a local magistrate (JP), and lived at the Glebe House in Ennistymon.

Archdeacon Whitty died at Cotham park, his son’s house in Bristol, in 1864.

Henry Valentine Macnamara of Ennistymon House installed the clock in the tower in 1900 in memory of his father, Colonel Francis Macnamara. 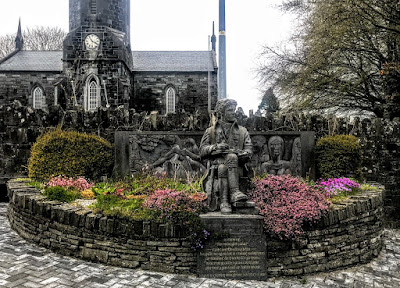 The statue of the poet Brian Merriman (1747-1805) outside the former Saint Andrew’s Church (Photograph: Patrick Comerford, 2019)

Saint Andrew’s was always known by the people of Ennistymon as the ‘New Church.’ It only ever had a small congregation. Sunday services ceased in the 1960s. Saint Andrew’s was deconsecrated in 1964, and in 1986 the church was given by the Representative Body of the Church of Ireland to the local branch of Comhaltas Ceoltoiri Eireann in 1986. Since 1989, the church is now known as An Teach Ceoil (the House of Music).

Inside, the church still has many of its original features, including brass and marble memorial plaques, a timber carved pulpit and the pews.

To the right of the entrance is a monument to Brian Merriman (1747-1805), the Ennistymon-born poet who wrote Cúirt an Mhéan Oíche, the epic poem that has been translated into The Midnight Court, and is a cultural centre for Irish music, dance and song. 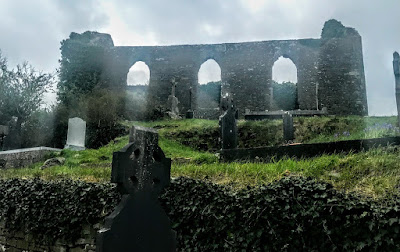 The first church in the parish is said to have been at Kilmanaheen, north of Ennistymon, where Saint Mainchin built a church ca 580 AD on the dún or residence of Baoth Bronach, King of Corcomroe.

Archdeacon Whitty’s ‘New Church’ replaced the ‘Old Church’ built above the town on the summit of Church Hill in 1775-1778.

The nave-and-chancel church was built in 1775-1778 by the Ven James Kenny, Archdeacon of Kilfenora and Rector of Ennistymon. It features a single Gothic door, three windows on the north and one on the east side, and measures 14 by 7 meters.

Archdeacon James Kenny left the Roman Catholic Church and was appointed the first Church of Ireland Rector of the parish of Kilmanaheen, the ecclesiastical name of Ennistymon. Kenny received a grant of £390 to build a church on this prominent site and the church was completed in 1778. In his 45 years in the parish, Kenny was a controversial rector and lived in fine circumstances in the glebe at Kilmanaheen outside the town.

During his time, it is said, 45 local Roman Catholics joined the Church of Ireland. The church was damaged in 1798-1799 during the United Irish rebellion, and the doors and windows of the church were smashed.

This was a church with an unadorned nave and chancel. It fell into ruin soon after Archdeacon Whitty built Saint Andrew’s Church in 1831.

The graveyard was originally used by Church of Ireland parishioners, but during Kenny’s time there were only two burials, and they were members of the Finucane family, former residents of Ennistymon House. The inscribed slabs on the Finucane tomb date from 1820, and are of local interest.

After 1829, the churchyard was used for Roman Catholic burials. Several Christian Brothers from Mount Saint Joseph Monastery are buried there in graves marked by small black crosses with their names traced in Irish.

The church and graveyard preside over the town from their grassy eminence. Here the views over the town of Ennistymon and the surrounding countryside of north Clare and out across Lahinch to the Atlantic are spectacular. 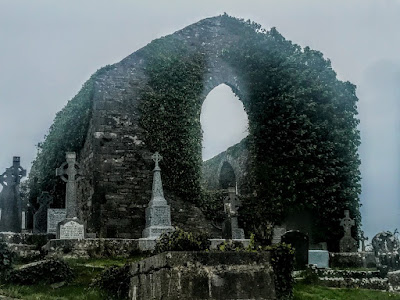 The ‘Old Church’ and graveyard preside over the town from their grassy eminence above Ennistymon (Photograph: Patrick Comerford, 2019)

In the Roman Catholic arrangement, the Diocese of Kilfenora was amalgamated with the Diocese of Galway in 1866. An older 19th century church was replaced in the mid-20th century by the Church of Our Lady and Saint Michael on Lahinch Road, built in 1948-1954.

This was one of the first modern designed churches built in Ireland, a decade before Vatican II, and opened on 8 December 1954. It was designed by the architect Frank Corr to seat 1,000 people, and the contractors were Farmer Brothers.

An interesting feature of the church is the Stations of the Cross, painted in frescoes by the Dominican artist Aengus Buckley OP in 1955. 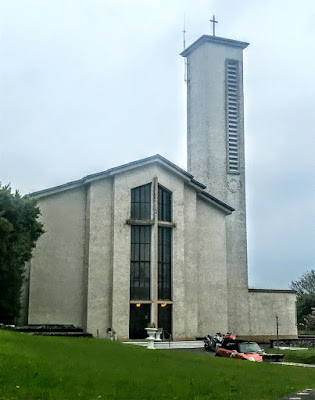 The Church of Our Lady and Saint Michael on Lahinch Road, built in 1948-1954, is one of the first modern designed churches built in Ireland (Photograph: Patrick Comerford, 2019)