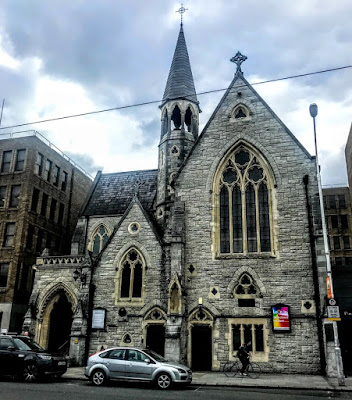 The Unitarian Church on Saint Stephen’s Green, Dublin, was designed by Lanyon, Lynn and Lanyon and opened in 1863 (Photograph: Patrick Comerford, 2019)

I received a request earlier this week to use my photograph of the Wilson window in the Unitarian Church in Dublin on a local history site in Stillorgan.

So, on my way to the book launch for Marriage and the Irish in Dublin on Tuesday evening, I revisited the Unitarian Church on the west side of Saint Stephen’s Green.

This is Dublin’s only Unitarian Church and first opened its doors 156 years ago, on Sunday 14 June 1863. The church was designed in the Decorative Gothic style – the style rejected by Newman for the nearby University Church, on the south side of the Green – by Lanyon, Lynn and Lanyon of Belfast between 1861 and 1863.

The church traces its story to earlier Non-Subscribing Presbyterian, Dissenting and Unitarian congregations in Strand Street and Eustace Street, dating back to the 17th century Puritans.

John Abernethy became minister of the Wood Street congregation, in the Aungier Street area of Dublin, in 1730. His refusal in 1726 to subscribe to the Calvinist Westminster Confession led to the formation of the Non-Subscribing Presbyterian Church.

Joseph Priestley, the scientist and ‘discoverer’ of oxygen, was the organiser of modern Unitarianism in England, although not before the Revd Theophilus Lindsey, Vicar of Catterick, Yorkshire, left the Church of England to found the first avowed Unitarian congregation in Essex Street, near the Strand in London in 1774. 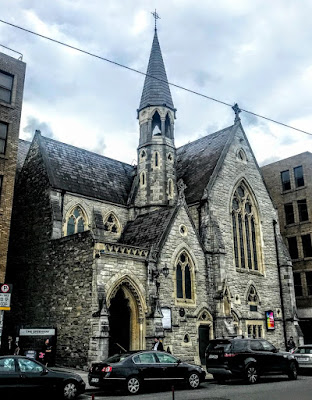 The Unitarian Church on Saint Stephen’s Green owes its existence to the generosity of Thomas Wilson, a wealthy ship-owner (Photograph: Patrick Comerford, 2019)

The present church on Saint Stephen’s Green, Dublin, owes its existence to Thomas Wilson, a wealthy ship-owner and member of the Strand Street congregation. His father, Joseph Wilson, was George Washington’s aide-de-camp and later the first US consul in Dublin.

Thomas Wilson of Temple Street, Dublin, built Westbury in Stillorgan on the site of an older house. He was the senior partner in Joseph Wilson, Son, and was appointed the US Consul in Dublin in 1827. Wilson was a member of the Ouzel Galley Society, a trustee of the Royal Exchange, a director of the National Assurance Company of Ireland, and a governor of Sir Patrick Dun’s Hospital. He also served as a director and Governor of the Bank of Ireland.

A site was bought on Saint Stephen’s Green and an architectural competition in 1861 to find a design for the new church was won by Lanyon, Lynn and Lanyon, whose other works in Dublin include Sanford Parish Church in Ranelagh (1860) and Saint Andrew’s Church (Church of Ireland), ‘an ambitious Gothic church’ also built on a cramped site (1861).

The Unitarian Church is one of the best examples of a modern Gothic church on a narrow street frontage (Photograph: Patrick Comerford, 2019)

A century before the church was built, the west side of Saint Stephen’s Green was known as French Walk, because of the many Huguenots who owned property there. The church site was previously occupied by the Synges, a prominent church family who provided five bishops to the Church of Ireland.

The site for the church was 60 ft wide, and none of the internal corners of the building is at right angles to the other as the existing houses on either side were at an angle to the street. The top of the spire is 97 ft from the street, while the main body of the church is 58 ft long and 46 ft wide.

The external walls are of squared granite rubble, and the decorative portions, both external and internal, are of Bath stone from the Box quarries in England. 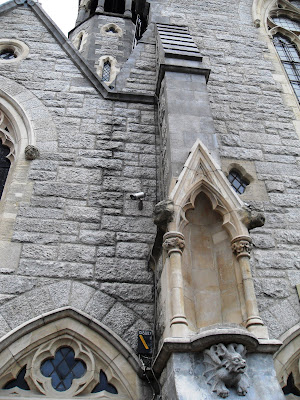 Initially, this looks almost like an Anglo-Catholic church of the period, and – surprisingly, for a non-conformist church – the emphasis in the interior is not on the pulpit, which is to one side of the reredos and table.

On entering, the eye immediately focuses on the reredos, which is on the geographical north side rather than the east side of the church. But there are no images on the reredos – instead it is inscribed with the Beatitudes as a memorial to Sir Andrew Marshall Porter (1837-1919) of Merrion Square, Attorney-General of Ireland.

There is no altar or holy table beneath it, merely a simple, low, long table that might have come from a large and drafty reception room. 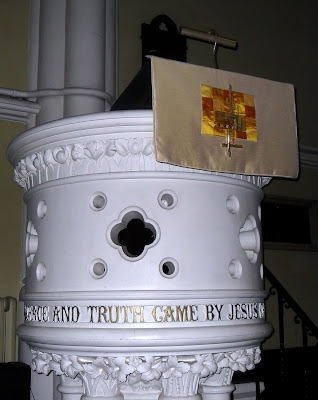 ‘Grace and truth came by Jesus Christ’ ... the pulpit in the Unitarian Church (Photograph: Patrick Comerford) 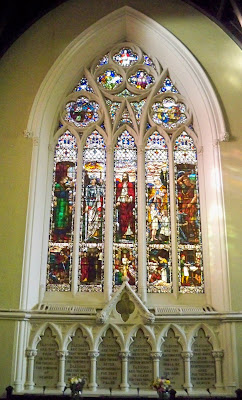 Above the table and reredos, the Wilson Memorial Window is the most impressive part of the interior decoration of the church. This window is one of the first pieces attributed to the revival of the Irish stained-glass industry in the early 20th century.

The window, dedicated on 23 June 1918, features the themes of Discovery, Truth, Inspiration, Love and Work. Christ is the main figure in the window, and the lower parts include images of Christopher Columbus (Discovery), Martin Luther (Truth), the young Christ in the Temple (Inspiration), Florence Nightingale (Love) and William Caxton (Work).

The window was designed by AE Child and is the work of Sarah Purser’s An Túr Gloine or The Tower of Glass studio. 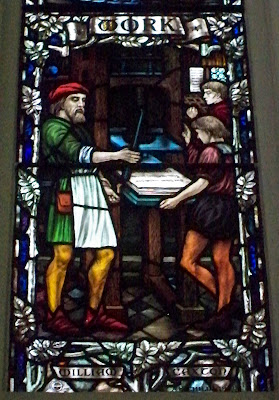 The church has a wealth of French, Flemish and English stained glass. The earliest windows were designed by the Lobin studio of Tours and date from 1865-1868.

Biblical themes in the windows include Palm Sunday (Lobin), ‘Suffer the Little Children to come unto me’ (Lobin), ‘Blessed are the Pure in Heart for they shall see God’ (1891, no signature) and the ‘Good Samaritan’ (by Ethel Rhind).

More recent stained glass windows are by Michael Healy and Catherine O’Brien of An Túr Gloine. 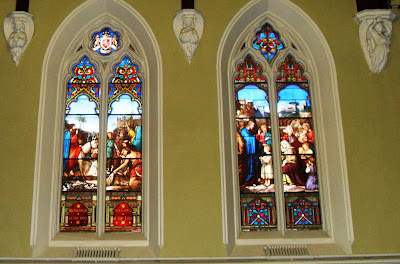 The decorative work on the capitals of the main pillars supporting the four internal arches represents different types of leaves. The decorative, carved angels below the corbelled bases of the main roof trusses and at the top of each pillar represent the ‘whole armour of God’:

‘Stand therefore, and fasten the belt of truth around your waist, and put on the breastplate of righteousness. As shoes for your feet put on whatever will make you ready to proclaim the gospel of peace. With all of these, take the shield of faith, with which you will be able to quench all the flaming arrows of the evil one. Take the helmet of salvation, and the sword of the Spirit, which is the word of God’ (Ephesians 6: 14-17). 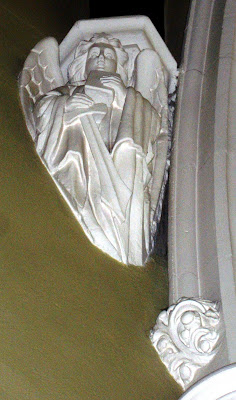 An angel holding the ‘sword of the Spirit’ in one hand, and ‘the word of God,’ represented by the Bible, in the other (Photograph: Patrick Comerford)

The angel on the south-east corner is putting on a girdle, the ‘girdle of truth.’

The angel on the south-west corner is putting on a helmet representing the ‘helmet of salvation.’

The angel on the north-west corner is holding the ‘shield of faith’ on which ‘all the flaming arrows of the evil one’ can be seen breaking up in pieces.

Finally, the angel on the north-east corner holds the ‘sword of the Spirit’ in one hand, and ‘the word of God,’ represented by the Bible in the other.

The original organ was installed in the gallery, but after a fire in 1910 the Walker Organ was bought in 1911 and installed against the south wall where it is today.

Paddy McElroy’s other commissions included work for the basilicas in Knock and on Lough Derg. He died in 2007.

The church basement housed the Damer School which provided education for the Unitarian population and also for many Jewish children. It closed in June 1954. The Damer Hall, as it became known, hosted a professional and amateur Irish-language theatre from 1955 until the late 1970s. The world premiere of Brendan Behan’s An Giall (The Hostage) was staged there in 1957.

This project has since been extended to provide disabled access and renovate the pipe organ, built against the south wall by JW Walker and Sons in 1911. 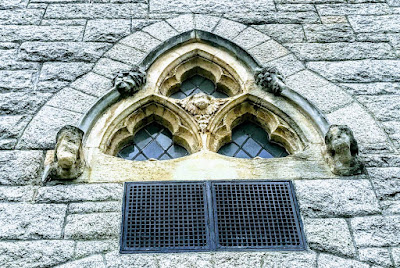 At first, this looks almost like an Anglo-Catholic church of the period (Photograph: Patrick Comerford, 2019)

The Unitarian Church on the west side of Saint Stephen’s Green was described in Lynn’s obituary as ‘the best example extant of a modern Gothic church on a narrow street frontage.’

I have been involved in memorial services in the Unitarian Church in Dublin for deceased members of the staff of The Irish Times, and was invited to preach there on in 2013.

Every time I have visited this church, I have admired the this delightful Decorated Gothic building. But, reflecting on the Christian and Biblical imagery in the windows, carvings, pulpit, pews, memorials and organ, it is hard to grasp how this congregation has moved so far from the Christian roots of the Non-Subscribing Presbyterians and the Puritans before them to whom they owe their origins.

The Dublin Unitarian Church has links with the General Assembly of Unitarian and Free Christian Churches in the UK and with the Unitarian Universalist Church in the US, as well as the Non-Subscribing Presbyterian Church of Ireland. The present minister is the Revd Bridget Spain. 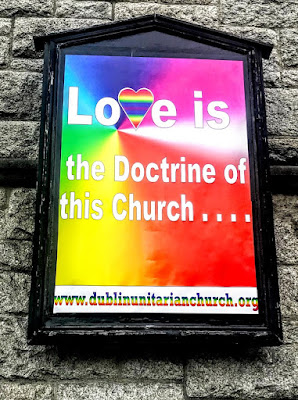