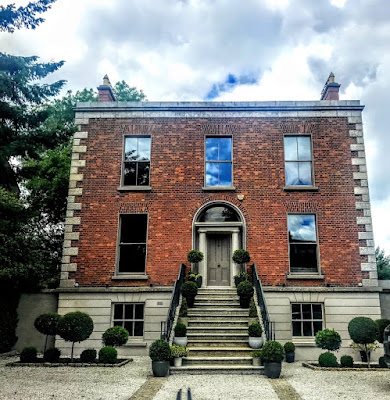 Clarendon at 46 Terenure Road East was once the home of the Curtis family (Photograph: Patrick Comerford, 2019)

One of the many fine Victorian homes between Terenure and Rathgar is Clarendon, a gracious detached Victorian family home dating from the 1840s or 1850s and now on the market at an asking price in the region of €3 million, having been restored by its owners in recent years.

Clarendon was the childhood home of John Curtis (1880-1962), the last Irish Anglican bishop to work in China, and a cousin of the renowned historian Edmund Curtis (1881-1943).

His career was the stuff of schoolboy adventure stories and comic strips: he was a well-known soccer and rugby player; when the Japanese invaded China at the start of World War II, he became a prisoner of war in Shanghai; and he stayed on in China as a missionary bishop after the revolution, living in Hangzhou until he was forced to leave in 1950.

Thomas Henry Curtis, merchant, of Clarendon House, Rathgar, Co Dublin, died on 26 November 1895 at the age of 40. His wife, Edith Elizabeth, had died five years earlier on 29 November 1890 at the age of 35. Both are buried in Mount Jerome, alongside Thomas Curtis JP (1825-1899), and other members of the family.

John Curtis was born in 1880, and spent part of his childhood at Montpellier Hill, near the North Circular Road gate of the Phoenix Park, and then in Blackhall Street, next to the King’s Hospital School. The family moved to Hollybrook Road, Clontarf, and also lived at Clarendon on Terenure Road East.

John was sent to Rathmines School, founded by the Revd Charles William Benson on Lower Rathmines Road, and then studied at Trinity College Dublin.

In his late teens, he played at inside-left for Bohemians, and on the first team in the 1897-1898 season, when Oliver St John Gogarty played at outside-left. They were on the Bohemians team that won the 1897-1898 Leinster Senior Cup final, defeating Shelbourne 3-1 and progressing to the semi-finals of the Irish Cup.

He played again for Bohemians in the following season, one again the winning team in the Leinster Senior Cup final and reaching the Irish Cup semi-final. In the 18 games he played that season, he scored 21 goals.

In 1899-1900, Bohemians got to the Irish Cup final against Cliftonville after John Curtis scored a vital goal in the semi-final against Belfast Celtic in the Jones Road sports ground, now better known as Croke Park. Bohemians lost that final 2-1 in Grosvenor Park in Belfast.

The closest John Curtis came to an international cap was representing Leinster in an inter-provincial game against Ulster. At TCD, he also played both soccer and rugby for Trinity College Dublin.

He was ordained deacon by Archbishop Peacocke in 1903 and priest in 1904, serving first as a curate in Christ Church, Leeson Park. By then, his two younger brothers, Edward (Ned) and Harry, were both playing for Bohemians.

After three years as a curate in Leeson Park, John Curtis volunteered for missionary work with what is now the Dublin University Far East Mission (DUFEM) in China. He arrived in Fujian in south-west China 1906 and worked first in Fujian (1906-1928), and later as Bishop of Zhejiang (Chekiang) until 1950.

He married a fellow missionary, Dr Eda Stanely Bryan-Brown, in Funing 1914. World War I broke out a few weeks later, and in 1916 John returned to Europe and became an army chaplain in Egypt, East Africa and Macedonia in northern Greece, where he was chaplain in Thessaloniki with the Royal Dublin Fusiliers. Coincidentally, his brother Harry was an officer in Thessaloniki at the same time.

John and Eda returned to China in 1919. At one stage, he wrote with insight from Funing: ‘The situation out here politically is more and more perplexing. It seems as if we are drifting nearer and nearer to some sort of a “Red China”.’

Undaunted, he stayed on in the region until 1926. The Diocese of Zhejiang (Chekiang) became vacant with the retirement of the Dublin-born Bishop Herbert James Molony (1865-1939), and John Curtis was elected the new Bishop of Zhejiang.

When he was consecrated in 1929, he was the first foreign-born bishop of the Anglican Church in China (CHSKH, Chung Hua Sheng Kung Hui, literally the Holy Catholic Church of China) to be consecrated in China. His consecrating bishops included his predecessor, Bishop Molony, and the Chinese-born Assistant Bishop of Zhejiang (Chekiang), TS Sing. The other consecrating bishops included the Bishop in North China, FL Norris, an SPG missionary, and the Bishop in Shantung, Thomas Arnold Scott.

As Bishop of Zhejiang, John Curtis lived in Hangzhou, once described by Marco Polo as ‘the City of Heaven, the most beautiful and magnificent in the world.’ The diocese covered 36,680 square miles, and by 1950 had a population of 23 million, of whom 11,574 were Anglicans.

The diocese was divided into three areas: Ningbo (Ningpo), Linhai (Taichow) and Hangzhou (Hangchow), where he lived. In addition, a special commission from the Archbishop of Canterbury extended Bishop Curtis’s jurisdiction to the 3,000 Anglicans in the so-called ‘English congregations in Shanghai, including Holy Trinity Cathedral, Shanghai.’

In his first years in office, Curtis worked on bravely despite banditry, civil war and famine throughout his diocese. ‘In his long journeys about his diocese, mainly on foot, he was a hard man to follow,’ the Dean of Holy Trinity Cathedral, Shanghai, later recalled. ‘In a New Year’s sermon in the cathedral, with an unconscious Irishness, he urged us to “advance in all directions”.’

During his time, there was real growth in Sunday schools and in the work of women missionaries. After 25 years of separate existence, the Chinese CMS was incorporated into the Zhejiang diocesan board of missions in 1930, making mission an integral part of the life and work of the diocese.

With the advance of the Japanese invading forces, large areas of the diocese came under Japanese control, schools were closed, and ordination candidates were sent out of the diocese to Nanjing. On Christmas Day 1937, 90,000 Japanese troops entered Hangzhou. As living conditions deteriorated, Curtis constantly visited the hospitals, medical camps and refugees, his overcoat pockets bulging with bottles of milk for the children. On what he called his ‘milk rounds,’ he also shepherded large numbers of frightened women and children to the safety of the refugee camps.

By June 1938, only three districts of diocese remained outside Japanese control. But Curtis spent six weeks touring the whole diocese that autumn. By 1940, the number of baptised Anglicans in the Diocese of Zhejiang was 12,000 – more than double the number in 1920. However, in September 1942 all the missionaries were called in for questioning. Curtis was arrested in November and taken to the Haipong Road Camp in Shanghai and then held in Stanley Camp, Hong Kong. On one occasion, the Japanese threatened to shoot him if he continued to criticise their treatment of his fellow prisoners, but it was said that in internment he was a great asset to the morale of the camp.

After World War II, some Irish Anglican missionaries began to return to China, but Curtis reported: ‘We are further away from self-help now than when I came here 17 years ago.’ At the end of his career, he appeared depressed about the prospects of the Chinese church surviving on its own. Yet he agreed it could be said ‘we are passing from mission relationships to Church relationships.’

Eventually, John and Eda were forced to leave China for the last time in 1950. They moved to England, and he became the vicar of Wilden in Worcestershire. They eventually retired to Leamington in 1957.

John died suddenly on 11 July 1962 at the age of 82, and Eda died 18 months later. In an obituary in the Church Times, a former Dean of Holy Trinity Cathedral, Shanghai, wrote of him: ‘He was a faithful father in God, a wise counsellor and a sympathetic friend … memories of him we shall treasure, and lives shaped by his influence and example will carry on God’s work which he loved and made so attractive by his own life and ministry.’

A CMS missionary in China at the time, WRO Taylor, recalled Curtis as a bishop with ‘distinctively Irish gifts’ that were valued in non-Anglican ecumenical circles which had little use for bishops.

John and Eda Curtis were the parents of two sons, John Guy Curtis (1919) and Arthur Bryan Curtis (1924), and a daughter Joan. The eldest son John died in a flying accident in January 1943. He was an RAF pilot and was only 23. Their daughter Joan married and moved to Sligo.

Their surviving son, Arthur Bryan Curtis, studied at Oxford and served in World War II. Arthur played rugby for Oxford University and London Irish, and in 1950 won three Irish international caps as a flanker. He later became a headmaster in Zimbabwe.

Arthur’s son, David Curtis played cricket for Oxford and also played Rugby for Ireland, winning 13 caps and appearing as a centre during the 1991 Rugby World Cup. Continuing a family tradition, David’s sons Angus and Graham are playing Rugby with Ulster and Angus has been capped for Ireland at under-20 level.

Many years after the Curtis family had left Clarendon, the house on Terenure Road East was the home of Colonel Charlie Russell, a combat pilot with the RAF in World War I who became the founder of Aer Lingus.

The year 1934 brought triumph and tragedy to the Russell family. In May that year, Colonel Russell outlined the plans for a new national airline. But four months later, Russell witnessed the death of his nephew, Captain Arthur Russell, in a plane crash in front of Clarendon.

Arthur Russell, who had followed in his uncle’s footsteps as a pilot, had taken an Irish Air Corps Fairey plane up from Baldonnell and was trying to impress his uncle by buzzing his house. But he flew too low, and collided with the top of a tree right opposite Clarendon. Colonel Russell stepped outside just in time to see his nephew’s plane explode in flames. Arthur was killed instantly.

Fascinating. You are making me so homesick!