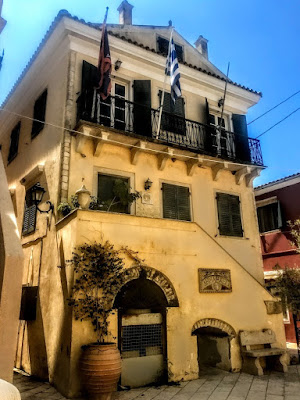 The town hall in Gaios on the island of Paxos … John Young proposed converting the neighbouring islands of Corfu and Paxos into British colonies (Photograph: Patrick Comerford)

Young, who later became Lord Lisgar, is commemorated in stained glass windows in the Church of Ireland parish church in his native Bailieborough.

John Young was born into an Irish family in Bombay on 31 August 1807. His father, Sir William Young, of Bailieborough Castle, Co Cavan, was a director of the East India Company; his mother, Lucy, was a daughter of Lieutenant-Colonel Charles Frederick.

He married Adelaide Adelaide Annabella Dalton, daughter of Edward Tuite Dalton of Fermor, Co Meath, and a step-daughter of Thomas Taylor, 2nd Marquess of Headfort, in Kells Parish Church, Co Meath, on 8 April 1835. Young was an MP for Co Cavan from 1831 to 1855. As an MP, he generally supported Sir Robert Peel and was closely linked politically with WE Gladstone and the fifth Duke of Newcastle.

Young was appointed Lord High Commissioner of the Ionian Islands in March 1855, and was knighted as a Grand Commander of the Order of Saint Michael and Saint George, a British order of chivalry associated particularly with Corfu.

The post proved difficult for Young, and the members of the representative assembly or Ionian Parliament which sat in Corfu demanded union with Greece. In a gesture of goodwill in 1857, Young freed prominent patriots, radicals and journalists from Kephalonia who had been jailed or exiled.

In secret dispatches to London in 1858, Young recommended that the neighbouring islands of Corfu and Paxos should be converted into British colonies. However, the private despatches were published in the London Daily News, embarrassing the government, which had just arranged for Gladstone to report on the problem.

Young’s position became untenable and he was recalled from Corfu in January 1859. However, he made a Knight Commander of the Order of the Bath (KCB) and his administration in the Ionian Islands was publicly praised.

Young was replaced as Lord High Commissioner of the Ionian Islands by the future British Prime Minister, William Ewart Gladstone.

Perhaps Young’s intemperate proposals hastened the inevitable, and the Ionian Islands were united to Greece in 1864, realising the hopes that Church and Napier had long cherished for Corfu, Zakynthos and Kephalonia.

Meanwhile, Young was appointed Governor of New South Wales in 1861, although he was not given the title of governor-general held by his two predecessors.

He worked diligently for the Sydney Ragged Schools, the Society for the Relief of Destitute Children, the Sydney Female Refuge Society, the Female School of Industry and the House of the Good Shepherd.

A devout, evangelical Anglican, he appealed for non-sectarian sympathy and tolerance, raising the ire of some Protestants when he chaired a meeting in 1865 to organise rebuilding Saint Mary’s Cathedral.

Lady Lisgar married her second husband, Sir Francis Charles Fortescue Turville of Bosworth Hall, Leicestershire, in 1878. She died at Paris on 19 July 1895. However, Lord and Lady Lisgar are buried together in Bailieborough Church of Ireland graveyard. 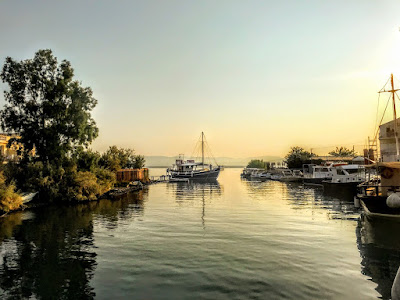 Early morning at the small harbour at Mesongi in Corfu … Young’s proposals for Corfu and Paxos forced his departure from the Ionian Islands (Photograph: Patrick Comerford, 2019)