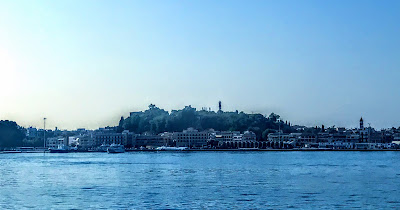 The Harbour at Corfu … Sir Charles Napier first arrived in the Ionian Islands in 1819, when he was appointed an inspecting field officer in Corfu (Photograph: Patrick Comerford)

Oakley House in Celbridge was the childhood home of Sir Charles James Napier (1782-1853), remembered in military history as the conqueror of Sindh. But Napier was also one of the great Irish Philhellenes, and was closely involved with political life in Corfu and the Ionian Islands in the first half of the 19th century.

While he was the British Resident or colonial governor of the Ionian island of Kephalonia, Napier was constantly in conflict with the British administrators based in Corfu. There too he entertained the poet Lord Byron as his guest, and soon became entangled in the political course of events in Greece.

Napier was a first cousin of Lord Edward FitzGerald, one of the leading figures in the 1798 Rising. Napier’s father, Colonel George Napier (1785-1860), was born in Oakley House, Celbridge, shortly after his parents moved into the house.

His mother was Lady Sarah Lennox, an aunt of the 1798 leader, Lord Edward Fitzgerald, and although Charles Napier was born in Whitehall, he was soon brought home to Co Kildare, and grown up close to his Conolly cousins in Castletown House.

Napier first arrived in the Ionian Islands in 1819, when he was appointed an inspecting field officer in Corfu. He was sent on a confidential mission to Ali Pasha (1740-1822) at Ioannina in 1820, and was converted to the cause of Greek independence. When the Greek War of Independence began on 25 March 1821, he started supplying military intelligence to the Greeks and publishing pamphlets in English supporting the struggle.

Despite his reputation with British administrators in Corfu as a radical and a Philhellene, Napier was moved from Corfu in 1822 to become the British resident or effective governor of Kephalonia. There he was an ‘enlightened despot,’ providing roads, bridges and public buildings, assisted by his Irish-born Director of Public Works, John Pitt Kennedy (1796-1879), the son of a Church of Ireland rector from Co Donegal.

Napier also played host on Kephalonia to the most famous of the British Philhellenes, the poet Lord Byron. However, faced with continual opposition from British administrators in Corfu, Napier was worried that Byron’s presence on the island and the visitors he was receiving threatened his own position.

Byron left Kephalonia on 30 December 1823, and arrived at Missolonghi on 5 January 1824, hoping he would soon be joined by Napier as commander-in-chief of the Greek army. But Byron died there on Easter Sunday, 18 April 1824; the day before he had said: ‘I wish Napier … [was] here, we would soon settle this business.’

Three days after Byron’s death, the Irish Philhellene, Captain Edward Blaquière from Dublin, arrived back in Zakynthos with the first instalment of a British loan. Within days, Byron’s coffin began its journey back to England on board the Florida, the ship that brought Blaquière back to Greece. Blaquière now tried to recruit either of two Irishmen, Sir Richard Church’s friend Count Laval Nugent or Napier, as commander of the army.

Long after Byron’s death, Napier continued to hope he would become the Greek commander-in-chief, hopes harboured too by his friends among the Greek leadership, including Kapodistrias from Corfu and Mavrokordatos. But the appointment never came, and the command was offered instead to Sir Richard Church from Cork.

Napier eventually left Kephalonia, leaving his Greek-born daughters behind. He returned occasionally to Ireland, visiting his friend Kennedy, the rector’s son from Donegal, at Glasnevin, but eventually made his name as the Conqueror of Sind in India.

Napier’s time in Kephalonia ‘was probably the happiest in his life.’ There he lived with a young, beautiful, proud and patriotic Greek woman, Anastasia. Although they never married, she was the mother of his two daughters: Susan Sarah, born in 1824 and named after Lady Susan O’Brien and Lady Sarah Napier but often known in the family as ‘Piggy’; and Emily Cephalonia, named after Lord Edward FitzGerald’s mother and Napier’s beloved Greek island.

Anastasia obstinately refused to marry Charles, and also refused to accompany him on a visit to England in 1824. Two years later, as he was leaving for London for his mother’s funeral, he tried to leave their two small daughters with Anastasia, but she put the girls in a small boat, pushing them out to sea after him.

The two girls were rescued by a local fisherman, and eventually, after being reunited with their father, were entrusted once again to the care of John Pitt Kennedy from Co Donegal.

Anastasia’s identity has never been established with certainty. Perhaps she was the beautiful young girl who at the age of 16 he had rescued from a convent where she had once been forced to become a nun by her aunt, the abbess. Charles once wrote, ‘The only things that bore me are the church and convent affairs, excepting a beautiful nun of sixteen who dislikes being one very much, and I have blowed up her old devil of an aunt, the abbess, for making her one. Nay more! I told the girl’s friends that if she would run away with a handsome young Greek, I would, as head of the church, stand between them and all harm.’

Anastasia died at a young age. But for the rest of his life, and perhaps even after it through bequests, Charles supported her relatives in Kephalonia.

To the surprise of family and friends, Charles Napier married the poor and invalided Elizabeth Kelly in April 1827. She was a widow of over 60 with grown-up children and grandchildren who were almost grown-up too. The two returned to Kephalonia in July 1827, but we are left with no account of what she thought of the Ionian Islands.

Napier left Kephalonia with his gravely ill wife Elizabeth in 1830, this time leaving his two young daughters in the care of a clergyman named Dixon and his wife at the Monastery of Apostolos Andreas in Perata, close to Saint George’s Castle on the southern end of the island. While Napier was on leave in London that year, his appointment to Kephalonia was annulled, his papers were seized and he was forbidden to return to Kephalonia.

Napier may have been offered and declined an alternative positing on neighbouring Zakynthos, but moved instead to the south of England. Early in 1831, Kennedy also left Kephalonia for Ireland, never to return.

Some time later, Edward Curling left Kephalonia, taking Napier’s two daughters from the convent at Aghios Andreas and bringing them to their father in England. Until Napier’s elderly wife Elizabeth died on 31 July 1833, she treated the girls as her own children. When she knew she was dying, wrote a book, the Nursery Governess, to help Napier find someone to care for them after her death. Napier took an active interest in their education, teaching them geography and maths as well as languages.

Edward Curling was a great nephew of Elizabeth Napier and had worked for Napier on Kephalonia from 1828 to 1831. Some time ago, a member of his family contacted me with further family details that links this episode in the story of the Irish Philhellenes and Newcastle West, one of the towns in my group of parishes in West Limerick and North Kerry.

When Edward Curling left Kephalonia, he brought his Maltese wife Rosa (nee Mallia) to England with him and obtained a post as the Land Agent to Sir Henry Bunbury’s estate near Bury in Suffolk. Sir Henry Bunbury had married Charles Napier’s sister, Emily Louisa Napier, and Lady Sarah Lennox, mother of Emily and Charles, had been first married to Sir Henry’s uncle.

Edward worked on the Bunbury estate for 16 years before moving to Newcastle West, Co Limerick, as the land agent for the Devon estate, centred on the castle in Newcastle West.

Another Irish figure in the Ionian Islands, John Augustus Toole (ca 1792-1829), came to Kephalonia as a member of Napier’s staff, and worked closely with Kennedy on building the roads and bridges. By the winter of 1826 and 1827, Toole was among the supporters of Kapodistrias who organised their activities from Corfu under the cover of a charitable committee. 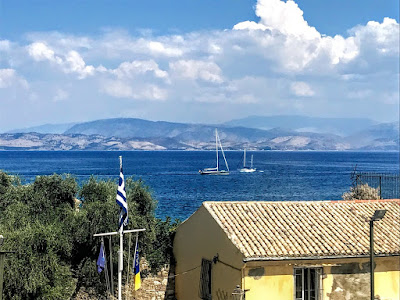 The Harbour at Corfu seen from the Palace … Sir Charles Napier was moved from Corfu in 1822 (Photograph: Patrick Comerford)