Finding Philhellenes
and poets in the
side streets of Corfu

A street in Corfu honours the memory of the Philhellene Lord Guilford (Photograph: Patrick Comerford, 2019)

Like every Greek city and town, Corfu has street names that commemorate philosophers, poets and politicians, composers, saints and sinners, as well as figures from the Classics and the arts, Church life, and the history of Greece’s struggle for independence and unity.

As I wandered around the streets of Corfu over the past two weeks, I noticed a park named after the Durrell brothers, who lived in Corfu, and a street named after the British Philhellene, Lord Guilford.

The younger Frederick North was educated at Eton and Christ Church, Oxford. He secretly converted to Orthodoxy during his first visit to Corfu, and was baptised on the night of 23-24 January 1791 (OS) or 3-4 February (NS) 1791, probably in the Church of Panagia Mandrakina.

Metropolitan Kalistos Ware has debated the degree to which he was a practicing member of the Greek Orthodox Church and the actual date of his baptism in his paper ‘The fifth Earl of Guilford and his Secret Conversion to the Orthodox Church’ Anglicanism and Orthodoxy: 300 years after the ‘Greek College’ in Oxford.

He was the first British Governor of Ceylon (1798-1805) before succeeding his elder brother as the 5th Earl of Guilford in 1817. He moved to Corfu, and in 1824 established the Ionian Academy on the island, then under British administration as part of the United States of the Ionian Islands, and this became the first university in modern Greece.

The academy has since closed, but a there is statue of Guilford in front of the Old Fortress in Corfu, close to the Church of Panagia Mandrakina, where he was baptised, and a library and a street in the town are also named after him. 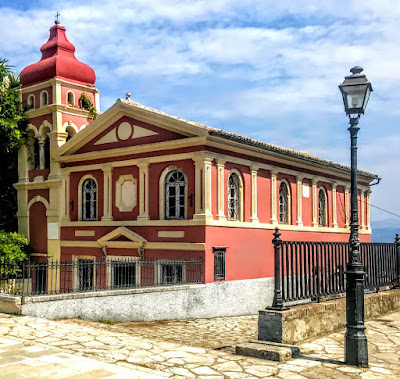 Frederick North was secretly baptised in the Greek Orthodox Church during his first visit to Corfu in 1791, probably in the Church of Panagia Mandrakina (Photograph: Patrick Comerford, 2019)

Holy Trinity Church, the Anglican church in Corfu, opens onto a side-street off Guilford Street that is named after the poet and chess player Lorentzos Mavilis (Λορέντζος Μαβίλης) who is best known for his sonnets.

Lorentzos Mavilis (1860-1912) was born on the Ionian island of Ithaki on 6 September 1860, but lived for most of his life in Corfu, and his family background is an interesting example of the cultural mosaic that has contributed to modern Greek identity.

The poet’s mother, Cecilia, was born Cecilia Capodistria-Suffi in Corfu in 1839, the daughter of Baron Andrea Capodistria-Suffi, who was descended from one of the Venetian noble families of Corfu. Some accounts say she was a niece of Ioannis Kapodistrias (1776-1831), the first Governor of Greece, who is considered the founder of the modern Greek state and the architect of Greek independence.

Mavilis went to Athens in 1877 to study philosophy and literature, and there he began to write poetry. He then moved to Germany, where he studied philology and philosophy, and began his life’s work on chess problems.

A fellow student from Corfu, Helias Pantazopoulos, wrote to Lorentzos’ mother, telling her that ‘German girls call him the new Apollo,’ describing he spoke five languages fluently, and reporting on his drinking and duelling. It was rumoured he had grown his beard to cover a scar received in one sword duel.

Pantazopoulos quotes Mavilis saying: ‘All philosophical systems are intellectual exercises, like a good game of chess. They are not related with truth at all …’

Lorenztos returned to Corfu in 1884 for a short time, but he was soon back in Germany and earned his PhD at the University of Erlangen in 1890, where he was appointed professor of classical studies.

He supported the Goudi coup in 1909 that led to the eventual appointment of Eleftherios Venizelos as Prime Minister and that put an end to the old political order. He was elected as a member of the Greek Parliament for Corfu in 1910. As a deputy, he took part actively in the debates about the Greek language. He was a champion of the use of the language of the people, or demotic Greek, as opposed to the artificial or purified form known as katharevousa (καθαρεύουσα).

He told the Greek parliament in 1911: ‘Vulgar Language does not exist. There is a vulgar people, and many vulgar speakers of the Language of the scholars.’ Those words are paraphrased in popular Greek lore as: There are no vulgar words, only vulgar people.’

As a poet, Mavilis is seen as the last representative of the Heptanesian School of poets, founded by Dionysios Solomos, and he is regarded as Greece’s most important sonnet writer.

The core theme throughout all Mavilis’ works is his love for Greece. His most notable sonnets – including ‘Fatherland,’ ‘For the Fatherland,’ ‘Olive’ and ‘In the Fullness of Time’ – are all odes to Hellenism, to all who gave their lives for Greece and the higher values of life that lead to virtue.

Mavilis was also an avid chess player and a renowned composer of chess problems, playing chess under the pseudonyms of Sillivam and Dr L Greco. As a polyglot, he translated many works, including poems by Shelley and Lord Byron, the works of Virgil and part of the Indian epic Mahabharata.

At the outbreak of the First Balkan War in 1912, Mavilis enlisted as a volunteer in the Greek army, although by then he was already 52, and became a captain in a group of volunteers from Italy under the command of Ricciotti Garibaldi.

During the Battle of Driskos, near Ioannina, he was shot in the face and throat and died on 28 November 1912. His dying words were: ‘I was expecting honours from this war, but not the honour to sacrifice myself for Greece.’

His last sonnet was found in the pocket of his uniform.

His passionate affair with the Greek poet and actor Myrtiotissa – born Teona Draκopoulou (1885-1965) in Constantinople – inspired much of her love poetry. His sonnet Ληθη (‘Lethe’, or ‘Oblivion’) is a pessimistic poem in which Mavilis mingles ancient Greek belief about the underworld, described by Homer in the Odyssey (XXIV, 1-14), and the modern Greek tradition about the realm of the dead.

It has been set to music by the Greek composer Mikis Theodorakis in ‘Eros and Death,’ four songs for voice and string orchestra.

Lucky are the dead who forget
life’s bitterness. When the sun
goes down and twilight follows,
do not weep however you grieve.

At that hour, souls thirst and go
to oblivion’s icy fountain;
but the water will blacken like slime,
if a tear falls from those they love.

And if they drink cloudy water they recall
crossing asphodel prairies and old pains
that lie dormant within them.

If you must weep at twilight,
let your eyes lament the living;
they long to but know not how to forget.