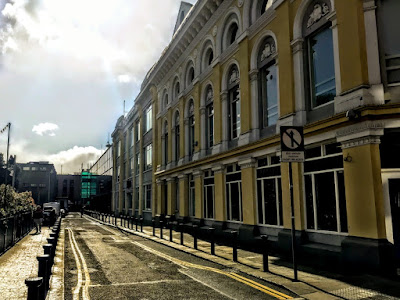 Wolfe Tone Street, Dublin, formerly Stafford Street … the Synagogue at No 40 opened in 1822 and closed in 1835 (Photograph: Patrick Comerford, 2019)

A variety of reasons – including political unrest, economic depression, intermarriage, conversion or assimilation and emigration – led to the decline and disintegration of the Jewish community in Dublin at the end of the 18th century.

When the synagogue on Marlborough Green, off Marlborough Street, closed in 1790 or 1791, Dublin was without a synagogue for a whole generation.

The Irish Naturalisation Act (1783) was repealed in 1816, so that Jews could be naturalised in Ireland. Two years later, the Cohen and Phillips families were still the only Jewish families still living in Dublin in 1818. But in the years that followed immediately, new Jewish families of German and Polish descent arrived from London in Dublin.

In 1822, the few remaining Jewish families in Dublin and a group of Jews of Ashkenazic or west and central European origin formed a new Jewish congregation that met in the home of Joseph Wolfe Cohen at 40 Stafford Street. Cohen was born in Posen, and had moved to Birmingham and from there to Dublin in 1819.

Other members of the new congregation included L Philips (1774-1865), who would be seen as the ‘grand old man’ of the Jewish community by the time he died.

The services in the adapted and enlarged upstairs rooms were conducted by Myer Nerwich, who had arrived in Dublin in 1810 from Posen, now in western Poland. 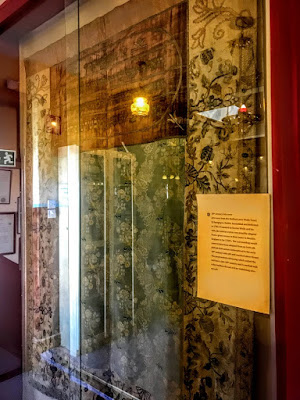 The brocade covers for the Torah Scrolls in Stafford Street Synagogue are among the exhibits in the Irish Jewish Museum (Photograph: Patrick Comerford, 2019)

Joseph Wolfe Cohen was a prominent jeweller and silversmith. When he moved from 40 Stafford Street to 14 Ormond Quay in 1829, the congregation committee rented the rooms Williams and Gibson, and Cohen presented a gift of two Torah Scrolls that he and his brother had rescued from sale by the creditors of the Marlborough Green Synagogue. A third scroll was presented by Reuben Isaac Phillips, and in 1829 the 11 families of the congregation appointed the Revd Isaac Davidson to the three combined roles of reader, shochet and mohel.

JW Cohen became president of the congregation in 1835. But for reasons now unknown the congregation had to leave the premises at 40 Stafford Street, and the synagogue was closed after only 13 years in existence.

The trustees began negotiating to buy premises at 12 Mary’s Abbey that had been used as a chapel or meeting house by a small Presbyterian group known as the Seceders or Anti-Burghers. They would remain there until 1892. 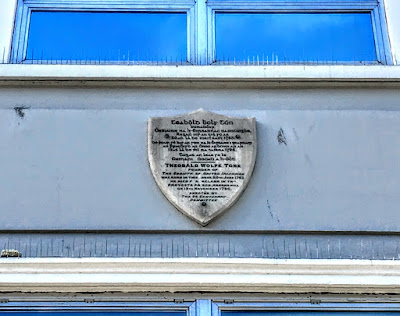 A note on Stafford Street

Wolfe Tone Street runs between Abbey Street and Parnell Street, alongside Wolfe Tone Park, parallel to Capel Street and between Jervis Lane and Jervis Street. However, both the premises at 40 Stafford Street that was home to Dublin’s only synagogue and the house where Wolfe Tone was born have disappeared as this part of Dublin was developed.

The only building on the street to survive from the days of the Stafford Street Synagogue is Saint Mary’s, the former Church of Ireland parish church.

The name of Stafford Street remains a topic for discussion among local historians. Some local history sites say it was named after Thomas Wentworth (1593-1641), 1st Earl of Strafford, who was Lord Deputy of Ireland (1632-1640). However, this misinterprets the spelling of his title, which comes from Strafford in Yorkshire. In addition, Strafford was deeply unpopular in Ireland and was executed in England, so is an unlikely candidate to give his name to any street in Ireland.

The Stafford family held a variety of titles in England, including Baron Stafford, Earl of Stafford and Duke of Buckingham But Roger Stafford (ca 1573-1640), 6th Baron Stafford, was forced to surrender his title because of his poverty in 1637, and the family was said to have become extinct in 1640.

Mary Stafford (1619-1694) was given the title of Countess of Stafford for life in 1688, and her husband, William Howard (1614-1689), became Viscount Stafford and Baron Stafford. But he was accused of taking part in the Titus Oates plot and was executed in 1680. So, this Stafford family is unlikely to have given its name to any street in Dublin.

Another candidate for giving his name to Stafford Street is Sir Humphrey Jervis (1630-1707) from Standon, between Stone and Stafford in Staffordshire. He was Lord Mayor of Dublin during the reign of Charles II, bought 20 acres of the lands of Saint Mary’s Abbey in 1674, and gave his name to Jervis Street. 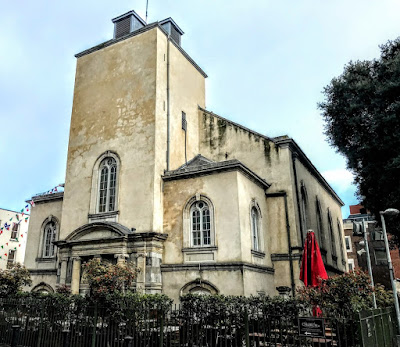