A reference and footnote in
two newly-published books 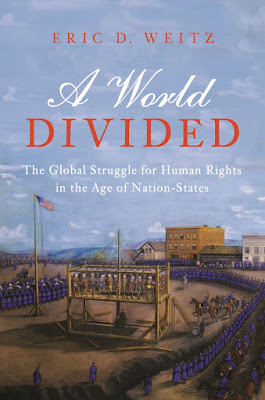 ‘A World Divided’ by Eric D Weitz … a reference to a song of protest by Vassilis Rotas, Mikis Theodorakis and Maria Farantouri

It is always a pleasure to find your name as a footnote in a book, particularly a scholarly book. During my academic career, references and footnotes in books by other academics were important when it came to appraisals of your research and workload.

This was not a matter of vanity, still less one of self-promotion. But it was an important measure of the impact and acceptance of your research. In recent weeks, I have been pleased to come across my name in two recently published books.

A World Divided: The Global Struggle for Human Rights in the Age of Nation-States by Eric D Weitz was published by Princeton University Press on 24 September 2019.

Eric D Weitz is Distinguished Professor of History and the former Dean of Humanities and Arts at the City College of New York (CCNY). He trained in modern German and European history, has a PhD from Boston University Weitz, and has also worked in international and global history. His research interests include Modern Europe, Germany, Labour, International Human Rights and Crimes against Humanity.

This 576-page book is a global history of human rights in a world of nation-states that grant rights to some while denying them to others.

The world was once dominated by vast empires, but today it is divided into almost 200 independent countries with laws and constitutions proclaiming human rights. This transformation suggests that nations and human rights inevitably developed together. But the reality is far more problematic, as Professor Weitz shows in his global history of the fate of human rights in a world of nation-states.

Through vivid histories drawn from virtually every continent, A World Divided describes how, since the 18th century, nationalists have struggled to establish their own states that grant human rights to some people. At the same time, they have excluded others through forced assimilation, ethnic cleansing, or even genocide.

From Greek rebels, American settlers, and Brazilian abolitionists in the 19th century to anticolonial Africans and Zionists in the 20th century, nationalists have confronted a crucial question: Who has the ‘right to have rights?’

In A World Divided, Dr Weitz tells these stories in colourful accounts focusing on people who were at the centre of events. He shows that rights are dynamic. Rights were proclaimed originally for propertied white men, but were quickly demanded by others, including women, American Indians, and black slaves.

This book also explains the origins of many of today’s crises, from the existence of more than 65 million refugees and migrants worldwide to the growth of right-wing nationalism. He argues that only the continual advance of international human rights will move us beyond the quandary of a world divided between those who have rights and those who do not.

In his discussion of the Greek struggle for human right (pp 74-79), he refers to my posting two years ago on the Greek singer Maria Farantouri, who began working closely with the Greek composer Mikis Theodorakis and singing the songs of resistance to the colonels’ regime, which came to power in a coup in 1967 and was toppled in 1974.

Her version of Το γελαστό παιδί (The Laughing Boy) celebrates the uprising in the Athens Polytechnic on 17 November 1973 that led to the downfall of the colonels within a year. The song, composed by Mikis Theodorakis, was first included on the soundtrack of the Costas-Garvas movie Z (1969), and was quickly linked with resistance to the junta.

Some years ago, my friends Paddy Sammon, a former Irish diplomat once based in Athens, and Damian Mac Con Uladh, an Irish journalist from Ballinasloe now based in Corinth, have researched the Irish background to this great Greek classic of resistance to oppression.

The original laughing boy in Brendan Behan’s poem is Michael Collins. Theodorakis adapted the Greek translation, and adapted it in the context of Grigoris Lambrakis, the pacifist activist killed by far-right extremists in Greece in the years before the colonels seized power. As Damian Mac Con Uladh has written, every Greek knows the song can sing some of, which they learned at school commemorations.

Behan adapted the poem in his play The Hostage (1958). The play first came to the attention of Theodorakis while he was living in Paris, and he was inspired to compose a cycle of 16 songs in 1962 with Greek lyrics by Vasilis Rotas (1889-1977).

Rotas’s translation of The Hostage was staged in Athens in 1962 at a time when the Greek civil war was still a taboo topic and left-wing activity was under close police surveillance. The play became a way for people to identify with their struggle against a repressive regime.

Maria Farantouri went into exile after the coup in 1967, and sang this song at solidarity concerts across Europe. ‘It became a hymn not only for the Irish liberation movement, but also for every liberation movement in the world, and Greek democracy,’ she told an RTÉ documentary.

When the junta sent in tanks against protesting students at the Athens Polytechnic on 17 November 1973, killing at least 24 people over a number of days, Maria Farantouri added a couple of stanzas to the song, and changed the date from August to November, deliberately linking the song to that event.

The second reference in recent weeks is in Irish Anglicanism 1969-2019, a collection of essays edited by Kenneth Milne and Paul Harron to mark the 150th anniversary of the disestablishment of the Church of Ireland and published by Four Courts Press, Dublin. This new book was launched in Belfast last week [4 December 2019].

Archbishop Jackson says in his chapter this book ‘recognizes that the Church of Ireland takes its place within a pluralist society in Ireland today.’

The essays in the new book cover topics including the role of women in ministry; the Anglican Communion; dialogue with other churches and faiths; the covenant with the Methodist Church; architecture and art; pastoral care; theological education; the Church and education; liturgy and worship; music in the life of the Church; canonical and legal change; the Irish language; archives and publishing; and the Church and the media.