Hidden stories of Jewish
Bratislava: 6, a wrestler
and a martial arts expert 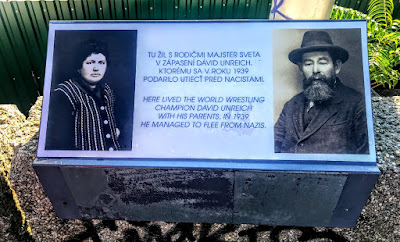 The memorial to David Unreich and his family on the bridge at Kapucínska Street in Bratislava (Photograph: Patrick Comerford, 2019)

An exhibition at the Museum of Jewish Culture in Bratislava in 2017 in honour of the champion wrestler David Unreich (1907-1957), was hosted this year at the Archives of Yugoslavia in the Serbian capital, Belgrade, and at the Slovak mission to the UN in Geneva at the Palais des Nations.

This exhibition presents the story of David Unreich from Bratislava, Jewish wrestler and heavyweight champion of the world. Between the two World Wars, he played an important role in resisting Fascism and its impact on Bratislava’s Jewish community, and after he escaped to the US he continued to take a stand against the Nazis.

David Unreich was born on 15 July 1907 into an Orthodox Jewish family in Bratislava, then known as Pressburg. His father Jonas Unreich was a merchant; his mother Regina or Rachel (née Grünhut), who ran a dining room, was from the same family as Aron Grünhut, the Jewish resistance leader in Bratislava who saved the lives of hundreds of Jews in Bratislava during the Holocaust.

There was a Jewish prayer hall at Kapucínska Street 7, close to Saint Martin’s Gate, until the late 1950s. The prayer hall was located in the basement and people called it ‘Number Seven.’ David Unreich (1907-1957) grew up in the house.

Like his six brothers, David was a member of the ŠK Makkabea Bratislava sports club. When his brothers emigrated to Palestine at an early age, David stayed in Bratislava with his parents.

Standing at 188 cm (6’1” or 6’2”) and weighing 120 kg, he fought in the heavyweight division. He won the district championship in Graeco-Roman style in Bratislava in 1929, and he went on to become a seven-time amateur champion of Czechoslovakia.

He won the title of Jewish world champion at the Maccabee Games in Palestine in 1935. Two years later, he became a professional under the name of Ben Shalom in 1937 and won the European Championship in Riga. He was undefeated over 100 fights in the US from 1938 to 1940.

In 1938, with Imrich Lichtenfeld, the founder of martial arts Krav Maga, he organised a militia in the Jewish quarter of Bratislava to defend Jewish people against anti-Semitic attacks. 1939, after When the establishment of the Slovak Republic was set up as a Nazi puppet state in 1939, Unreich returned to the US, never to come back to Bratislava.

His parents Rachel and Jonas Unreich, his sister Terézia Weissfischová and her children Judita and Miriam were deported in one of the last transports in the Holocaust and were murdered to Auschwitz in 1944. His parents are commemorated by two stolpersteins or stumbling blocks, placed in 2016 on the bridge near the family home on Kapucínská street.

His colleague in the Jewish resistance in Bratislava, Emrich ‘Imi’ Lichtenfeld (1910-1998) was born in Budapest on 26 May 1910, to a Hungarian Jewish family. His parents Janka and Sanuel Lichtenfeld moved to Pressburg, where Samuel was a chief inspector in the police.

Lichtenfeld grew up in the city known today as Bratislava, trained at the Hercules Gymnasium, which was owned by his father who taught self-defence, and from his youth he was a successful boxer, wrestler and gymnast.

Like David Unreich, Lichtenfeld visited British-ruled Palestine in 1935 to take part in the Maccabee Games. He was with a team of Jewish wrestlers, but a broken rib caused during his training on the journey stopped him from competing in the games. The experience led to the his Krav Maga precept, ‘do not get hurt’ while training.

Lichtenfeld returned to Czechoslovakia when increasing anti-Semitic riots threatened the Jewish population of Bratislava. With David Unreich and other Jewish boxers and wrestlers, Lichtenfeld helped to defend their Jewish neighbourhood against racist gangs in 1938. He quickly decided that sport has little in common with real combat and began developing a system of techniques for practical self-defence in life-threatening situations.

On the streets, he acquired hard-won experience and the crucial understanding of the differences between sport fighting and street fighting. He developed his fundamental self-defence principle: ‘use natural movements and reactions’ for defence, combined with an immediate and decisive counterpattack. From this evolved the theory of ‘simultaneous defence and attack’ while ‘never occupying two hands in the same defensive movement.’

Lichtenfeld fled the rise of Nazism in Slovakia for Palestine in 1940. He was among 514 passengers on an old Italian paddle steamer, the Pentcho, when it sailed from Bratislava on 18 May 1940.

The Pentcho sailed down the Danube to the Black Sea and into the Aegean Sea. The engines failed on 9 October and the Pentcho was wrecked off Mytilene in the Italian-ruled Dodecanese Islands. The Italians rescued the passengers and took them to Rhodes, where the local Jewish population looked after them.

Some of the survivors were moved in an internment camp at Ferramonti di Tarsia in southern Italy, but 350 of the original group survived to sail for Palestine. The story of the Pentcho is told by John Bierman in his book Odyssey (1985).

Lichtenfeld reached British-ruled Palestine in 1942, and fought with distinction in the British-supervised Free Czechoslovak Legion in North Africa. The Haganah’s leaders recognised his fighting prowess and ingenuity. In 1944, he began training fighters in physical fitness, swimming, wrestling, use of the knife, and defences against knife attacks.

Lichtenfeld trained several units of the Haganah and Palmach, including the Pal-yam, as well as groups of police officers. In 1948, when the State of Israel was founded in 1948 and the Israeli army was formed, Lichtenfeld became Chief Instructor in Physical Fitness and Krav Maga.

During his 20 years in the Israeli forces, he developed and refined his unique method for self-defence and hand-to-hand combat. Later, he began adapting and modifying Krav Maga to civilian needs, established training centres in Tel Aviv and Netanya.

Lichtenfeld died on 9 January 1998 in Netanya at the age of 87. A plaque to his memory, beneath the slopes of Bratislava Castle and close to the Museum of Jewish Culture on Židovská Street, was unveiled last year [2018]. 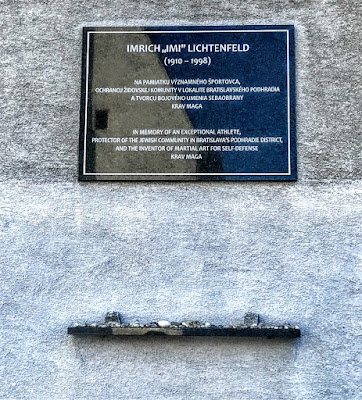 The memorial to Imi Lichtenfeld, close to the Museum of Jewish Culture on Židovská Street (Photograph: Patrick Comerford, 2019)