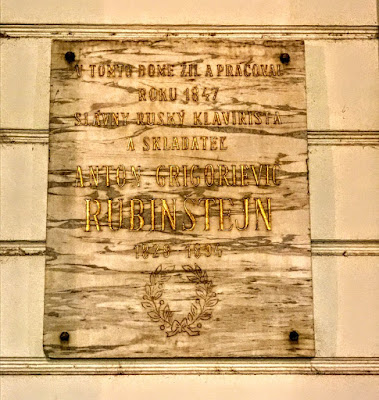 A plaque on the Palais Kutscherfeld on Sedlárska Street recalls Anton Rubinstein’s visit to Bratislava in 1847 (Photograph: Patrick Comerford, 2019)

As I pored over my photographs from Bratislava in recent days, I realised I had also come across many other stories of Bratislava’s Jewish communities, including a resistance hero who saved lives during the Holocaust, a world chess grandmaster and author, an antiquarian bookshop, the lost portal of a mediaeval synagogue, an international wrestler, a visiting Russian pianist and composer, and a man stood up bravely to anti-Semitic gangs.

A plaque on the Palais Kutscherfeld on Sedlárska Street, near the corner of Hlavné námestie (‘Main square’) and just a few paces away from the Dubliner Irish pub and the Loch Ness Scottish pub, recalls a visit the time spent in Bratislava by the Russian pianist Anton Rubinstein (1829-1894).

The Palais Kutscherfeld or the Esterházy Palace is now the French Embassy in the Slovak capital. It was designed in the Rococo style by the architect Jakub Fellner de Fellenthal (1722-1780) and built on Sedlárska Street (then Sattlergasse) in 1762 for Leopold von Kutscherfeld, former governor of Royal Goods and Adviser to the Hungarian Chamber. It was bought by Count Imrich Esterhazy in 1813.

Anton Rubinstein, who stayed here in 1847, was one of the most famous guests at the house, and one of his most famous pieces, the Melody in F from Opus 3, may have been composed here.

Anton Grigoryevich Rubinstein was celebrated for his series of recitals – seven lengthy, consecutive concerts covering the history of piano music. He was a pivotal figure in Russian culture, the composition teacher of Tchaikovsky, and the elder brother of Nikolai Rubinstein who founded the Moscow Conservatory. He wrote 20 operas, including The Demon, composed five piano concertos, six symphonies and many solo piano works, and founded the Saint Petersburg Conservatory.

Anton Rubinstein was born on 28 November (OS 16 November) 1829 to Jewish parents in the Russian empire, in the village of Vikhvatinets in Podolia, now known as Ofatinți in Transnistria in Moldova, about 150 km north-west of Odessa.

Before he was five, his paternal grandfather, Ruben Rubenstein, a merchant from Berdichev, now in northern Ukraine, ordered all members of the Rubinstein family to convert from Judaism to Russian Orthodoxy.

On 25 July 1831, 35 members of the Rubinstein family, starting with their grandfather Ruben, were baptised in Saint Nicholas Church, Berdichev. At the time, Berdichev was an important centre of Hasidism and once had the largest share of Jewish population in any city in Ukraine and the Russian Empire.

The family’s mass baptism, according to the composer’s mother, was a response to a decree by Tsar Nicholas I in 1827 ordering seven out of every 1,000 Jewish children to be baptised.

The composer later wrote: ‘Russians call me German, Germans call me Russian, Jews call me a Christian, Christians a Jew. Pianists call me a composer, composers call me a pianist. The classicists think me a futurist, and the futurists call me a reactionary. My conclusion is that I am neither fish nor fowl – a pitiful individual.’ It is a feeling that is echoed later in similar comments by another great Jewish-born composer Gustav Mahler.

His mother, Kaleria Khristoforovna Rubinstein (1807-1891), a competent musician, began giving him piano lessons at five, until Alexander Villoing heard and accepted him as a student. Rubinstein made his first public appearance at a charity benefit concert at the age of nine. Later that year, his mother sent him to Paris, where he sought unsuccessfully to enrol at the Paris Conservatoire.

Rubinstein and Villoing stayed on in Paris for a year. In December 1840, Rubinstein played in the Salle Érard for an audience that included Frédéric Chopin and Franz Liszt. Against the advice of Chopin and Liszt, Villoing took the young Rubinstein on an extended concert tour of Europe and Western Russia.

Anton was 14, when he and his brother Nikolai, then aged nine, played for Tsar Nicholas I and the Imperial family at the Winter Palace in Saint Petersburg. In 1844, the family travelled to Berlin, where he met Felix Mendelssohn and Giacomo Meyerbeer.

While his father was dying in 1846, Rubinstein was left in Berlin to continue his studies. Now 17, he knew he could no longer pass as a child prodigy. In Vienna, Liszt refused to accept him as a pupil, and he was left living in acute poverty. 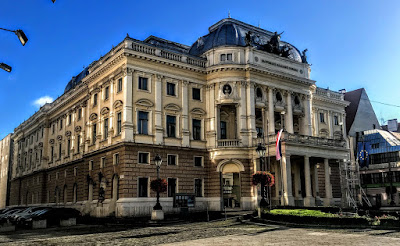 Rubinstein went on a concert tour of Hungary in 1847, and stayed for a while in Bratislava at the Palais Kutscherfeld on Sedlárska Street. When he returned to Berlin, the Revolution of 1848 forced him to return to Russia. He spent the next five years mainly in Saint Petersburg, teaching, giving concerts and performing frequently at the Imperial court. The Grand Duchess Elena Pavlovna, sister-in-law of Tsar Nicholas I, became his most devoted patron. By 1852, he was a leading figure in Saint Petersburg’s musical life.

His first opera, Dmitry Donskoy, was performed at the Bolshoi Theatre in Saint Petersburg in 1852, and was followed by three one-act operas written for the Grand Duchess Elena. But with his lack of success on the Russian opera stage, Rubinstein went abroad once more.

He began a four-year tour of Europe in 1854 at the age of 24, during that tour returned to Bratislava in 1858. He was back in Russia for the founding of the Russian Musical Society in 1859 and the opening of the Saint Petersburg Conservatory in 1862.

During this period, Rubinstein enjoyed his greatest success as a composer, from his Fourth Piano Concerto in 1864 to his opera The Demon in 1871. Other works at this time included the orchestral Don Quixote and the opera Ivan IV Grozniy.

However, Rubinstein resigned from the conservatory and returned to touring Europe. With a commission from Steinway & Sons, the piano company, he toured the US in 1872-1873. Steinway’s contract called for 200 concerts at the rate of $200 a concert, payable in gold, and with all expenses paid. Rubinstein stayed in the US for 239 days, giving 215 concerts – sometimes two and three a day in as many cities.

The US tour secured Rubinstein’s financial security for the rest of his life, and when he returned to Russia he bought a dacha in Peterhof, near Saint Petersburg.

Rubinstein continued to tour as a pianist and a conductor, and returned to Bratislava for the last time in 1885, when he played a concert to raise money for a memorial to the composer Johann Nepomuk Hummel (1778-1837). Hummel was born in Nedbalova Street in Bratislava, and was once a room-mate and friend of Mozart.

Rubinstein returned to the Saint Petersburg Conservatory in 1887, only to resign again in 1891 over Imperial demands for Conservatory admittance policies designed to disadvantage Jews. He left Russia, moved to Dresden and started giving concerts again in Germany and Austria.

He returned to Russia occasionally and gave his final concert in Saint Petersburg on 14 January 1894. He moved back to Peterhof that summer and died there on 20 November (OS 8 November) 1894.

Rubinstein was known for his sarcasm, wit and insight. His student Josef Hofmann (1876-1957) recalled his insistence on absolute fidelity to the printed note. This surprised Hofmann, who had heard his teacher take liberties in his concerts. When he asked Rubinstein to reconcile this paradox, Rubinstein answered, ‘When you are as old as I am, you may do as I do.’ Then he added, ‘If you can.’

When Rubinstein became the director of the Saint Petersburg Conservatory, Tsar Alexander III donated the dilapidated old Bolshoi Theatre as the conservatory’s new home, without funds to restore and restructure the building. When the Tsar asked Rubinstein if he was pleased with the gift, he replied bluntly, ‘Your Imperial Majesty, if I gave you a beautiful cannon, all mounted and embossed, with no ammunition, would you like it?’

The former Troitskaya (Trinity) Street where he lived in Saint Petersburg is now named after him. The Palais Kutscherfeld in Bratislava has housed the French embassy in Bratislava since 1994 and the French Cultural Institute since 1991.

The Museum of Jewish Culture in Bratislava (Photograph: Patrick Comerford, 2019)