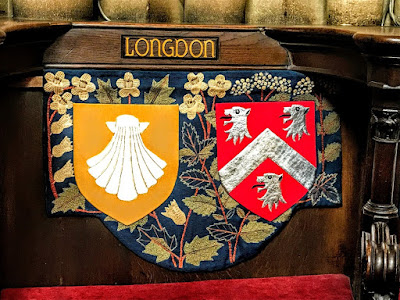 I was musing yesterday morning about a holiday on the Isle of Man in 1965, and later in the day about the connections between the Diocese of Sodor and Man and Irish-born saints or Irish-born and Irish-educated bishops.

The Isle of Man, with 15 parishes and 40 churches, is the only component of the Diocese of Sodor and Man, and while the Isle of Man is not part of the United Kingdom, the diocese is part of the Church of England. But the diocese has a number of links too with both Lichfield and Tamworth through bishops of the past.

Rutter was educated at Westminster School and Christ Church, Oxford (MA). He was nominated as Archdeacon of Man in 1640. At the time, the Stanley family were feudal lords of the Isle of Man, and during the English Civil War, he was a chaplain to the Royalist James Stanley, 7th Earl of Derby, and was at the first siege of Lathom House.

By the end of the Civil War, Rutter was the Prebendary of Longdon in Lichfield Cathedral in 1660. But, through the influence of the widowed Countess of Derby, he was nominated as Bishop of Sodor and Man on 5 October 1661, and he was consecrated on 24 March 1661, the last day of the Restoration year.

It was said he was ‘grave and devout, temperate and dignified, and unfortunately was worn out, though not an old man, when he became a bishop.’ He was so ‘worn out’ that he died in the Isle of Man on 30 May 1662.

Rutter was buried in the chancel of Saint German’s Cathedral in Peel Castle, where his grave was marked with a Latin inscription he wrote himself:

In this house which I have borrowed from my brothers the worms
in the hope of the resurrection to life
lie I SAM by divine grace Bishop of this Island.
Stay reader, behold and laugh at the Bishop’s palace. 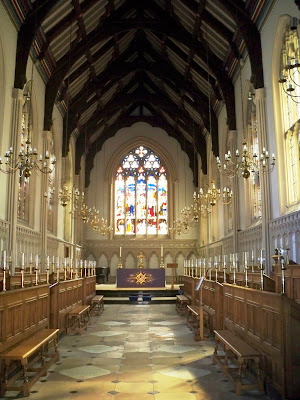 The chapel in Corpus Christi College, Cambridge … James Bowstead was a fellow when he became Bishop of Sodor and Man in 1838 (Photograph: Patrick Comerford)

The story goes that while he was on a break reading in the north of Scotland he fell in love with a minister’s daughter. But he delayed proposing to her until his return the following year. It was too late, for when he returned, she had married. He was so disappointed he never married.

Bowstead was still in academic life when he was nominated Bishop of Sodor and Man by Queen Victoria on 13 July 1838. He was consecrated by Archbishop William Howley of Canterbury on 22 July 1838. Just 18 months later, he became Bishop of Lichfield on 23 January 1840.

He was a Liberal in his politics, signing a petition for abolition of religious tests for admission to universities, but very Protestant in his religious views and strongly opposed the Tractarians. When Bowstead was leaving the Isle of Man, a deputation of three Methodist ministers and three circuit stewards presented him with an address thanking him for his kindly attitude towards the Methodists.

He was a keen horseman and intended to ride from Liverpool to Lichfield. On the way, his horse – possibly suffering from the sea crossing – stumbled and he was thrown, though at the time with no apparent ill effects. Shortly afterwards, it became clear his spine had been injured, and for virtually all his time at Lichfield he was unable to carry out his duties.

Bowstead suffered a long, painful illness, and he was only 42 and still Bishop of Lichfield when he died in Clifton, Bristol, on 11 October 1843. 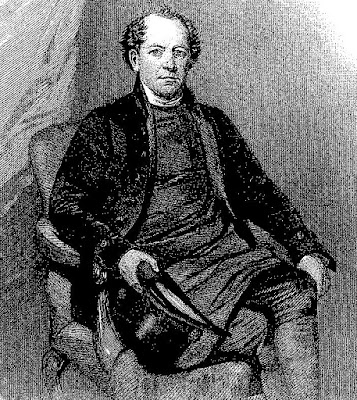 Walter Augustus Shirley (1797-1847), who was the Bishop of Sodor and Man in 1846-1847, was born in Westport, Co Mayo. His paternal grandfather was the controversial Walter Shirley (1726-1786), Rector of Loughrea, Co Galway. But Shirley was often absent from his parish in Co Galway, mainly due to his activities as a revivalist preacher, and he was censured by the Bishop of Clonfert and reprimanded by the Archbishop of Dublin.

His family tree is complicated, the inheritance of Tamworth Castle from the Ferrers family and the use of the Ferrers name in the titles is obscure, and the inheritance of family estates and titles is difficult to follow at times. The family tree is complicated, compounded by the claim that this Lord Ferrers was the father of 27 legitimate children and 51 illegitimate children.

Walter Ferrers was educated at University College, Oxford (BA 1746). In early adult life, he was converted to evangelical principles, perhaps by Henry Venn (1725-1797) of the Clapham Sect. He was ordained deacon by Frederick Cornwallis, Bishop of Lichfield, in 1757, and briefly served as a curate in Ashbourne, Derbyshire. He was strongly linked with the Calvinists within Methodism, although he remained an Anglican.

The Shirley family was rocked by one of the great society scandals of the day in 1760, when his eldest brother, Laurence Shirley (1720-1760), the fourth Earl Ferrers, was hanged at Tyburn for murdering his steward. Ferrers was tried by his peers in Westminster Hall, and despite his plea of insanity he was convicted of murder. He was the last peer of the realm to be hanged as a common criminal. As a concession to his rank, the rope used for his hanging was made of silk. His body was then taken to Surgeon’s Hall for public exhibition and dissection.

Bishop Shirley’s father, also the Revd Walter Shirley, fled Ireland in 1798, but found security when he re-established a link with his first cousin, Robert Shirley (1756-1827), 7th Earl Ferrers and formerly known as Lord Tamworth from 1778 to 1787.

In 1815, through this patronage, Walter Shirley was appointed Rector of Shirley (1815-1827), a Derbyshire parish in the Diocese of Lichfield that was in the gift of the family. Later, Walter was the Rector of Woodford, Northamptonshire, and he succeeded his own son as Rector of Brailsford, Derbyshire (1847-1859).

His only son, Walter Augustus Shirley (1797-1847), was born in Westport, Co Mayo, on 30 May 1797. His father’s cousin, Lord Ferrers, supported younger Walter going to school in Winchester. He went on New College Oxford and was ordained in 1820. He acted as Anglican chaplain in Rome in the winter of 1826-1827, was appointed assistant lecturer (curate) at Ashbourne in 1827. That autumn, when he married Maria Waddington in Paris, his father resigned the living of Shirley in his favour, and he moved there in January 1828.

Shirley alienated many of his evangelical friends with his outspoken support for Catholic Emancipation in 1829. In later years, he lost more friends by refusing to support violent measures against the Tractarians.

His grandson, Walter Shirley (1864-1937), eventually succeeded as the 11th Earl Ferrers in 1912 on the death of his fourth cousin, Sewallis Edward Shirley (1847-1912), 10th Earl Ferrers. The tenth earl, like many of his predecessors, was also known as Viscount Tamworth before inheriting the family titles and estates.

Tamworth Castle once belonged to the Ferrers family … but its inheritance was separate from the Ferrers and Tamworth titles (Photograph: Patrick Comerford)

He was born in Truro, educated at Durham University, and trained for ordination at Clifton Theological College. He was a curate in Bedminster Down, Bristol, and at Liskeard, Cornwall, an army chaplain and Vicar of Meopham in Kent before coming to the Diocese of Lichfield.

He became Bishop of Sodor and Man in 1974. He may be remembered by many people on the island as the bishop who sold Bishopscourt, the episcopal palace, but in 1974 the cost of repairing the roof alone was £60,000. But his crowning glory as bishop was the creation of a cathedral from the parish church of Kirk German, close to the ruins of the former cathedral on Saint Patrick’s Isle. It was consecrated on All Saints’ Day, 1 November 1980. He retired as bishop in 1983. 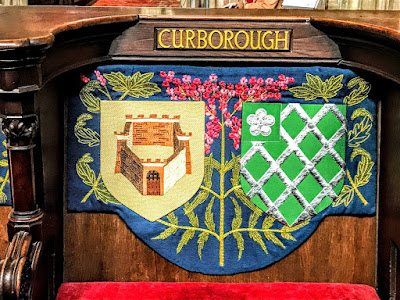 Updated: 09.07.2020, to take account of Bishop Vernon Nicholls, and to change the number in the headline.

Although he was not a Residentiary Canon, Vernon Nichols, Vicar of St Matthews Walsall and Rural Dean, was a Prebend of Lichfield Cathedral (Curburough).

Thank you Stephen: post updated with this addition. Patrick