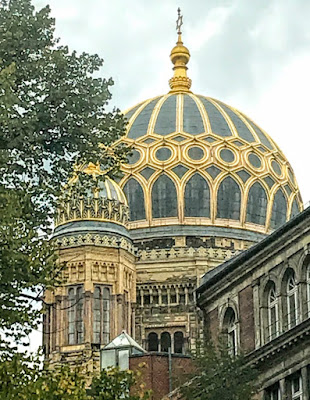 But thinking back on that holiday over the past two days, I recalled hearing stories of internment camps on the island where large numbers of Jews were held during World War I and World War II, and stories even of synagogues inside those camps.

From about 1908, the Jewish Chronicle published regular advertising for Berlin House, an ‘Orthodox Jewish Boarding House,’ at 16 Demesne Road, off Bucks Road, Douglas, It was run by ‘Mrs Rabow & Daughters,’ and offered a ‘liberal table, late dinners, excellent cuisine,’ and ‘terms moderate.’

By 1911, Berlin House was at Palace View Terrace and was run by the Misses Rabow. It was described as a ‘fully-licensed Orthodox Hotel,’ with ‘29 light airy bedrooms,’ a spacious dining-room and comfortable drawing-room, offering ‘table d’hôte.’

By 1914, a Mrs Goldberg was running Vienna House at Fairfield Terrace, Bucks Road, with 20 large bedrooms, and a kosher restaurant with’ excellent cuisine. By then the Rabow sisters’ Berlin House at 3 Palace View Terrace, Central Promenade, was a ‘fully licensed Orthodox hotel,’ with 36 rooms.’ But World War I broke out that summer, and Berlin House became simply ‘Rabows,’ while Mrs Goldberg’s Vienna House became the Continental Hotel.

During World War I, many German and Austro-Hungarian Jews were interned on the Isle of Man under the Aliens Restriction Act as possible ‘Enemy Aliens.’ Across Britain, over 32,000 civilian men were interned for some or all of the war.

After World War, the Jewish Chronicle reported in 1920, that ‘services for the High Festivals were held on the Isle of Man for the first time. They were held at the Continental by the courtesy of Mr and Mrs Goldberg.’

Two years later, the Continental House was being run by Mrs Goldberg at Palace View Terrace, probably having incorporated the Rabow family establishment. It was described as the ‘Oldest established Kasher House in the Island. Charmingly situated, facing sea and Palace, and on Central Promenade.’

The Isle of Man Hebrew Congregation, advertised in 1927 for a single man as shochet, teacher, and to act as reader or chazan (cantor). The post was filled by Mr L Kelman, of Manchester, and services were to be held at the Goldbergs’ Continental Hotel every Friday evening and Saturday morning during the holiday season. ‘All visitors are welcome.’

When the 1928 holiday season began, a Mrs Lyons had opened a third ‘strictly kosher’ guesthouse, the Astoria, at 4 Fort William, Douglas, ‘facing sea and adjoining golf links. Two minutes from boat,’ it boasted, and it even had ‘electric light.’

The Continental and the Astoria continued to advertise in the Jewish Chronicle until a notice on 3 July 1931 said, ‘Mrs Goldberg having disposed of her business in the Isle of Man has opened a private hotel at 108 St Stephen’s Green, Dublin.’ I wondered whether she was related to the Goldberg families in Limerick and Cork, and whether this explained her move to Ireland.

Two years later, the Astoria was also advertised for sale in 1933 by R Lyons who was retiring, and was described as the only Jewish boarding house on the island.

During World War II, between 1,500 and 3,000 German-Jewish civilians were held as internees in camps on the island as ‘enemy aliens.’ Initially, Nazis and Jews from Germany shared internment facilities.

The Jewish Chronicle reported in November 1940: ‘Today the island has what must be the fullest Jewish life in the world. In ordinary camps on a weekday there are more worshippers than in the Great Synagogue, London, on a Sabbath.’

Lectures were delivered on a variety of Jewish topics, and the Jewish community on the island had two kosher boarding houses. By 1941, there were 200 Jewish physicians from London in the Central Camp in Douglas alone. The camps included the Hutchinson Internment Camp in Douglas, known as the ‘artists’ camp’ with its own ‘university’ and newspaper, the Mooragh Internment Camp in Ramsey, whose detainees included Rabbi Werner van der Zyl (1902-1984), former rabbi at the New Synagogue, Berlin (1935-1939) and later founder of Leo Baeck College.

Many detainees in Douglas attended the Central Promenade Camp Synagogue, whose services in English took place in the ballroom of the Lido Dance Hall. Another synagogue was set up in a hut at the Onchan Camp. Women and children internees were mostly housed in the Port Erin and Port St Mary areas, and there was a mixed camp for married couples in Rushen.

One of the most remarkable war-time services took place in the cinema in Port Erin on Rosh Hashanah. Over were 200 people attended, but there was no minyan – almost all the worshippers were women internees who had been separated from their husbands, fathers, brothers and sons.

Eventually, the Jewish prisoners were released and some men given the option of joining the British armed forces, but thousands more were sent to camps in Canada and Australia. There was an unusually high proportion of Jewish and anti-Nazi internees in Hutchinson Camp, which closed in March 1944.

A leading member of the community today, Leonard Singer (77), Deputy Speaker of the House of Keys in the Tynwald since 2012. A retired pharmacist, he was born in Manchester and lived in Portugal and Tenerife before moving to the Isle of Man in 1989.

The Jewish Chronicle reported in 2016 there are about 200 Jews on the island, but most are not religious and are intermarried. This small community has no synagogue or a rabbi, nor is there a place to buy kosher food. The community has organised a Holocaust Memorial Day service since 2001, conducted in English, Hebrew and Manx. 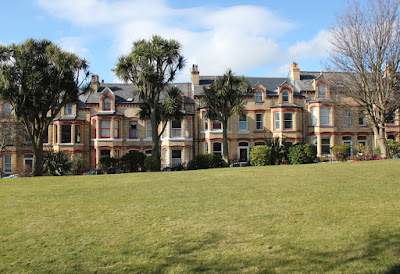