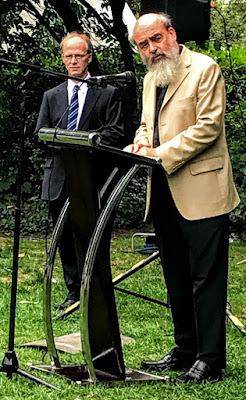 We are here this afternoon to remember the 75th anniversary of the atomic bombing of Hiroshima on 6 August 1945.

These are our worst nightmares. As we fall further and further into the pit, into the abyss, we see too a rise in racism, anti-Semitism and far-right populism, with Donald Trump and Boris Johnson in the vanguard, leaving us unable to cope as the Covid-19 pandemic sweeps across the globe.

Too much money is being spent on the arms race and hatred, not enough on hospitals, health, housing and hospitality for those who need our welcome.

If we stopped spending on nuclear weapons for even a month, a week, a day, the world would have enough money to cope with the consequences of the Coronavirus pandemic.

Instead, humanity is frightened, fearful and fretful, unsure where to lay the blame for our chaos, living through a nightmare, wondering whether the planet is out of control. And as it spins, who feels like asking, ‘Stop, let me get off!’

But instead of walking away, instead of hiding from the potential horror we face, we must act, and we must find glimpses of hope.

I was involved in planting this cherry tree on this day 40 years ago, 6 August 1980. Like the cherry tree at ground zero in Hiroshima, it continues to blossom each year as a sign of hope, hope that life continues in the face of gross enormity.

Today, on this anniversary, I am pleased to hear, the Irish Government is formally ratifying the Treaty on the Prohibition of Nuclear Weapons (TPNW), or the Nuclear Weapon Ban Treaty.

This is the first legally binding international agreement to comprehensively prohibit nuclear weapons, with the hope of leading to their total elimination.

It was passed on 7 July 2017, and to come into effect, its needs signature and ratification by at least 50 countries. For the nations who are party to it, the treaty prohibits developing, testing, producing, stockpiling, stationing, transferring, using and threatening to use nuclear weapons, or even assisting and encouraging those activities.

For nuclear armed states joining the treaty, it provides a time-bound framework for negotiations leading to the verified and irreversible elimination of nuclear weapons programmes.

This treaty has been described as an ‘unambiguous political commitment’ to achieve and maintain a nuclear-weapon-free world.

This is no small step, no small achievement, and we should be proud that Ireland is providing moral and political leadership, providing hope in a world feeling forlorn 75 years after Hiroshima and Nagasaki.

(Revd Canon Professor) Patrick Comerford is President of the Irish Campaign for Nuclear Disarmament (Irish CND). He was speaking at the annual Hiroshima Day commemoration organised by Irish CND at the Hiroshima Cherry Tree in Merrion Square on 6 August 2020.