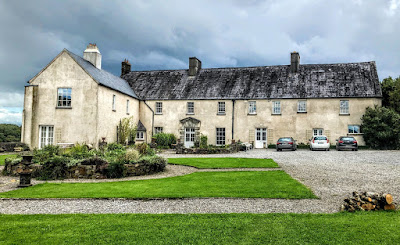 Dromana House, near Cappoquin, Co Waterford … home of the FitzGerald family and their descendants for over 800 years and almost 30 generations(Photograph: Patrick Comerford, 2020)

After visiting the exotic gate lodge and bridge at Dromana, we promised to return the next day, as part of this summer ‘Road Trip,’ to Dromona House, set in beautiful rolling pastures and dense woods, with glimpses of the Blackwater.

Dromana House was once home of the Fitzgeralds and through them it passed to the Villiers-Stuart family. Close-by is Villierstown, an 18th century planned estate village, built to house linen weavers brought from Ulster to work on locally grown flax.

The mediaeval castle of Dromana stood on a spectacular site, high above the River Blackwater. It is remarkable that one family, despite all the changes of names, has remained at Dromana House for more than 800 years. Dromana House and its predecessors have stood on this site since 1215.

From the 13th century, this was a seat of the FitzGerald family. Over eight centuries and 26 generations, it has been a castle, a fortified house, a Jacobean manor and a Georgian mansion. As Barbara Grubb points out, Dromana was three times inherited through a female line and three heiresses.

The counties of Waterford and Desmond were granted to Thomas FitzAnthony, Seneschal of Leinster in 1215. The first Earl of Desmond was created from this line in 1329, and it was Gerald FutzGerald, younger son of the sixth earl, inherited the territory of the Decies in 1462.

One of the most notable figures associated with Dromana was Katherine, Dowager Countess of Desmond. Born a daughter of the house, she personally petitioned Elizabeth I for the restoration of the family land and income. It is said that during her long life, she had grown three natural sets of teeth and that she died at the age of 140 after falling from a cherry tree in Dromana 1604. 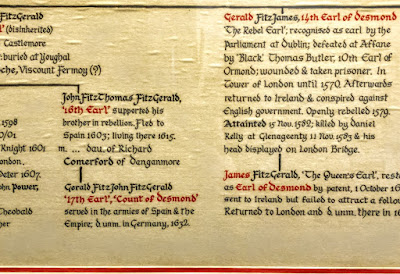 In the renovated History Room, Barbara Grubb shows three family trees that illustrate how Dromana descended as the branches of the family grew new shoots. In the corner of one chart, I could pick out the Comerford family connection: James FitzThomas FitzGerald, who claimed the title of 16th Earl of Desmond, fled to Spain and in 1615 married a daughter of Richard Comerford of Dangenmore.

Their son, Gerald FitzJohn FitzGerald, 17th Earl of Desmond, was also known as the ‘Conde de Desmond,’ and died in Germany in 1632.

The castle of Dromana was attacked and damaged in the wars of the 1640s and 1650s, although its base can still be identified from the river and is still part of the house.

In the 1670s, the heiress of Dromana, Katherine FitzGerald, who had been a ward of King Charles II, married Colonel Edward Villiers, son of Lord Grandison. Lady Barbara Villiers, whose portrait hangs in Dromana, was Duchess of Cleveland and mistress of Charles II.

Around 1700, instead of rebuilding the castle, two new ranges were built at right angles to one another along the courtyard walls. Both were simple gable-ended two storey structures. Their only decoration was a robust, pedimented block-and-start door case in the style of James Gibbs.

Work on a larger new house began around 1780, directly in front of the longer 1700s range. The principal façade was of two storeys and nine bays, with a parapet and a segmental-headed armorial doorcase. The river façade contained a shallow double-height bow and was an extension of the smaller 1700s range. Together the three buildings faithfully followed the line of the original FitzGerald bawn or courtyard. 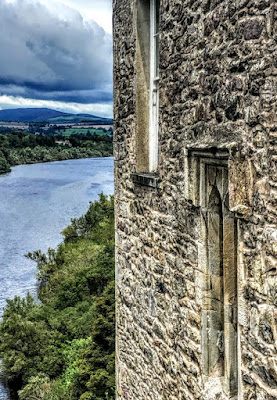 Part of the original FitzGerald Castle above the Blackwater is incorporated into Dromana House (Photograph: Patrick Comerford, 2020)

John Villiers, 1st Earl Grandison, responded to a famine in 1739 by planting of more than 60,000 trees, introducing the linen industry to the area, and laying out the planned town of Villierstown.

Meanwhile, at Dromana, the descendants of the family had succeeded as Earls Grandison until 1800, when the only child of the second earl, Lady Gertrude Amelia Villiers, married Lord Henry Stuart (1777-1809), younger son of the 3rd Marquess of Bute, and so the family name became Villiers-Stuart.

Their son, Henry Villiers-Stuart, was a young candidate in the 1826 election when he defeated Lord George Beresford from Curraghmore and the Waterford establishment, giving Daniel O’Connell and the Catholic Emancipation movement their first MP.

Daniel O’Connell was welcomed at Dromana during that election campaign. In letters to his wife Mary, he wrote, ‘Here I am at this lovely spot’ and ‘I cannot tell you what a sweet spot this is.’

The ornate ‘Hindu-Gothic’ gate lodge at Dromana was built in the style of the Brighton Pavilion to welcome home Henry Villiers-Stuart and his Austrian-born bride Theresia Pauline Ott. Henry lost his seat at the election in 1830, but in 1839 he was given the title of Lord Stuart de Decies, recalling his ancestors’ long, unbroken link with this part of West Waterford.

Lord Stuart had the interior of Dromana refitted elaborately in the 1840s, with a suite of reception rooms and an imperial staircase.

His only son, Henry Windsor Villiers-Stuart (1827-1895), had been ordained, but resigned from clerical life when his father died so that he could inherit the property and take up a political career. However, the legitimacy of his parents’ marriage was challenged, and he was unable to inherit his father’s title.

Henry was MP for Co Waterford in 1873-1874 and 1880-1885 and High Sheriff in 1889. A traveller and explorer, he explored the tombs of Egypt and the Amazon Basin and wrote Nile Gleanings, Egypt After the War. He drowned when he fell overboard from his yacht in the River Blackwater on 12 October 1895.

His son, Major Henry Charles Windsor Villiers-Stuart (1867-1908), was severely wounded in the Boer War, and later died of his wounds. His widow, Grace Frances (Newman), gave a substantial donation that allowed Cappoquin Rowing Club to build the boathouse on the banks of the River Blackwater. She opened the new boathouse on a gala day in Cappoquin in 1910, when she was presented with a gold key.

Ion Henry FitzGerald Villiers-Stuart (1900-1948) was the club captain for many years and one of the club boats, The Elspeth, was named in honour of his wife Elspeth (Richardson). She died accidentally death when she fell from her bicycle in Cappoquin.

James Henry Ion Villiers-Stuart (1928-2004) and his wife Emily left Dromana after most of the estate was acquired by the Irish Land Commission in 1957. The house and its acreage of woodland and garden had been left in the care of a relative, who regarded Dromana as a white elephant. The house was difficult to heat and was without electricity, and this cousin demolished the 1780s block and reduced it to more manageable proportions.

That demolition was a sad day for Dromana. But it also revealed the 17th-century manor, incorporating the base of the medieval tower. Happily, James Villiers-Stuart was able to buy back the house, and he and his wife Emily returned to Dromana.

The house is now the home of his daughter, Barbara Grubb, and her family. Since 1995, Barbara and her husband Nicholas Grubb have worked tirelessly at developing and restoring the house and grounds. 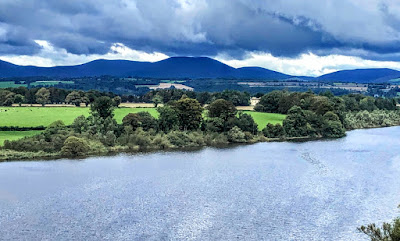 From the window, Barbara Grubb showed us the River Blackwater, broad and tranquil under the cliff on which the first castle was built. In the distance we could see the cathedrals of Lismore and Lismore Castle to the west, and the tower of Tourin House at the northern brink, below the slopes of the Knockmealdown Mountains.

The steeply sloping riverbanks are covered with oak woods and the mid-18th century garden, with its follies, the Rock House and the Bastion, is being restored.

Along the shoreline, the tunnels of the grass-roofed bastion provided a boat-house and a dock for river traffic, while the banqueting house survives as a folly from 1751.

As we left Dromana, and continued on the next stage of this summer ‘Road Trip’ from Cappoquin on through Dungarvan, I recalled how the British poet laureate Sir John Betjeman, once had had a long if oft-hidden association with the Villiers-Stuart family. His poem, ‘The Irish Unionist’s Farewell to Greta Hellstrom in 1922,’ opens with the lines:

Golden haired and golden hearted
I would ever have you be,
As you were when last we parted
Smiling slow and sad to me.

The poem is set in West Waterford, with each stanza closing with the line ‘Dungarvan in the rain.’ The woman in the poem has since been identified by Barbara Grubb as her grandmother Elspeth, who later married Ion Villiers-Stuarts in 1928. She and John Betjeman met in the Yellow House in Helvick Head, a fishing lodge then owned by the Villiers-Stuart family, and he visited her both in Galway and in Co Waterford.

Her identity was revealed in 2007 by Barbara Grubb when she opened an exhibition at Joan Clancy’s Gallery in Dungarvan. She told Catherine Foley of The Irish Times that Betjeman ‘was stunned by my grandmother’s extraordinary beauty, but though he worshipped her, it was only from afar, for she was in fact in love with my grandfather, Ion Villiers-Stuart, whom she married. They did, however, remain good friends right up to the end of his life.’

The final lines of the poem show the poet’s respect and his final acceptance of Elspeth’s decision to remain friends and never to be lovers:

You were right to keep us parted:
Bound and parted we remain,
Aching, if unbroken hearted—
Oh! Dungarvan in the rain. 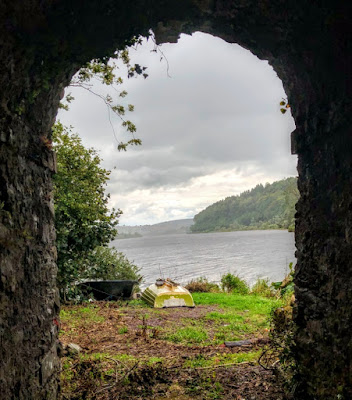 The Blackwater seen from the bastion in the rain (Photograph: Patrick Comerford, 2020)

‘The Irish Unionist’s Farewell to Greta Hellstrom in 1922,’ by John Betjeman

Golden haired and golden hearted
I would ever have you be,
As you were when last we parted
Smiling slow and sad at me.
Oh! the fighting down of passion! br /> Oh! the century-seeming pain —
Parting in this off-hand fashion
In Dungarvan in the rain.

Slanting eyes of blue, unweeping
Stands my Swedish beauty where
Gusts of Irish rain are sweeping
Round the statue in the square;
Corner boys against the walling
Watch us furtively in vain,
And the Angelus is calling
Through Dungarvan in the rain.

Gales along the Comeragh Mountains,
Beating sleet on creaking signs,
Iron gutters turned to fountains,
And the windscreen laced with lines,
And the evening getting later,
And the ache —  increased again,
As the distance grows the greater
From Dungarvan in the rain.

There is no one now to wonder
What eccentric sits in state
While the beech trees rock and thunder
Round his gate-lodge and his gate.
Gone —  the ornamental plaster,
Gone —  the overgrown demesne
And the car goes fast, and faster,
From Dungarvan in the rain.

Had I kissed and drawn you to me
Had you yielded warm for cold,
What a power had pounded through me
As I stroked your streaming gold!
You were right to keep us parted:
Bound and parted we remain,
Aching, if unbroken hearted —
Oh! Dungarvan in the rain! 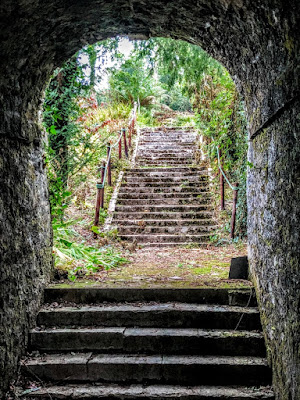 The tunnels of the bastion provided a boat-house and a dock for river traffic (Photograph: Patrick Comerford, 2020)