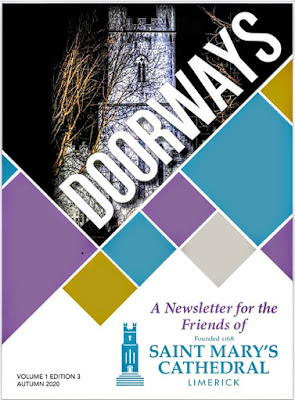 The following tribute to Archdeacon Wayne Carney has been published this week in the current (Autumn 2020) edition of Doorways (Volume 1, No 3), the newsletter of the Friends of Saint Mary’s Cathedral, Limerick (p 6):

His many roles in the Diocese of Limerick and Killaloe included those of president of the United Diocesan Youth Council, Warden of Lay Readers, and Diocesan Director of Ordinands. He was a keen supporter of the Anglican mission agency USPG (United Society Partners in the Gospel). Wayne was a supportive and an active participant in the monthly seminars and training days I organised for clergy and readers in the diocese.