‘So open, we pray, your goodly
treasury of rain, to revive all’ 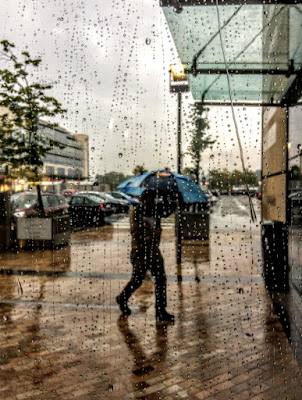 Tonight in the Jewish Calendar (9 October 2020) is the beginning of Shemini Atzeret, a holiday that follows the seven joyful days of Sukkot.

Shemini Atzeret is followed by Simchat Torah, a day of joy that begins tomorrow evening and that marks the beginning of the annual Torah reading cycle. Simchat Torah is celebrated with dancing, traditionally following seven circuits known as hakafot, as the Torah scrolls are held aloft. Both days are celebrated with nightly candle lighting and with festive meals at both night and day.

Shemini Atzeret (שְׁמִינִי עֲצֶרֶת‎) – the ‘Eighth day of Assembly – directly follows the Jewish festival of Sukkot, which is celebrated for seven days, and so Shemini Atzeret is literally the eighth day, considered to be part of Sukkot but also a separate festival in its own right.

The Book of Numbers explains Shemini Atzeret simply: ‘On the eighth day you shall have a solemn assembly; you shall not work at your occupations’ (Numbers 29: 35, NRSVA).

Rushing to interpret the meaning of this strange and loosely-defined holiday, the rabbis never lacked for creative explanations. Some rabbis, for example, argued that as Sukkot is a time to commemorate dwelling in temporary structures as guests of the Lord, Shemini Atzeret is a bonus round of sorts, a reminder that God loves his chosen people so much he is reluctant to let them go back to business as usual.

Other scholars argued that while Sukkot is a universal holiday, in which Jews are commanded to invite guests into their homes, Shemini Atzeret is just for Jews, a time for God to bond with his favourite children.

It is traditional on Shemini Atzeret to recite Tefilat Geshem, a special prayer for rain that marks the beginning of the rainy season after the harvest. This prayer is recited regularly until Passover.

On Shemini Atzeret, Sephardic Jews traditionally recite a prayer for rain that runs to several paragraphs.

The first prayer, Shifat revivim (‘O Lord, pour down copious showers from your heavens’), is ascribed to Solomon ibn Gabirol, the 11th century Andalusian poet and philosopher who was born in Málaga. The author’s first name, Shelomoh, is signed in the form of an acrostic at the beginning of the first lines in the poem and is followed by the wish HaZaK (‘Be strong!’).

The prayer that follows is Mechaseh shamayim (‘O you who covers the heavens’). Its author is unknown. The sentence, ‘So open, we pray, your goodly treasury of rain, to revive all in whom a soul is breathed, as you make the wind to blow and the rain to fall,’ is repeated as a refrain five times.

These prayers continue with Yisbe’un yedidckha (‘Give to your beloved children plentifulness’), which includes the poem Ayl chai yiftach otzrot shamayim (‘God of life, open your heavenly treasures’). Written in an alphabetical acrostic form in which biblical phrases are used, the phrase ‘May the wind blow and the rain flow’ appears as a refrain.

The text in the London, Amsterdam, and Spanish-Portuguese Mahzorim or holiday prayerbooks omits the stanzas beginning with the letters vav (Vetazil mitral) and zayin (Zekhor rahamecha). It seems, however, these two stanzas were in older prayer books, as each stanza makes reference to one of the biblical heroes in whose merit rain is requested. It is unthinkable that the poet left out Aaron and David, as intimated in these two stanzas.

Then follows the acrostic poem Begishmay orah (‘Grant to the earth sunlight and blessing even as rain’). The congregation answers ‘Amen’ after each phrase ending with the word adama (earth, land).

Anti-semitism is on the rise across Europe and in North America. The Swedish Defence Research Agency has published a report on the prevalence of antisemitic stereotypes in social media, with unsettling results. In the past week, during the High Holiday period, Jewish communities have been especially targeted in antisemitic incidents.

This evening is also the anniversary of an attack last year (9 October 2019) by an armed far-right extremist on the synagogue in Halle, Germany. It was Yom Kippur, members of the Jewish community were praying inside, and the attacker killed two people outside, Jana Lange and Kevin Schwarze.

For my Friday evening reflections on this special Friday evening, I came across this poem for Shemini Atzeret by Devon Spier, which seems so appropriate as ‘we descend greater into the fields of our unknowing’ in ‘the uncertain future of the world’s in-between’:

Shemini Atzeret: A Poem for Life In-Between By Devon Spier

There is a place where the vines wither and
the earth’s lushness suddenly begins to fade.
In this place the ground cries out to us.
Not with blood, no.
But with ageless liminality.
What went before cannot remain.
And what will be is still unwritten.

Let our bodies linger.
As our pasts fall behind.
And our souls seek comfort.
As we descend greater into the fields of our unknowing.

Though there are no fruits in the fallowness here
There is still space to move and time to seed.
In the uncertain future of the world’s in-between. 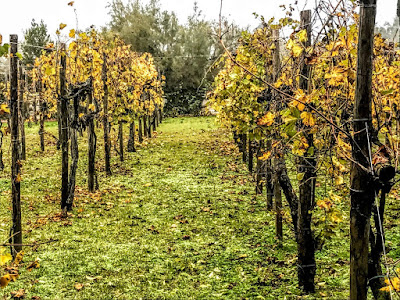 ‘There is a place where the vines wither and the earth’s lushness suddenly begins to fade’ (Photograph: Patrick Comerford)