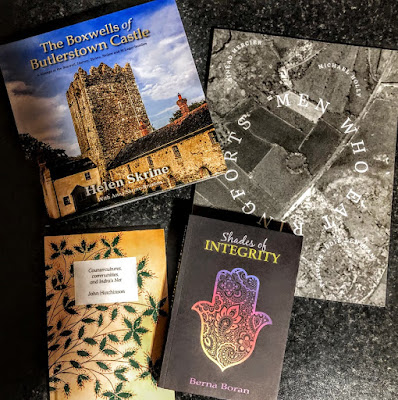 There are many things I miss during this pandemic lockdown: there are missed opportunities for travel to my favourite places, walks on the beach, eating out, time sipping a double espresso in cafés … And I sorely miss opportunities to browse in some of my favourite bookshops.

Over the last few months, I have bought a number of books online. But that is no substitute for losing count of time as I browse the shelves of a good bookshop, serendipitously coming across a book I never knew about but realise I always wanted to read.

Serendipity continued to manifest itself this week when four books arrived in the post unexpectedly, two from my old friend Michael Freeman in Rosslare, Co Wexford, and two from Michele Horrigan of Askeaton Contemporary Arts.

But the Boxwells are one among the families that for hundreds of years have owned castles in Co Wexford and have influenced social, political, economic and cultural change across the world.

There are intriguing connections with the Elgee family and Oscar Wilde; with Whitley Stokes and William Stokes, pioneers in medicine; with Percy French; and through her mother with the St Leger family of Doneraile. And there is the story a ‘visit’ to Bargy Castle by the IRA during a Christmas party at the height of the Irish Civil War.

Helen Skrine is due to feature soon on RTÉ’s programme Nationwide.

Berna Borna, originally from Castlecomer, Co Kilkenny, was a teacher at the Muslim National School in Clonskeagh almost 25 years, and was the school principal for the last five of those years. Her novel Shades of Integrity is her debut fiction and is published under Michael Freeman’s imprint of Three Sisters Press in Rosslare.

Her novel about a Muslim family from Egypt living in Dublin is due to be launched early next year. She says, ‘Coming into contact with the Muslim community has been a great privilege and blessing. The experience was enriching beyond the ordinary. The community comprises people from many differing countries and cultures. We have much to learn from each other.’

It is an appropriate corrective to negative images of Muslims and Islam created by this week’s horrific killings in Nice.

The book is prefaced with a quotation from Khalil Gibran:

Your children are not your children.
They are the sons and daughters of Life’s longing for itself.
They come through you but not from you,
And though they are with you yet they belong not to you.
You may give them your love but not your thoughts,
For they have their own thoughts.

Michele Horrigan from Askeaton, Co Limerick, is Director and Curator at Askeaton Contemporary Arts, and a former curator at the Belltable in Limerick.

Men Who Eat Ringforts is printed with fluorescent Pantone inks, substituting the standard cyan, magenta and yellow process colours, resulting in a luminous effect to images throughout.

This new book was co-published in August with Gaining Ground, a public art programme based in Co Clare.

Meanwhile, Askeaton Contemporary Arts are in the post-production stage, getting ready to launch its own YouTube channel. They promise something to watch during lockdown.