A return visit to Cahermoyle,
a Venetian-style palazzo by
McCarthy inspired by Ruskin 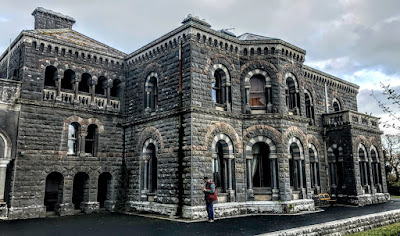 Cahermoyle House near Ardagh, Co Limerick … once the home of the family of William Smith O’Brien (Photograph: Patrick Comerford, 2020)

While I was still finding my way around the Rathkeale and Kilnaughtin Group of parishes in early 2017, exploring the towns and villages, visiting graveyards and disused churches, one of the first historic houses I visited was Cahermoyle House, halfway between Rathkeale and Newcastle West, just outside the village of Ardagh.

I returned to Cahermoyle yesterday [10 November 2020] at the invitation of a group of walkers from Saint Kieran’s Heritage Association in Ardagh.

Ardagh has given its name to the Ardagh Chalice and the Ardagh Hoard which were found near there in 1868. Rathronan Church was the parish church of the O’Brien family who once lived at Cahermoyle House, but the house is also important as one of the great works by the architect James Joseph McCarthy (1817-1882), who inherited the mantle of AWN Pugin in the Gothic revival in Ireland. 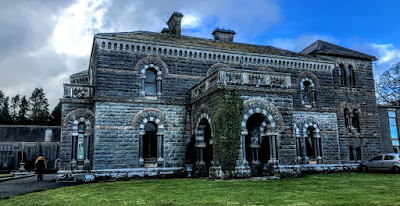 Cahermoyle House is one of the few works of domestic architecture by JJ McCarthy (Photograph: Patrick Comerford, 2020)

JJ McCarthy was born in Dublin on 6 January 1817, and is said to have been apprenticed at an early age to William Farrell, and may have worked in England for Charles Hansom (1817-1888).

McCarthy supervised Pugin’s Fitzpatrick mortuary chapel in Clough, Co Laois, and when Pugin died in 1852 he took over the completion of many of his unfinished works in Ireland, including his cathedrals in Killarney and Enniscorthy, his church for Anthony Cliffe in Bellevue, Co Wexford, and his work at Saint Patrick’s College, Maynooth. He also took over Richard Pierce’s work on the ‘Twin Churches’ in Wexford after Pierce died in 1854.

McCarthy’s monumental works include his cathedrals in Armagh, Cobh, Derry, Ennis, Monaghan and Thurles. His works in the Limerick area include Saint Saviour’s Dominican Church in Baker’s Place, Limerick, and the Roman Catholic parish churches in Ballingarry, Foynes, Kilmallock and Rathkeale.

But Croom House and Cahermoyle House are probably his only two private houses in Co Limerick. Cahermoyle House was designed in what has been described as the ‘North Italian style’ for Edward W O’Brien, son and heir of the patriot and politician William Smith O’Brien (1803-1864). 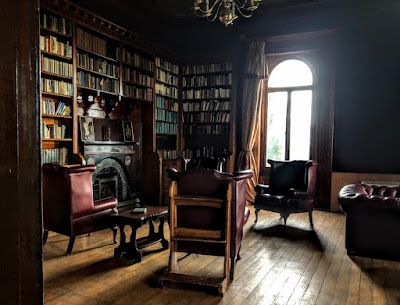 Cahermoyle means ‘the stone fort of the soft ground.’ About one-third of the circular stone wall of the Caher, probably dating back 2,000 years, still survives 100 metres west of the house. Cahermoyle became the property of the Anglo-Norman FitzGeralds shortly after the arrival of the Anglo-Normans at the end of the 12th century.

After the Desmond rebellion and forfeitures in 1583, Cahermoyle escaped because it was part of the dowry of the daughter of the rebel Earl of Desmond, Lady Catherine FitzGerald, who had married Sir Daniel O’Brien of Carrigaholt, Co Clare.

John Bourke, a wealthy merchant who rented Cahermoyle, was MP for Askeaton in the Parliament of James II. He died there in 1702 and is buried in the Bourke vault in Ardagh.

Sir Edward O’Brien, 4th Baronet, of Dromoland Castle, Co Clare, married Charlotte Smith, the heir to Cahermoyle, in 1799, and eventually Cahermoyle was inherited by her younger son, William Smith O’Brien. His elder brother, Sir Lucius O’Brien (1800-1872), would succeed as 13th Lord Inchiquin in 1855, while his sister, Mother Harriet Monsell, was a leading figure in the revival of women’s religious communities in the Anglican tradition. 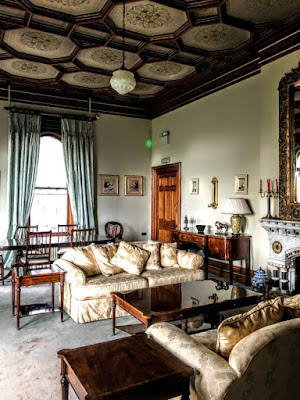 Inside Cahermoyle House, home of the O’Brien family until the 1920s (Photograph: Patrick Comerford, 2020)

However, after a radical shift in politics, O’Brien became a leading figure in the Young Ireland revolution in 1848. When he was defeated at the Battle of Ballingarry, Co Tipperary, he was arrested, convicted of treason, and sentenced to be hung, drawn and quartered. When his was sentence commuted to penal servitude for life, he was exiled to Tasmania.

O’Brien was pardoned in 1856, the year his mother died. After some years in Paris, he returned to Cahermoyle. He had expected to regain the house and lands, which he placed in trust for his wife and their eldest son, Edward O’Brien, before the Battle of Ballingarry. However, Edward did not support his father’s nationalist commitments and William never regained Cahermoyle. He lived there until his wife’s death and then moved to Bangor in Wales, where he died in 1864.

His body was brought back to Ireland on the mail boat. From the North Wall in Dublin, he was brought along the quays to Kingsbridge, by train to Limerick, and to Cahermoyle by hearse drawn by four white horses. On the following day, 12 Church of Ireland and 24 Roman Catholic priests led the cortege to Rathronan cemetery where he was buried. At one point, contemporary reports said, the cortege stretched two miles all the way from Rathronan back to Cahermoyle.

In the 1870s, Edward O’Brien’s estate amounted to 4,990 acres. In the early 1871, he commissioned McCarthy to design a new house, replacing the earlier house that had been inherited through his grandmother, the Dowager Lady O’Brien. 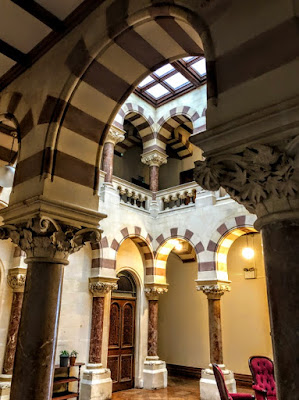 McCarthy designed Cahermoyle House in the style a Venetian palazzo, with the influences of Venetian, Tuscan, Lombardic Romanesque and Gothic styles, popularised in these islands by John Ruskin, author of The Stones of Venice. One local historian has written that the house would look more in place by a canal in Venice than in its remote rural setting in West Limerick.

The emerging Irish Revival is significantly highlighted in the use of Irish limestone and indigenous craftsmanship. The house combines rusticated and domesticated limestone and sandstone, with carved limestone decorative features, ballustrades, window frames, quoins and dressed limestone eaves.

A strong element of technical skill can be seen in the rough-hewn masonry, and there is a clear decorative emphasis in the structural polycromy. Features such as balustrades, arches and columns are carried from outside to the interior of the house, adding to its grandeur. 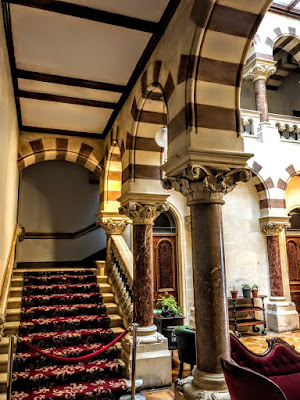 Cahermoyle House is a detached, four-bay, two-storey former country house, dated 1871, and completed in 1875. It has a square-plan single-bay, single-storey, flat-roofed porch to the east or front elevation.

There is a single-bay, three-storey block to the north elevation, with a full-height canted bay window and a single-bay single-storey projecting bay with a cut limestone balustrade to the top of the south elevation.

The house has a multiple-bay, two-storey block to the rear or west elevation, with a single-storey projecting arcade having a cut limestone balustrade to the south elevation. 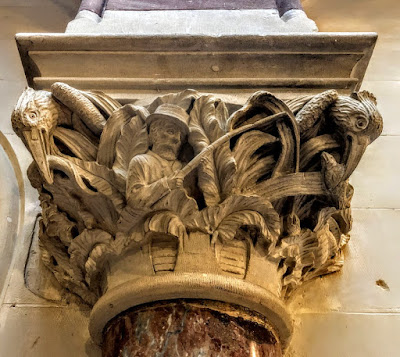 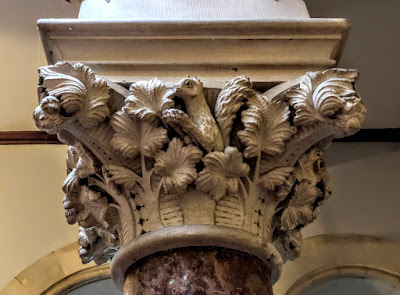 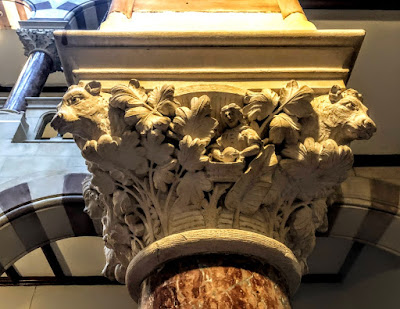 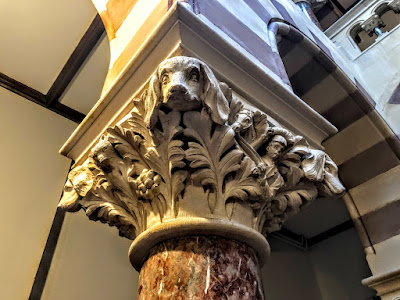 Milking maids, anglers with fish and hunting scenes with horses and hounds decorate the column capitals in the lobby at Cahermoyle House (Photographs: Patrick Comerford, 2020)

The entrance to the house is through the east elevation. Inside, there is a double-height lobby, with a central square with an atrium reaching from the ground floor and first floors, divided from the lobby by rendered arcades with column capitals, depicting different scenes, including cows and milkmaids, hunting dogs and boars, anglers with fish and squirrels hoarding nuts.

The rendered balustrade incorporates marble columns to the first floor. The staircase begins at the west end and is incorporated into a section of the arcade.

There are modern extensions at the north side, and a chapel built in the 20th century by the Oblate order. At the entrance gates, there is an inscribed limestone plinth to a pier with a bronze moulding of William Smith O’Brien. The inscription reads:

Cahermoyle, home of William Smith O’Brien MP 1803-1864. Leader of the Young Ireland rising 1848. ‘That dear old brown house with its ivied keep haunted by ghosts and grim and dismal tales’.

Cahermoyle House was sold by the O’Brien family in 1919, and it was bought in 1922 by the Oblate Order. It became a novitiate, and the Oblates later added an extra 20 rooms to the house, a refectory and community rooms, and a chapel, and they ran a model farm. 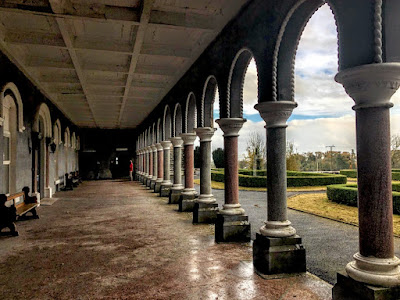 McCarthy’s loggia leads from the house to the later chapel at Cahermoyle House (Photograph: Patrick Comerford, 2020)

During my visit to Cahermoyle at the weekend, I was not able to visit the cruciform-plan one-and-half storey chapel at the south side. This chapel has a five-bay nave, single-bay chancel, and square-profile single-storey transepts to the east and west elevations.

As many as 30 Oblate students were there in the 1950s. However, falling vocations farced the Oblates to sell Cahermoyle and the surrounding lands. The farm was sold in separate lots and Cahermoyle House, and was a nursing home until it was sold to private buyers in recent years.

The O’Briens of Cahermoyle House worshipped in nearby Rathronan Church, and William Smith O’Brien is buried in the churchyard. His sister, Mother Harriet Monsell (1811-1883), was the founder of the Community of Saint John Baptist, the ‘Clewer Sisters’

A younger son of William Smith O’Brien was the Very Revd Lucius Henry O’Brien (1842-1913), Dean of Saint Mary’s Cathedral, Limerick (1905-1913), who is commemorated in the cathedral in a pair of stained-glass windows by Catherine O’Brien. 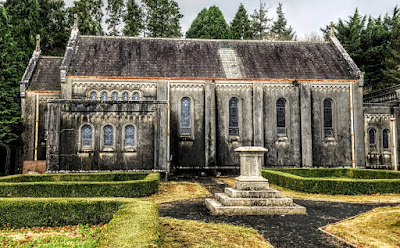