‘The fast-gaining waves …
beat, like passing bells,
against the Stones of Venice’ 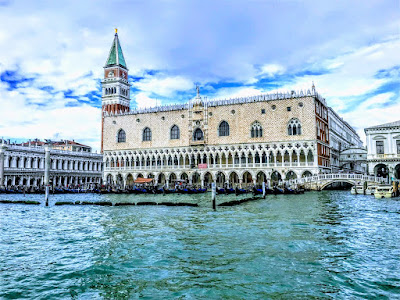 John Ruskin said ‘The Ducal palace of Venice … is the central building of the world’ (Photograph: Patrick Comerford, 2018)

It is impossible to pass the Doge’s Palace at the waterfront in Saint Mark’s Square in Venice without recalling how John Ruskin once said: ‘The Ducal palace of Venice contains the three elements in exactly equal proportions – the Roman, Lombard, and Arab. It is the central building of the world.’

Two of the greatest writers about Venice in the English-speaking world must be John Julius Norwich, who died earlier this year [1 June 2018], and John Ruskin (1819-1900), whose bicentenary is being marked next year.

I met John Julius Norwich at the Wexford Festival two years ago, just a few weeks after I had acquired for the first tome a copy of John Ruskin’s The Stones of Venice.

I had often borrowed library copies and read other people’s versions of Ruskin’s Stones of Venice, but only acquired my own copy in a second-hand bookshop in Cambridge in September 2016, a slim edition edited by JG Links, author of Venice for Pleasure and published in 2001 in London by Pallas Athene.

Ruskin’s work was so influential that it brought Victorian Gothic architecture to a new stage beyond AWN Pugin. The Stones of Venice was originally a three-volume work on Venetian art and architecture, published in 1851-1853. Had I studied architecture rather than theology, this would have been on the essential reading list.

Ruskin had an intense bond with Venice and described himself as her ‘foster-child.’ This bond began with his first visit at the age of 16, and was nourished over the span of his lifetime, with 11 visits between 1835 and 1888. He wrote in 1851, ‘Thank God I am here, it is a Paradise of Cities.’

Ruskin succeeded in influencing the aesthetics of his time with his interpretation of art and architecture and contributed to spreading the myth of Venice, extolling its beauty right in the period of its decline.

The Stones of Venice was published in three volumes between 1851 and 1853, and was revised after he had witnessed the demolition of important parts of Saint Mark’s Basilica. It was a hymn to the beauty and extreme fragility of Venice, and became a guide to the city ‘for the few travellers who still care about its monuments.’

Ruskin was Victorian England’s greatest writer on art, literature and architecture. He first described architecture as poetry in 1839, and later wrote: ‘To see clearly is poetry, prophecy, and religion, ― all in one.’ Later, Ruskin would describe the Church of Saint Augustine and Saint John the Baptist or John’s Lane Church in Thomas Street, Dublin, designed by Edward Welby Pugin, as ‘a poem in stone.’ 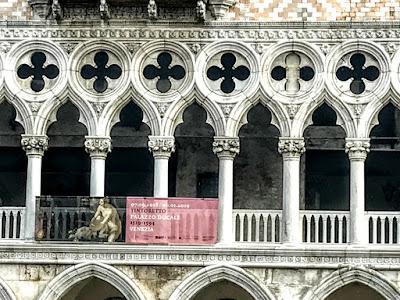 The Doge’s Palace is the one building more than any other in Venice that inspired Ruskin (Photograph: Patrick Comerford, 2018)

The Doge’s Palace is the one building more than any other in Venice that inspired Ruskin. He explored this building in depth from different angles in his sketchbooks, watercolours, architectural studies, plaster casts, albumen and platinum prints.

Ruskin’s famous essay, ‘The Nature of Gothic,’ strongly influenced the Gothic revival in architecture in Britain, Ireland and elsewhere from the mid-19th century on.

His passionate exposition of the Gothic, which he saw as perfected in Venice, was linked to his commitment to socialism and to his love of literature. But it is fair to ask what the myth of Venice would be in the minds of most western Europeans without John Ruskin, who recorded the city’s during its decline, examining and describing the city in the most minute detail, offering a paean to its beauty, uniqueness and fragility.

Venice ‘is still left for our beholding in the final period of her decline: a ghost upon the sands of the sea, so weak – so quiet, -- so bereft of all but her loveliness, that we might well doubt, as we watched her faint reflection in the mirage of the lagoon, which was the City, and which the Shadow. I would endeavour to trace the lines of this image before it be for ever lost, and to record, as far as I may, the warning which seems to me to be uttered by every one of the fast-gaining waves, that beat, like passing bells, against the Stones of Venice.’

Ruskin returned to Venice earlier this year through a major exhibition that focussed on his relationship with Venice.

The exhibition was hosted in the sequence of rooms and halls in the Doge’s Palace that Rusking depicted so many times. The backdrop by Pier Luigi Pizzi emphasised the architectural and sculptural features of Gothic and Byzantine, mediaeval and anti-classical Venice that Ruskin so loved and wished to preserve from oblivion.

Ruskin once warned that this city was being so abused and neglected that it would eventually melt into the lagoon ‘like a lump of sugar in hot tea.’ He launched an alarm signal that is still resonant today as ‘the fast-gaining waves … beat, like passing bells, against the Stones of Venice.’

My visit to Venice has been too late to see ‘John Ruskin. The Stones of Venice’ at the Doge’s Palace. It finished on 10 June 2018. But, hopefully, it is not too late to save Venice. 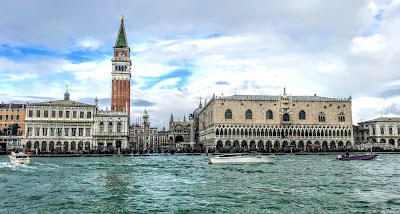 ‘The fast-gaining waves … beat, like passing bells, against the Stones of Venice’ (Photograph: Patrick Comerford, 2018)