Memories of my eldest
brother, Stephen Comerford,
who died 50 years ago 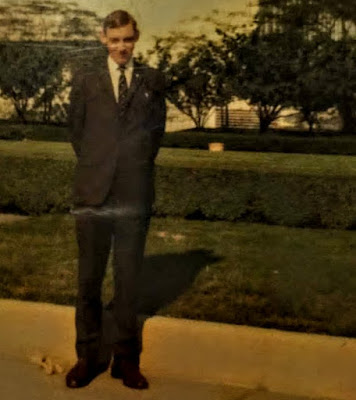 Today marks the fiftieth anniversary of the death of my eldest brother, Stephen Edward Comerford, who died in Durham, North Carolina, at the age of 24 on 18 December 1970.

Now that I am in my late 60s, five or six years is hardly an age gap between people of my generation. But they mark a major chasm when you are a child, and that gap was compounded by the fact that he was the eldest child in the family and I was the fourth.

Steve was born in Dublin on 22 August 1946. He was named after our father, who in turn was named after our grandfather, also named Stephen Edward Comerford (1867-1921). The name Stephen had come into the Bunclody branch of the family because our grandfather was born on 28 December, three days after Christmas Day and two days after Saint Stephen’s Day.

As small children, we were all separated, going to different members and friends of the extended family: Steve went to Millstreet, Co Cork, while I went to Cappoquin, Co Waterford. The accent he acquired in Millstreet brough him the nickname ‘Corky’ in primary school. By the time I was going to primary school, he was already at boarding school.

Brendan Culliton, who is now the President of the Wexford Historical Society, remembers being his friend throughout their shared years in primary school. ‘We were two of the ‘brainboxes’,’ he recalls. ‘In those days, we were two to a desk and I had the privilege of sharing a desk with Stephen for the whole of that year.’

He tells me, ‘Stephen was very well read and was a pleasure to sit beside. He was one of the quieter members of the class, but I can remember the interesting chats we had on every subject under the sun. Before Christmas that year, we had shared what present we hoped to get. I am sure my interests at the time didn’t move far from Meccano and Just William. Stephen told me he had asked for books on history. That struck me as a bit odd, but if that was what he wanted, then that was him.

‘After Christmas, he brought in two bound copies of Carty’s History of Ireland to show me. I remember the covers were green, and plain. Other classmates would have been dismissive of books like these as a ‘Christmas present’. What, after all, was wrong with Dan Dare or Billy Bunter? But what struck me most was that Stephen was thrilled to show off these treasures. He was genuinely happy and, to me that was the important thing.’

Brendan Culliton was a year younger and stayed back a year. ‘So, when I went to Gormanston, Stephen was a year ahead of me. He was also in a different Clann / House, so our paths didn’t cross that often. However, when we did meet, a short greeting was never enough. I always recall there being real substance to the conversation.’

Stephen and I both went to Gormanston, but the five or six-year gap was so wide that by the time I arrived, although there were teachers who remembered him, no-one in my year had ever encountered him. We are also in different houses or clanns, and so any memories were few and rarely shared.

Yet, he was remembered for his achievements in math and sciences, his fluency in the Irish language, and for his interests in chess, swimming and, to a lesser degree, golf. He taught himself the harmonica. I remember his efforts to teach me to play chess – a pleasure that remains – but our academic and sporting interests seldom overlapped.

While I was at Gormanston, he was studying at University College Galway and at University College Dublin. When Brendan Culliton arrived in UCD, he recalls, they ‘encountered each other now and then around Earlsfort Terrace and, when we did, it was always cause for surprisingly lengthy conversations … There is no question that he was very intelligent and hugely talented. He was also genuine and sincere.’

By the time I left Gormanston in 1969, Stephen had completed his BSc and MSc. We spent some time together that summer, sometimes going for meals together in Rathmines. I remember how we sat up together to watch the first moon landing on the night of 20 July 1969.

But by then he was moving to the US and Duke University, Durham, North Carolina, where he was a PhD candidate. I cannot recall that we ever met again. I was training to be a chartered surveyor with Jones Lang Wootton and working on a BSc in estate management with the College of Estate Management, then part of the University of Reading.

He died on 18 December 1970, aged 24, and is buried in Maplewood Cemetery, Durham, North Carolina. The news of his death came in a chilling ’phone call in the middle of the night. His wrapped Christmas presents arrived in the post a few days later, but by then the Christmas tree and the decorations had come down, and the Christmas lights had gone off. It seems Christmas was cancelled that year.

The depths of a mother’s grief are unfathomable, I never fully understood or appreciated the ways my parents continued to suffer ever after, and at the time I never found ways to explain to friends and colleagues how I felt.

Brendan Culliton told me this week that when he heard of Stephen’s death 50 years ago, it ‘was sad news then. It’s still sad news today.’

May his memory be a blessing ז״ל 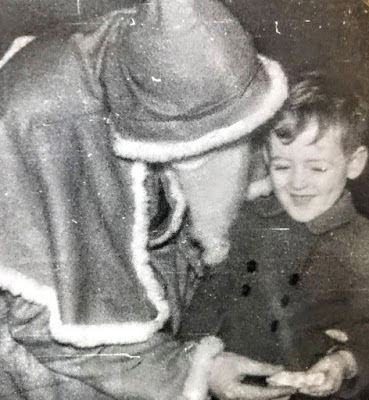 A Christmas-time photograph of Steve visiting Santa as a child

RIP Stephen. I was in the same year in Gormanston and I remember him very well. Regards to you, Patrick from Peter Hunt

RIP Stephen. I was in the same year in Gormanston and I well remember him. Best wishes and regards, Patrick from Peter Hunt.

Such a lovely photo of your brother with Santa. RIP Stephen. He surely had a beautiful face and spirit when he was a little fellow.

I had wondered about Stephen's background and in the age of Google, decided to explore. I knew him at Duke; we occasionally had breakfast together in Fall 1969 in the 'foreign' students residence and I enjoyed his company, as did a small group of use who were early risers. Stephen was unfailingly courteous, and inclined to dress in jacket and tie; I think he had a Church pin in the lapel. He gave the dining room a touch of class. The campus typically cleared out for the Christmas holidays and I travelled back to my country. I returned in late January and was deeply saddened. Perhaps if more of us stayed on; if had someone invited him home to an American Christmas!! The last time we spoke was probably Nov 1970. Stephen was dressed to the nines and carrying a rolled up umbrella. We all had accents, but Stephen's was a delight.