Visiting Clonfert Cathedral
for the first time since
becoming Precentor

The Diocesan Training Programme for priests and readers in Limerick and Killaloe had a lively field trip yesterday [30 April 2018] to the three functioning cathedrals in the diocese.

We began in the morning in Saint Mary’s Cathedral, Limerick, moved on to Saint Flannan’s Cathedral, Killaloe, Co Clare, where we were shown around by the Dean of Killaloe, the Very Revd Gary Paulsen, before lunch, and finished at Saint Brendan’s Cathedral, Clonfert, Co Galway, where local parishioners welcomed us warmly and where I presided at our closing Eucharist.

It was a long day that no only took us to three cathedral, but also brought us through three provinces – Munster, Leinster and Connaught – and through five counties: Limerick, Clare, Tipperary, Offaly and Galway.

Saint Brendan’s Cathedral, Clonfert, was built in the 12th century at the site of an earlier 6th century monastic church said to have been founded by Saint Brendan.

The Diocese of Clonfert was definitively mapped out at the Synod of Rath Breasail in 1111, but the first stone cathedral on this site was not built for another half a century, ca 1167-1180. 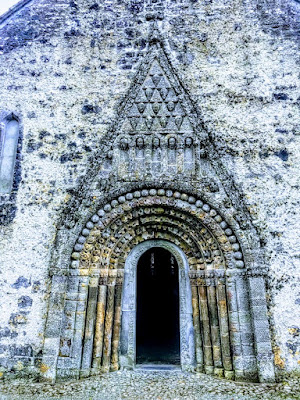 The great west door of the cathedral has been described as the ‘crowning achievement’ of the Hiberno-Romanesque style (Photograph: Patrick Comerford, 2018)

The great west door of the cathedral has been described as the ‘crowning achievement’ of the Hiberno-Romanesque style in architecture and Irish Romanesque carving. It is a scheme depicting Christ in creation, with the Trinitarian theme of the pediment repeated in the triangles separating the human faces of the redeemed that project above animal heads, vegetable forms, animal-like inter-lacings, and the solid, mineral world.

The doorway consists of eight orders of jambs, all inclined inwards, surmounted first by seven orders of arches and then by a triangular pediment, bordered by carvings similar to rolled ropes or cables.

The rest of this doorway is an extraordinary mediaeval picture gallery. Above the apex of the pediment, two human heads protrude from the wall. In the pediment itself, ten more human heads – some bearded, some young and unshaven – appear between triangles with richly-carved ornamentations. Below this stage, more human heads are contained in the arches of a blind arcade immediately above the outermost order of the arch.

The orders of the arches display a variety of ornament, including flowers and beasts’ heads. The capitals are a veritable zoo of animal heads, including cats, horses, donkeys and dragons.

The innermost order is a replacement dating from the 15th century, and is a blue-grey limestone. Here, the carvings include an abbot, a bishop, a scroll of vine leaves and an angel.

Above the doorway, a pointed hood encloses triangles alternating with bizarre human heads. Below this, an arcade encloses more human heads. The supporting arches of the tower at the west end of the cathedral are also decorated with 15th century heads. 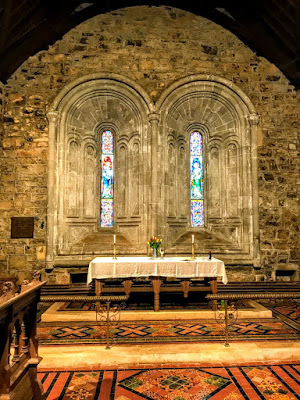 I robed in the barrel-vaulted sacristy, off the north side of the chancel. This sacristy dates from the 15th century and has a fireplace as an unusual feature.

In the chancel, the early 13th century east windows are fine examples of late Romanesque windows. The stained-glass windows, depicting Saint Peter on the north and Saint Paul on the south, were donated by Thomas O’Connor in 1897 to celebrate Queen Victoria’s diamond jubilee.

The chancel arch was inserted in the 15th century, and is decorated with angels, a rosette and a mermaid holding a comb and mirror – perhaps a reference to the stories that grew up around Saint Brendan’s fabled voyages. The chancel floor is covered with encaustic tiles dating from 1870-1880. 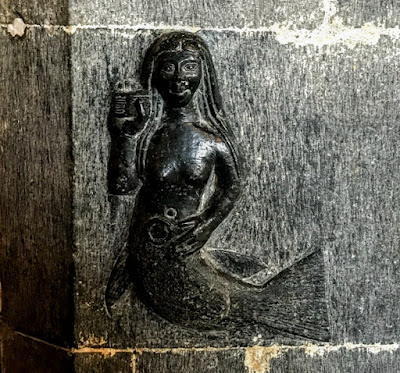 The soft sandstone structure had weathered severely over the centuries. In 2000, Clonfert Cathedral was included in the 2000 World Monuments Watch by the World Monuments Fund. Because the cathedral has a small congregation and few parishioners with limited resources, outside support has been received from many organisations.

The bishop’s throne on the south side of the chancel dates from about 1850, and the altar, chapter stalls and pulpit date from around the same time, all beautifully carved in local oak. 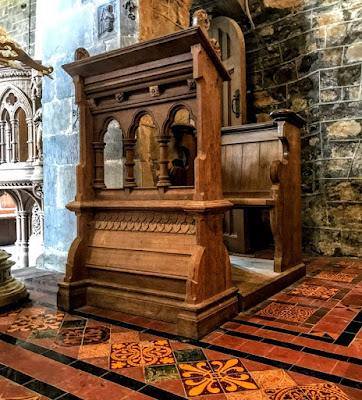 The 16 stalls do not bear the titles of dignitaries or the names of prebendaries, but the Precentor’s stall is presumably the stall on the north side of the choir, opposite the dean’s stall.

However, there is long list of Precentors of Clonfert, and one of my predecessors in this office was Robert Taylour (1689-1744), who built Ardgillan Castle, near Balbriggan, Co Dublin, in 1738.

The second earl became Marquess of Headfort and generations of the main branch of the Taylor or Taylour family continued to live at Headfort, Co Meath, and in Virginia, Co Cavan, while another branch of the family continued to live at Ardgillan Castle until 1962. The estate was sold in 1982 to Fingal County Council, which renovated the house, and it officially opened to the public in 1992. 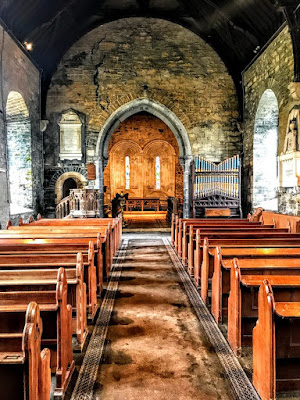