It is always a pleasure when another church asks to use one of my photographs, no matter what tradition or names may be used by the church.

But churches and religious and voluntary organisations are in a different category. Often, they run on shoestrings. By agreeing to their use does not mean I share their beliefs or priorities, but it is only in sharing they we can learn to strive towards unity in the faith.

Recently I was delighted to respond to a request from Didier Vilanova of the Parish of Saint-Matthieu (Saint Matthew), a new, small Orthodox parish near Paris, to illustrate their website with my photograph of Saint Matthew in a fresco on a spandrel beneath the dome of the Analipsi Church in Georgioupoli, between Rethymnon and Chania in Crete.

The parish was formed in 2019, following a division in the former in Exarchate of Russian tradition the previous year.

The Orthodox Churches in the Russian tradition were unwilling to continue under the jurisdiction of the Russian Orthodox Church in the 1920s and the 1930s, fearing the Church in Russia was under state control and being manipulated by Soviet politicians. They turned to the Ecumenical Patriarchate in Constantinople, which offered full communion and administrative protection from 1931.

The best known institution in the archdiocese was the Saint Sergius Orthodox Theological Institute, founded in in Parish 1925 by Metropolitan Eulogius Georgievsky and sometime home of several well-known Orthodox theologians and writers of the 20th century, including Georges Florovsky, Alexander Schmemann and John Meyendorff. However, Vladimir Lossky did not teach taught at Saint Sergius, nor was he a member of the archdiocese, remaining loyal to the Moscow Patriarchate.

The archdiocese was regularised by the Ecumenical Patriarchate of Constantinople in 1971, when its internal autonomy recognised by Patriarch Athenagoras. It became an exarchate or autonomous diocese with its own archbishop in new reorganisation introduced in 1999 by Patriarch Bartholomew of Constantinople.

But tensions between Moscow and Constantinople, and tensions over the demands to preserve Russian ethnic identity and the desire to give expression to the cultural diversity of the priests, people and parishes, always threatened the life of the archdiocese and its dependent dioceses.

These tensions increased when Bishop Basil (Osbourne) and a number of priests and parishes in the Diocese of Sourozh in Britain and Ireland transferred from Moscow to Constantinople in 2006.

Constantinople moved to dissolve the separate Russian diocese 2018, and priests, parishes and people were urged to join other parishes dioceses within the Patriarchate of Constantinople. The responses and divisions that followed became part of the divisions between Constantinople and Moscow over the future of the Orthodox Church in Ukraine.

When the Russian Church formed a new exarchate based in Paris at the end of 2018, a group of parishioners in Paris recognised the need for a new French-speaking parish that was loyal to the Ecumenical Patriarchate. The new Parish of Saint-Matthieu was formed Easter 2019.

The new parish welcomes a diversity of people in the Paris region, and says it wishes ‘to build itself in a spirit of overcoming the disturbances which agitate our Churches and in the continuity of the heritage of the great pastors of the ex-exarchate who worked for the French-speakers, such as Fathers Boris Bobrinskoy, Pierre Struve, Pierre Tchesnakoff, and so many others.’

Since September 2020, the parish has enjoyed hospitality of the Catholic Diocese of Nanterre in the Chapel of the Annunciation in the Church of Saint-Jean-Baptiste. It is at 158 Avenue Charles de Gaulle in Neuilly-sur-Seine, near the Pont de Neuilly Metro Station. The Divine Liturgy is celebrated on Sunday mornings at 10 a.m. 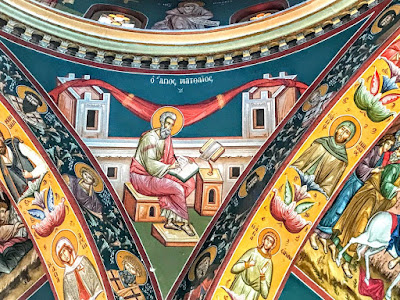 Saint Matthew depicted in a fresco in the dome of the Analipsi Church in Georgioupoli, between Rethymnon and Chania in Crete (Photograph: Patrick Comerford)