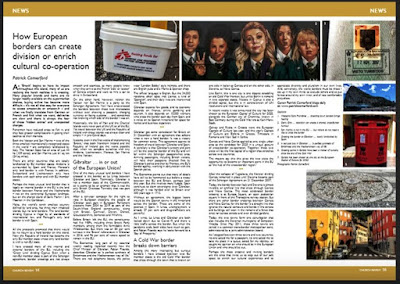 A two-page feature in the ‘Church Review’ on borders, creating divisions and enriching cultural co-operation in Europe (Photographs: Patrick Comerford)

As ‘Brexit’ begins to have its impact throughout this island, many of us are realising the harsh realities it is creating. The Republic Ireland has become the only EU member state whose only land border is with a non-EU state.

My monthly column in the February 2021 edition of the Church Review, the Diocesan magazine in Dublin and Glendalough (pp 14-15), looks at how European borders can create division or enrich cultural co-operation.

I look at some of the peculiar borders and divisions in Europe, and take examples from Gibraltar, the Isle of Man, San Marino and the Vatican.

But I also look at the old Cold War border that slices through the town that is known on one side in Italian as Gorizia and on the other side, in Slovenia, as Nova Gorica. They have come together in a unique venture that allows them to share as one, single urban area, the title of ‘European Capitals of Culture’ in 2025.

But more about this tomorrow when the Church Review is published (see HERE).

In the regular ‘From the Archives’ slot on page 8, the Church Review looks back 20 years ago to the February 2001 edition and recalls:

‘Meanwhile, Patrick Comerford was looking forward to the introduction of the new edition of the Book of Common Prayer, which was due to be published in 2004. He reported that the editor, Canon Brian Mayne, had undertaken that the 204 Book of Common Prayer would be both “user-friendly and a lovely book.” He was writing as the Church of England had adopted new prayer books: Common Worship and Common Worship: Pastoral Services.’