Beeves Rock, a ‘stark’ lighthouse
in the Shannon Estuary since 1855 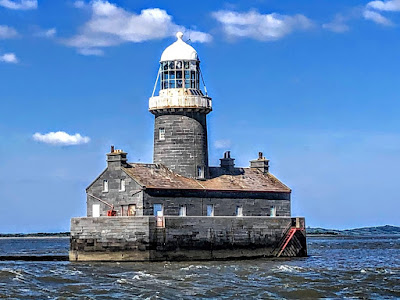 The lighthouse on Beeves Rock, directly north of Askeaton, was built in 1847-1855 (Photograph: Patrick Comerford, 2021)

During our visit to Canon Island and Canon Island Abbey in the Shannon Estuary on Sunday afternoon, we stopped to visit Beeves Rock, a stark and austere-looking lighthouse in the middle of the Shannon. Here the invisible boundary between Co Clare and Co Limerick cuts through the powerful and highly tidal estuary.

The lighthouse on Beeves Rock was built in 1847-1855, directly north of Askeaton, at the mouths of the River Deel and the River Fergus in the Shannon Estuary. The lighthouse replaced an earlier, 40-year-old beacon. While it was being built, the work was slowed by adverse tidal conditions that covered the rock with 8 feet of water at high tide.

But, by the time the lighthouse began operating in 1855, its designer, George Halpin, had already died. The lighthouse on Beeves Rock was designed by George Halpin (1779-1854), Inspector of Works and Lighthouses for the Ballast Board from 1810 until his death in 1854.

Halpin was brought up as a builder, and in 1800 he was appointed Inspector of Works to the Ballast Board, following the death of Francis Tunstall. He was admitted a freeman of the City of Dublin in 1804 as a member of the Guild of Masons.

Halpin’s responsibilities increased substantially in 1810 when the Board was placed in charge of all the lighthouses in Ireland. As a result, his post was designated Inspector of Works and Lighthouses. In this capacity, he designed a number of lighthouses around the entire coastline of Ireland.

His son, George Halpin, was appointed his assistant in 1830. His other assistants included John Swan Sloane.

In addition, Halpin was appointed to inspect and survey the state of the Bank of Ireland’s branches throughout Ireland in 1829, and he was designated the bank architect in 1831. However, he seems to have designed only two branch banks – Dundalk (1845) and Portlaoise (1850).

Halpin collapsed and died on 10 July 1854 while he was on one of his lighthouse inspections for the Ballast Board, and he was buried at Mount Jerome Cemetery in Harold’s Cross, Dublin. He was succeeded as the Board’s Inspector by his son George Halpin. 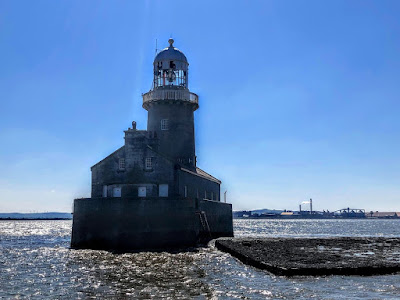 The lighthouse on Beeves Rock was designed by George Halpin (Photograph: Patrick Comerford, 2021)

Beeves Rock Lighthouse has been described as ‘bizarre’ not only for its architecture but also for the story of one of its keepers.

The lighthouse is basically a house with a lighthouse coming up through the roof, according to Roger O’Reilly, the Drogheda-based historian of Irish lighthouses. ‘It’s built on a rock that’s only exposed at low tide,’ he told the Journal in an interview. ‘So they only had a certain amount of time to build.’

James McGinley, who the keeper in the early 20th century, was the maternal grandfather of the former Taoiseach Enda Kenny, who us currently presenting the programme Iarnród Enda on RTÉ.

As Beeves Rock was only accessible by boat, life was difficult for newly-married James McGinley and his wife Margaret Heekin. While her husband was stationed on the rock, Margaret lived in a Commissioners of Irish Lights’ cottage near Askeaton.

Communication between the couple each day was only possible by semaphore. ‘They would wave flags at each other. It was the early 20th-century version of texting, and that’s how they communicated until he had shore leave, so that was certainly not a romantic start to the marriage,’ author and illustrator Roger O’Reilly told TheJournal.ie.

The records show that James McGinley was 25 when he entered the lighthouse service in 1905. He spent six months training at the Baily Lighthouse in Howth before becoming assistant keeper on Rathlin O’Birne in Co Donegal.

He was stationed on Beeves Rock in the Shannon in 1910, and sometime later, during World War I, on Tuskar Rock off the Wexford coast. McGinley took up service as keeper at Loop Head, Co Clare, in 1922 before returning to Rathlin O’Birne for his final five-year posting in 1935.

Beeves Rock was converted to an unwatched lighthouse in 1933 and was automated. It has been under the authority of the Limerick Harbour Commissioners since 1981.

The history of Beeves Rock is included with the history of 80 other lighthouses in Roger O’Reilly’s book, Lighthouses of Ireland – An Illustrated Guide to the Sentinels that Guard our Coastline.

According to O’Reilly, the success of Beeves Rock Lighthouse is measured by the fact that few vessels have sunk in the stretch of river since it was built. One of the few wreckages in the estuary was a Dutch aircraft carrying diamonds that crashed with its cargo in 1957.

Since the final lighthouse was automated in 1997 – the Baily in Howth – all the work of keeping Ireland’s lighthouses functioning is done remotely. But, despite advancing technology, lighthouses still serve as crucial navigational aids for the maritime traffic around Ireland.

When he was Taoiseach in 2012, Enda Kenny visited Beeves Rock lighthouse where his grandfather had been the keeper in the early 20th century. He also visited the Loop Head Lighthouse – dating back to the 1670s – on the most westerly tip of Co Clare. 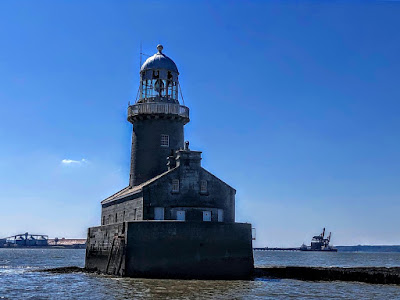 Where is the best place to view it from without use of a boat ? Thanks.