Spies, lighthouses, Jedis
and legends of lovers on
the rocks at Loop Head 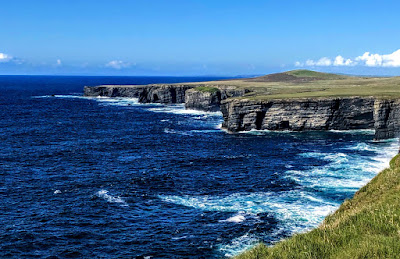 The cliffs and sea stacks at Lovers’ Leap the end of Loop Head in Co Clare (Photograph: Patrick Comerford, 2020)

After lunch in Keating’s in Kilbaha on Sunday afternoon, and a stroll around the small harbour in the summer sunshine, two of us decided to continue on to Loop Head and the Bridges of Ross. As we left, we resolved that if we fail to get to Greece this summer, we must return to Kilbaha.

Loop Head is a slender finger of land pointing out into Atlantic Ocean from the most westerly point of Co Clare, between the ocean and the Shannon Estuary. But for a meagre mile of land connecting Loop Head to the rest of Co Clare, this peninsula could be an island.

Loop Head is in the middle of the Wild Atlantic Way, 2,500 km of the finest coastal scenery in Ireland. The peninsula is dotted with beautiful beaches and coves, there are panoramic cliff views, seafood restaurants and bars, a choice of aquatic activities, and an abundance of beauty spots to pause at and to stand in awe and wonder.

The Loop Head peninsula was awarded a European Destinations of Excellence Award in 2010, In 2013, Loop Head was named by The Irish Times in 2013 as the ‘Best Place to Holiday in Ireland.’ It has also been shortlisted in the ‘Best Destination’ category at the ‘World Responsible Tourism’ awards.

The peninsula is the only Irish destination listed in the 2014 ‘Global Sustainable Top 100 Destinations’ and in 2015 it received the Gold medal at the Irish Responsible Tourism Awards. Part of the movie Star Wars: The Last Jedi was filmed at Loop Head. 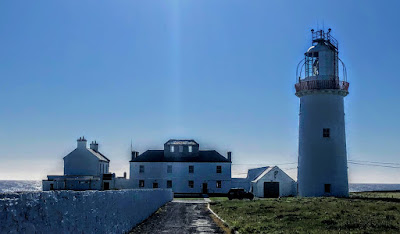 The lighthouse at Loop Head dates from 1670 (Photograph: Patrick Comerford, 2020)

There has been a lighthouse at Loop Head since 1670. At first, this was a signal fire on the roof of the lightkeeper’s single-storey cottage, that can still be seen on the grounds. There are 80 lighthouses in Ireland, all automated with 40 located offshore and 40 located on the mainland.

The present 23-metre high tower was built in 1854. It was designed by George Halpin. This is a free-standing circular plan, single bay, four stage lighthouse, surrounded by a metal framed blazed lantern with a metal walkway and cut limestone walls. The range of the light is 23 nautical miles and its signal is a white light flashing four times in 20 seconds. There is a walled enclosure around the lighthouse complex.

Loop Head lighthouse is closed for the 2020 season to facilitate upgrading the public water supply and other essential works. But when the site is open, the Light Keeper’s Cottage holds an exhibition on the history of Irish Lighthouses and visitors are offered a guided tour up the tower, where the balcony offers views south as far as the Blasket Islands and north to the Twelve Pins in Connemara. 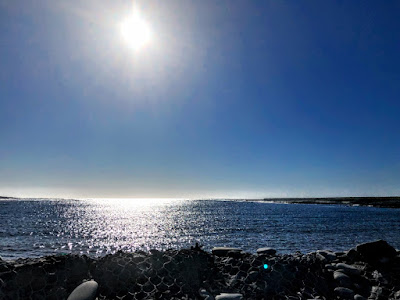 Just a short walk from the Loop Head Lighthouse, at ‘Lovers’ Leap,’ is a majestic seastack known as ‘Diarmuid and Gráinne’s Rock,’ a stunning natural wonder shrouded in legend. The legend says the mythical Diarmuid and Grainne were running around Ireland, trying to escape from the ageing chief Fionn MacCool, who Grainne was due to marry, and spent a night on this rock.

Loop Head was originally called Leap Head or Ceann Léime, a name that goes back to the ninth or tenth century and originates in the folk stories about Cúchulainn. The hag or witch Mal was chasing Cúchulainn around Ireland. If she managed to touch him, he was to fall in love with her. In his efforts to escape Mal, Cúchulainn jumped across to the sea stack and Mal followed. Cúchulainn jumped back to the mainland but Mal fell into the sea. Her body was said to have washed up at Hag’s Head, near the Cliffs of Moher, and her blood is said to have washed ashore at Milltown Malbay.

A restored ‘EIRE’ sign at Loop Head is one of 85 ‘EIRE’ signs placed along the western Irish seaboard during World War II to warn US and German pilots that they were entering neutral territory. Each sign was also given a number so pilots might know where they were, an early form of GPS, and Loop Head is number 45.

An aircraft first spotted by the Look-Out Post (LOP) at Loop Head in 1943 was carrying a spy for Nazi Germany, John Francis O’Reilly (‘the flighty boy’) from nearby Kilkee. He parachuted and landed near Kilkee but was questioned and arrested the next day at his family home.

O’Reilly claimed connections with the IRA from his boyhood. Before World War II, he had worked in the customs office in Rosslare, Co Wexford, spent three weeks testing a monastic vocation at Buckfast Abbey, and then worked as a kitchen porter in hotels in Penzance and Falmouth, digging air raid shelters in London, as a barman in Kentish Town, as an unsuccessful door-to-door book salesman and in the Dominion Hotel, Lancaster Gate. He left London in May 1940 he went to Jersey, where he worked as a farm labourer.

O’Reilly was working in Jersey in 1940 when the Channel Islands were occupied by Nazi Germany. He moved to Germany in 1941 and worked at a steel mill before joining the staff of Irland-Redaktion, the Irish section of the German propaganda broadcasting unit. He worked with worked with Francis Stuart, Frank Ryan and William Joyce (‘Lord Haw-Haw’) and broadcast back to neutral Ireland, then joined German Military Intelligence and started planning his return to Ireland.

O’Reilly landed at Moveen on the night of 19 December, the last of the motley band of fanatics, adventurers and misfits in the pay of Nazi Germany who landed as spies in neutral Ireland.

When he was arrested in Kilkee, he was sent to Arbour Hill Military Detention Barracks in Dublin. He escaped in 1944 but was recaptured, again at his family home in Kilkee when the bounty on his head was collected by his father, Bernard ‘Casement’ O’Reilly, a former RIC constable who was a member the group that arrested Roger Casement.

O’Reilly was released on 12 May 1945, and after World War II, O’Reilly bought the Esplanade Hotel on Parkgate Street, Dublin. He died in London in 1971 and was buried in Glasnevin Cemetery in Dublin.

From Loop Head, we continued on to the Bridges of Ross, where three spectacular natural sea arches once stood, until two of them fell into the sea. Today, although only one ‘bridge’ remains, the name persists in the plural. 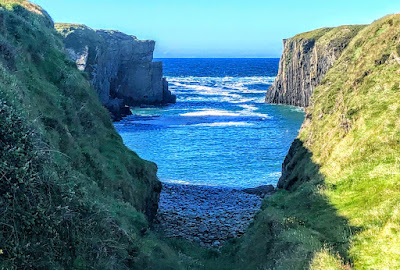 At the Bridge of Ross at Ross Bay, looking north to the Atlantic Ocean (Photograph: Patrick Comerford, 2020)