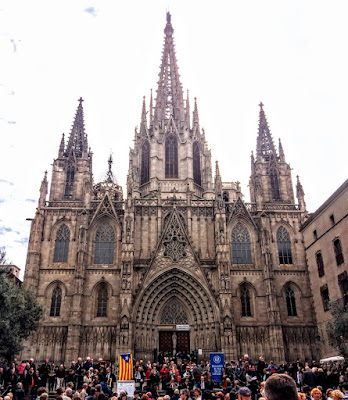 The Gothic splendour of Barcelona Cathedral dates from the 13th to 15th centuries (Photograph: Patrick Comerford)

Earlier in this series, I returned to the Cathedral of Saint James in Santiago de Compostela (31 March 2021, HERE), and the Basilica de la Sagrada Familia in Barcelona (10 April 2021, HERE). This morning (1 June 2021), my photographs are from Barcelona’s great Gothic Cathedral of the Holy Cross and Saint Eulalia. 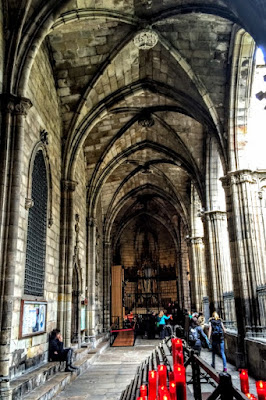 The cloisters of Barcelona Cathedral include side altars and side chapels, an enclosed garden, and a fountain a pond (Photograph: Patrick Comerford)

This cathedral dates back to 343, and some claim it stands on the site of an earlier Roman temple. The present cathedral was built in the 13th to 15th centuries, with the main work carried out in the 14th century.

The choir stalls display the coats-of-arms of the knights of the Order of the Golden Fleece, whose Spanish chapter meet here. The roof is known for its gargoyles, depicting a wide range of domestic and mythical animals. The neo-Gothic façade was completed in the late 19th century.

An interesting part of the cathedral is the cloister, with its own series of side altars and side chapels, an enclosed garden, and a fountain a pond.

The secluded Gothic Cloisters were completed in 1448. At the heart of the cloisters is the Fountain of the Geese (Font de les Oques), the fountain and pond that provide a home to 13 white geese.

Saint Eulalia (Aulaire, Aulazia, Olalla, Eulària) – her name means ‘well spoken’ – was born ca 290. In late third century Barcelona, the Roman Consul Dacian was engaged in the relentless persecution of local Christians. Saint Eulàlia presented herself before Dacian to proclaim her Christian faith and to rebuke him for his harsh treatment of Christians.

The square in front of Barcelona Cathedral, the Pla de la Seu, is a popular meeting place, but also acts as a stage for some of the best buskers in the city. On Sunday mornings, the square also provides a stage for the Sardana Dances, a unique Catalan folk dance that anyone can join. 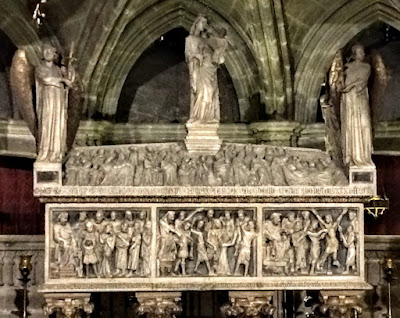 The panels on the alabaster sarcophagus of Saint Eulalia recall her tortures and martyrdom (Photograph: Patrick Comerford)

13 Then they sent to him some Pharisees and some Herodians to trap him in what he said. 14 And they came and said to him, ‘Teacher, we know that you are sincere, and show deference to no one; for you do not regard people with partiality, but teach the way of God in accordance with truth. Is it lawful to pay taxes to the emperor, or not? 15 Should we pay them, or should we not?’ But knowing their hypocrisy, he said to them, ‘Why are you putting me to the test? Bring me a denarius and let me see it.’ 16 And they brought one. Then he said to them, ‘Whose head is this, and whose title?’ They answered, ‘The emperor’s.’ 17 Jesus said to them, ‘Give to the emperor the things that are the emperor’s, and to God the things that are God’s.’ And they were utterly amazed at him. 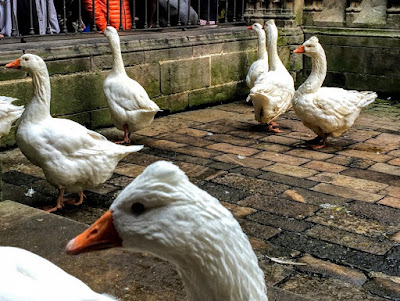 A flock of 13 white geese has permanent sanctuary in the cloisters of Barcelona Cathedral (Photograph: Patrick Comerford)

The Prayer in the USPG Prayer Diary today (1 June 2021) invites us to pray:

We give thanks for the work of Hope for the Future. May we encourage churches to become more involved in the fight against climate change. 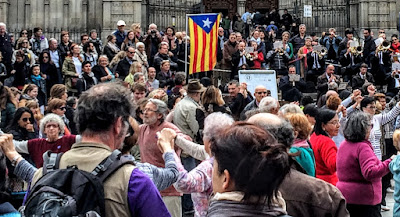 The Catalan national dance, the sardana, is performed by hundreds of people in the Plaça de la Seu every Sunday afternoon (Photograph: Patrick Comerford)