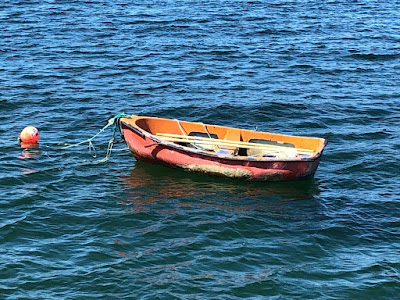 A small boat in the water at Kells Bay, near Cahersiveen, Co Kerry, at the weekend (Photograph: Patrick Comerford, 2021)

After visiting Kells Bay House and Gardens at the weekend, two of us spent some time at the beach and pier in Kells Bay, about 15 km west of Glenbeigh and about 3 or 4 km east of Cahersiveen on the north coast of the Iveragh Peninsula and the Ring of Kerry.

Kells Bay House and Gardens are 200 metres from the beach, with a period house, sub-tropical gardens and a coffee shop and restaurant. Kells Bay is a secluded, Blue Flag beach, surrounded by mountains to the west, east and south, and views to north out into Dingle Bay, with the Blasket Islands in the distance.

Kells Bay is reached along a narrow country road off the N70. It is an idyllic sandy beach, with a harbour and small pier at the east end, and the crystal-clear water is fresh in Summer (14C+).

The Gulf Stream runs close to the area, providing a micro-climate ideal for plant growth. Kells Beach is within the Killarney National Park, Macgillycuddy Reeks and Caragh River Catchment Special Area of Conservation (SAC), and within the Iveragh Peninsula Special Protection Area (SPA).

During our afternoon visit, a small group of people were gathered around a small trawler at the end of the pier, and two council workers were moving large boulders from the white sandy beach.

But it felt as though we had the beach all to our selves, with only a half dozen people on the sand or in the water. Two men were swimming, a couple and their dog were enjoying the sunshine on the beach, and a couple spent half an hour in the water in kayaks.

The couple in the pair of kayaks may have been in their late 40s, and they reminded meof a scene on the old town beach in Rethymnon almost 40 years ago in the mid-1980s.

We had rented a private apartment in a residential suburban block for three weeks, without the normal facilities holidaymakers associate with Greek apartment lettings, such as a swimming pool and a bar.

Instead, we used the beach each day, and, although I was then in my mid-30s and had gone to a school with a swimming pool, I only learned to swim at that stage of life at that beach. The beach was near the harbour, and is now closed to swimming. But at the time it was popular, and we left our valuables at the beach bar when we went swimming.

It was an early introduction to Greece, and one of the bar staff assured us candidly that we were safe leaving our belongings at the bar. We could trust Greeks, he told us, and without batting an eyelid or showing any sense of embarrassment, told us it was the tourists we had to be concerned about.

It was October, the end of the season, and there were few tourists on the beach by then. But out in the water, a middle-aged English tourist in his late 40s was trying to teach himself to use a surfboard.

The man seemed to have little confidence, but every time he managed to climb onto gis surfboard his wife, standing on the shoreline fully dressed, would shout out as a way of encouragement, ‘Who’s the king of the castle?’

Neither of them had noticed a handful – two or three – of other English tourists who were on the beach, watching every move. They tittered and smirked every time she cried out encouragingly, and quietly, unnoticed to the husband and wife, slipped into the water, and quietly went underwater.

Eventually, the more man steadied himself enoug, he matched this with a new sense of confidence and boldness, and stood up straight on the surfboard.

But as the woman called out, the small band of miscreants heaved from under the board, and he toppled over, falling into the water, retaining none of his dignity.

He splashed and surfaced. By the time he had steadied himself, his assailants had left the water.

By the time he got back to his sobbing wife on the shoreline, they had disappeared.

I later wondered whether it was a planned ambush. Were they all staying in the one place? Did they actually know each other?

I never saw the couple on the beach again. Perhaps their holiday was already coming to an end. Perhaps they moved along the beach to the longer stretch of white sand at the east end of the town.

Did he ever really get enough confidence to use a surfboard properly?

We stayed on Rethymnon, I continued to learn how to swim on that beach in those warm October days, and our watches and wallets remained safe at the beach bar. Today, traffic and polluton from the harbour and the constrution of a new marina have closed the old town beach to swimming and diving.

If the EU agrees to safe passage between member states for people who have been vaccinated, I may even get back to Rethymnon before October arrives. But, meanwhile, on this road trip, we travelled on to Cahersiveen and another island in the sun, Valentia Island. 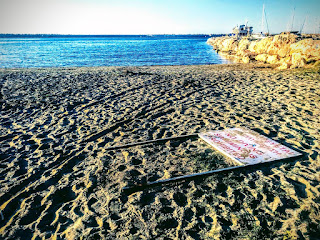 Lost in the sands of time … an old sign prohibiting swimming and diving at the old town beach in Rethymnon (Photograph: Patrick Comerford)