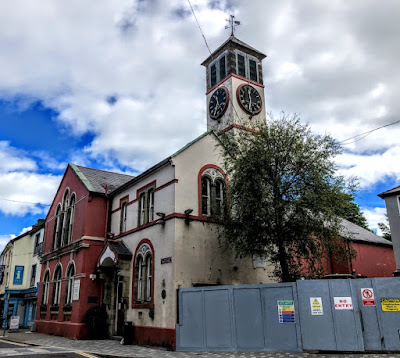 The Town Hall has been a focal point for social and cultural life in Skibbereen since the 1850s (Photograph: Patrick Comerford, 2021)

Skibbereen is the ‘hub’ of West Cork and an ideal base to discover the delights of the area. I had explored Saint Patrick’s Cathedral and Abbeystrewry Church, the Church of Ireland parish church, during my road trip or ‘staycation’ in West Cork, and I had seen the sad and charred ruins of the former Mercy Convent chapel designed by Pugin and Ashlin.

But walking around Skibbereen, I found other interesting buildings too, and some fine street art celebrating important figures from science and literature in the town.

Since the late 1850s, the Town Hall has been the most prominent building in the Town Square and a focal point for cultural and social life in Skibbereen.

As far back as 1801, the Becher family, who owned that part of the town – and who donated the sites for the cathedral and the convent – had mapped the site of the Town Hall stands for a Market House, and the Bechers established a thread market there in 1824. The Market House was also used as the rent office for the Becher estate.

Sir Henry Wrixon-Becher (1826-1893) erected a new Town Hall on the site in the early 1860s, replacing the old Market House and Toll House that had was in a dilapidated state. The new building had an extended marketplace on the ground floor and a large hall or theatre on the first floor.

Becher offered to sell the Town Hall to the Town Commissioners, who held their meetings in the Courthouse or in the Land and Labour Hall on Bridge Street. However, the debate about buying the Hall was not without controversy.

Becher refused to sell the Town Hall without an agreement that it should not be used for any political or sectarian purposes – a clause caused that divided the Town Commissioners and that was opposed by the nationalist members.

The Skibbereen United Trades Association opposed buying the Becher hall and wanted the Town Commissioners to provide employment by building a new hall. In addition, many workers opposed buying what was Becher’s rent office. 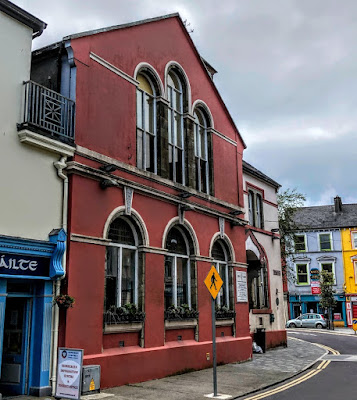 The Town Hall was bought by Skibbereen Town Commissioners in 1866 (Photograph: Patrick Comerford, 2021)

After years of debate, the Hall was bought by the Town Commissioners in 1866. But a year later, Henry R Marmion, agent for the Townsend estate which owned the Bridgetown side of town, proposed building a Town Hall of their own in Bridge Street.

Meanwhile, the upstairs hall in the Town Hall became a venue for travelling theatre groups and musicians. The town clock was presented in 1878 by The O’Donovan of Liss Ard and the clock tower was added to accommodate it.

Becher’s proviso that the Town Hall would not be used for political meetings was soon ignored, and some of the major figures in Irish nationalism spoke at meetings there.

Charles Stewart Parnell addressed a crowd in the square from the upstairs window of the Town Hall on 10 April 1880. Michael Davitt addressed a meeting in the Hall in August 1887. Maud Gonne spoke there on Saint Patrick’s Day 1902. Other political figures who spoke there included Eamon de Valera, Michael Collins, Terence MacSwiney and Mary MacSwiney.

Harold Pinter, who received the Nobel Prize for Literature in 2005, made an early stage appearance at the Town Hall. Pinter began his career as an actor and toured Anew McMaster’s Touring Company in 1951-1952. They played six consecutive nights in the Town Hall that September, performing a different play each night.

McMaster staged the last show in the Town Hall. On the night of 13 August 1955, his travelling theatre company performed the Greek classic Oedipus Rex. Later that night, the Town Hall was extensively damaged by fire. The McMaster company’s sets and costumes were destroyed too, as well as the library’s large stock of books. The Town Hall, the centre of commercial, social and cultural life in Skibbereen for over a century, was destroyed.

Within weeks of the fire, Skibbereen Urban District Council decided to rebuilt the Town Hall on the same site. A new and bigger Town Hall was opened and blessed by Bishop Cornelius Lucey on 2 February 1960.

In the 1960s, the Town Hall staged many local and touring theatrical productions. The Cathedral Players continued to stage plays and the annual Skibbereen pantomime, first held in 1963, continued for many years. Weekly dances were held the 1960s and 1970s when Ireland’s showbands were at their peak. The Skibbereen Theatre Society continues to stage at least one production annually.

The Town Hall ceased to be the local council offices in the 1990s when the UDC moved to new offices over the Library in the Bishop Kelly Memorial Institute in North Street. Town Councils in Ireland were abolished in 2014.

But the Town Hall on the corner of the Square and North Street remains a testament to Victorian imagination and diversity in the use of architectural revival styles, and its survival continues to enrich the architectural heritage of Skibbereen. 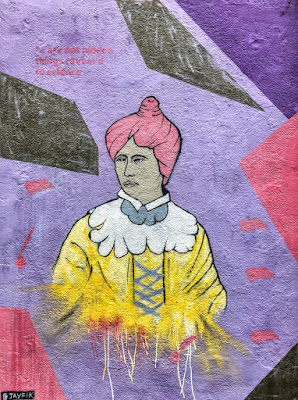 In the street art that decorates Skibbereen, two works commemorate two sisters born in the town: Ellen Mary Clerke (1840-1906) and Agnes Mary Clerke (1842-1907). They were the daughters of John William Clerke (1814-1890), a bank manager in Skibbereen, and his wife Catherine Mary Deasy.

Ellen Mary Clerke was born in Bridge Street on 26 September 1840. She never had any formal education and was educated at home by her parents and tutors. Ellen became an acclaimed author and published works in several European languages.

Her best-known work is Fable and Song in Italy, and also published a novel Flowers of Fire.

Ellen Clerke joined the staff of the influential Catholic weekly newspaper The Tablet in the 1880s, and continued to edit it until she died. She was highly regarded as a commentator on Italian and German politics, and was recognised as a scientific journalist, specialising in geography and anthropology.

She also contributed to the Observatory magazine and the Journal of the British Astronomy Association, and won wide recognition for a major article on the dock labourers’ strike in 1889.

Her sister Agnes Mary Clerke was born in Bridge Street on 10 February 1842. She too was educated at home by her parents and tutors, and she developed an early interest in languages and music. The family moved to Dublin in 1861 and then to Queenstown (Cobh), and later lived in London and Florence.

From her childhood, Agnes was interested in astronomy and wrote several books on the subject. She went on to become a pioneering figure in astronomy and astrophysics in the late 19th century.

Agnes made an impact in the fields of astronomy and cosmology and for a quarter of a century she was the leading writer on astronomy and astrophysics in the English-speaking world.

Her best-known book, A Popular History of Astronomy during the Nineteenth Century (1885) continues to be reprinted. Her other books include The System of the Stars (1890) and Problems in Astrophysics (1903). She also wrote 150 biographical entries in the Dictionary of National Bopgraphy.

The Clerke Crater on the Moon, close to the eastern edge of the Sea of Tranquility, is named after Agnes Mary Clerke. She died in London in 1907.