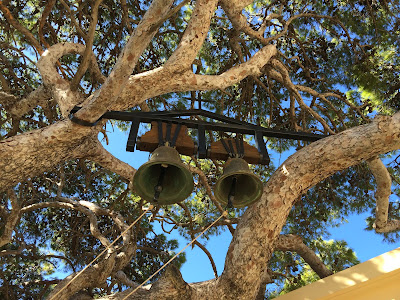 Monastic bells in a tree in the courtyard of Preveli Monastery on the south coast of Crete (Photograph: Patrick Comerford)

This morning (28 June 2021), my photographs are from the Monastery of Preveli, on the south coast of Crete, continuing a week of photographs from monasteries in Crete. 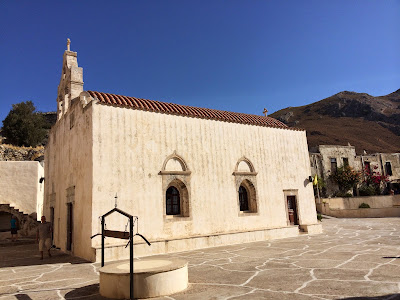 The katholikon or main church in Preveli was built in 1835-1837 on the site of earlier churches (Photograph: Patrick Comerford)

The Monastery of Preveli is 37 km south of Rethymnion, and while the monastery lies is within the Diocese of Lambis and Sfakion, it comes under the direct oversight of the Ecumenical Patriarch, making it the Holy Stavropegic and Patriarchal Monastery of Saint John the Theologian.

The monastery is famous among Greeks for its role in struggles against both the Turks and the Germans in the 19th and 20th centuries, and is celebrated in Greek lore and in books and movies for its part in helping allied soldiers escape Crete in World War II.

There is strong evidence that an early monastery stood on the site of the lower monastery during the Second Byzantine period in Crete, in the 10th or early 11th century. But the monastery was probably founded in the Middle Ages, when Crete was under Venetian rule.

The original name was ‘The Monastery of the Great River at the Island of Crete.’ Some stories say it was founded by a feudal lord named Prevelis. Others say it is named after a repentant murderer who fled his home in Preveliana village in the 16th century, found refuge in the monastery and gave his life savings in thanks for his life being saved. Another tradition says Preveli takes its name from Abbot Akakios Prevelis, who renovated the monastery in 1670. At least three or four abbots in the 17th and 18th century were from the Prevelis family, a family from Rethymnon descended from the Kallergis, a Byzantine noble family.

The earliest records for the monastery go back to 1594, a date engraved on a monastery bell. When the Turks occupied Crete in 1649, they destroyed the monastery of Preveli. But the monastery was restored, and in the centuries that followed became a centre for education and a centre for resistance to Ottoman rule.

Abbot Efraim Prevelis took part in the revolution led by John Vlachos or Daskalogianis in 1770. He was sentenced to death but was finally pardoned in 1798 after Patriarch Gregory V intervened with the Sultan.

To secure the monastery’s privileges and estates, Abbot Ephrem sought the protection of the Patriarchate, and Preveli received the status of a patriarchal and stavropegic monastery. As a sign of this new status, he returned from Constantinople with the Cross that has remained the most prized relic in Preveli.

In 1821, the Abbot of Preveli, Melchisedek Tsouderos – whose family was from Rethymnon and who were said to be descended from the Byzantine imperial family – became a member of the secret Greek revolutionary organisation, the Philiki Etairia (the Society of Friends).

On 25 May 1821, the abbot and a group of rebels hoisted the Greek flag on the hills overlooking the village of Rodakino, and he soon became the leading figure in the revolutionary events of 1821 in Crete.

The abbot organised, equipped and financed the first rebel units against the Turkish forces, and managed to rescue the monks before the Turks destroyed the monastery in a reprisal attack. Abbot Melchisedek’s force, made up of monks and civilians, went on to fight in many battles in western Crete. He was fatally injured in a battle near the village of Polemarchi in the Kissamos area on 5 February 1823. He died while his companions were trying to move him to the village of Platania, where he was buried. He is commemorated in the name of Tsouderon Street in Rethymnon.

Preveli was active again in organising rebellions against the Turks in the 19th century. The disaster at Arkadi in November 1866 did not deter Abbot Agathangelos and his monks, who fed and sheltered up to 200 rebels in Preveli on a daily basis. In a revenge attack on 7 July 1867, Resit Pasha and 8,000 Turkish soldiers set fire to the Lower Monastery and its farms in the neighbouring villages. The Rear Monastery was saved at the last moment and continued its active role until the end of the revolution in 1869.

When yet another revolution broke out in 1878, the Rear Monastery became rebel headquarters and the abbot fought at the front line. The revolutions were instrumental in securing Crete’s eventual autonomy in 1896, followed by political union with Greece 100 years ago in 1913.

During the German occupation of Crete in World War II, 5,000 Greek, Australian, New Zealand and British troops who fought in the Battle of Crete in 1941 found themselves stranded on the island. Many found shelter in Preveli and others were hidden in homes and farms nearby.

The Abbot, Agathangelos Lagouvardos, helped organise their escape to Egypt on two submarines on the nights of 31 May and 1 June 1941 and 20 and 21 August 1941. In a revenge attack on 25 August 1941, the Germans plundered the monastery, the Lower Monastery was destroyed completely, and many of the monks were sent to Firka Prison in Chania. Among the precious items plundered by the Germans was its most precious relic, the miraculous Cross of Abbot Ephraim Prevelis.

But the monks who returned immediately began rebuilding the Rear Monastery with help from local people and from other monasteries. Meanwhile, Abbot Agathangelos had joined the Greek Army in the Middle East as a chaplain. In the courtyard, a series of monuments recalls the role of the monastery in World War II.

The Rear Monastery is at the foot of a mountain and overlooks the Libyan Sea. The monastery is the shape of an irregular letter Π, with buildings on the north, the west and part of the east sides of a level area, with the main church or katholikon in the centre of the courtyard.

The katholikon stands on the site of the older, probably frescoed church that was demolished in 1835. The present church was completed in 1837 and was consecrated that year. This is a large two-nave building, unified internally by a sequence of three arches.

A long, enclosed chamber, once used as stables, now houses the museum of the monastery. The collection of icons covers a period from the early 17th century to the end of 19th century.

The best-known item on display is not in the museum but in the katholikon. This is the large, richly decorated silver cross brought back to Preveli from Constantinople by Abbot Ephrem and now kept in a special shrine in the main church.

Today, there are only three monks living in the monastery. It is a crisis in monastic vocations that is hitting many monasteries throughout Greece. However, when I visited, I was warmly invited into the katholikon by one of the monks, who quickly realised I was a priest, and asked me which Church I was from and who was my bishop. He pointed out the icons, the patriarch’s throne, and other treasures in the Church. He told me the story of the Cross, put on his stole, took the Cross out of its shrine, and blessed me before I went on my way. 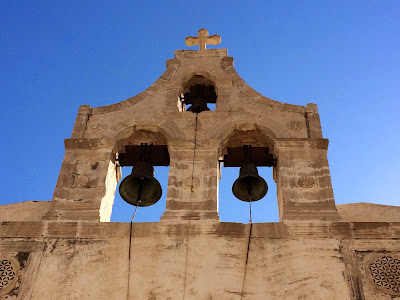 The bell tower at the west end of the katholikon (Photograph: Patrick Comerford)

18 Now when Jesus saw great crowds around him, he gave orders to go over to the other side. 19 A scribe then approached and said, ‘Teacher, I will follow you wherever you go.’ 20 And Jesus said to him, ‘Foxes have holes, and birds of the air have nests; but the Son of Man has nowhere to lay his head.’ 21 Another of his disciples said to him, ‘Lord, first let me go and bury my father.’ 22 But Jesus said to him, ‘Follow me, and let the dead bury their own dead.’ 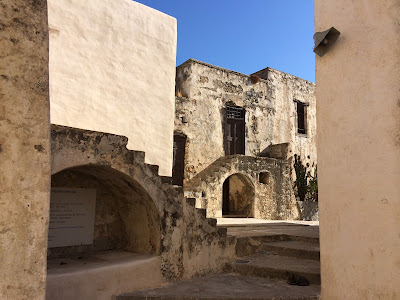 Let us pray for the Diocese of the Seychelles as they celebrate the anniversary of their independence. 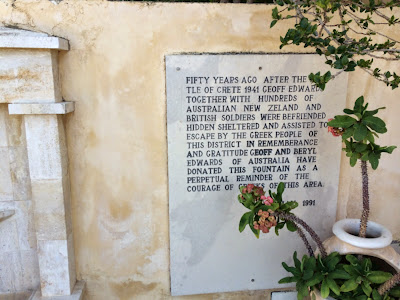 Tablets in the monastery courtyard tell of the rescue of allied troops by the monks of Preveli 80 years ago (Photograph: Patrick Comerford)