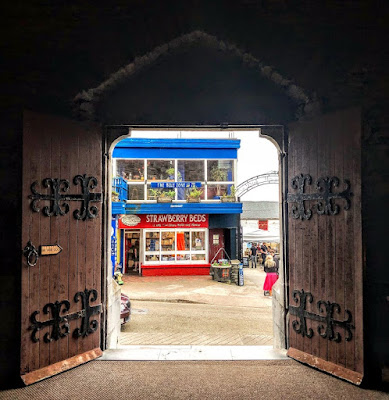 The church looking out into world and inviting the world into the Church … in the front porch of Saint Mary’s Church, Green Street, Dingle, Co Kerry (Photograph: Patrick Comerford, 2021)

There is colourful, much-photographed pair of gates beside a pub on Green Street, Dingle, that declares: ‘Where is Dick Mack’s? Opposite the Church? Where is the Church? Opposite Dick Mack’s.’

It is not difficult to find Saint Mary’s Church in the heart of Dingle, Co Kerry. It dominates the street corner, and is part of a larger site that includes the former Presentation Convent, the visitor centre, labyrinth and gardens of An Díseart and the planned new campus of Sacred Heart University.

This was built in 1862-1865 as a neo-Gothic church to designs by JJ McCarthy, who has assumed the Irish mantle of AWN Pugin. But a century later it was at the heart of one of the great controversies in Irish architecture when it saw one of the most radical reordering schemes carried out in any church in Ireland 100 years later in 1963. 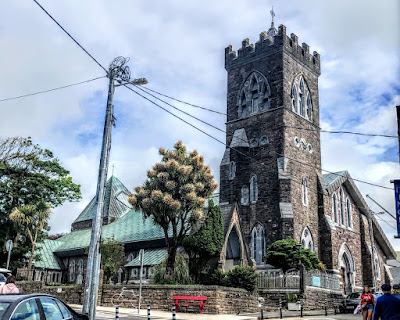 The church was built in large part thanks to the generosity of a local woman, Clarissa Hussey, who donated £3,000 towards the building costs. She was a ‘most bountiful benefactress,’ who died on 14 August 1864, ‘aged over 80 years,’ according to a memorial plaque inside the church.

A plaque in the church porch recalls Father Michael Devine, the parish priest of Dingle who died in 1849 ‘having inhaled the poison of death in administering the consolations of religion to the plague-stricken members of his flock, during the cholera’ epidemic in Dingle that year.

The foundation stone of the church was laid on Saint Patrick’s Day 1862. Because of the shape of the site, the church is oriented from the north-west to the south-east, rather than on the traditional, liturgical east-west axis. 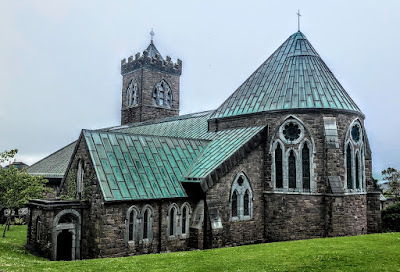 The church originally had a nave and side aisles, separated by arcades, supported by columns, and capped by octagonal tops. 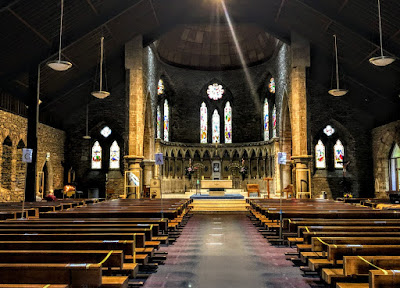 There are random red sandstone walls with grey limestone dressings. The windows are paired lancets with limestone ashlar surrounds and hood mouldings.

There is a pointed arch to the doorway, a square-headed opening with quatrefoil in the tympanum, flanking pilasters and double-leaf boarded doors with decorative strap hinges.

There is a carved stone arcaded reredos with trefoil arches. The graveyard has gravestones dating from ca 1865 to the present.

In what is seen as one of the most radical reordering schemes carried out in any church in Ireland in the wake of the liturgical reforms after Vatican II, the interior was largely remodelled in 1963.

The plaster was stripped off the rubble walls and the roof profile altered with exposed beams on timber posts. The remaining arches at the transepts have ashlar voussoirs and columns.

The exterior walls were demolished to below the original clerestory level, and, most notably, to the attic and upper ranges of the west elevation.

The church was reroofed, and now has pitched copper sheet roofs with a rooflight along ridge of the nave, a pyramidal roof above the chancel, a slate roof on the tower and stepped coping.

It may have been at this time that the limestone steps at the front were extended in concrete at either side. But on these summer evenings, tourists and visitors sit on the steps, enjoying the late sunshine, eating from the Fishbox and other shops across the street and enjoying takeaway drinks from Dick Mack’s. 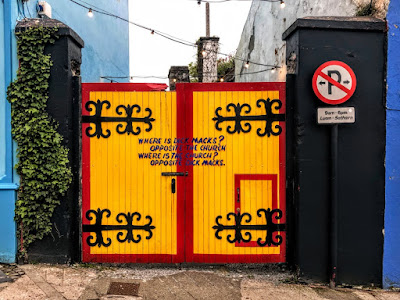