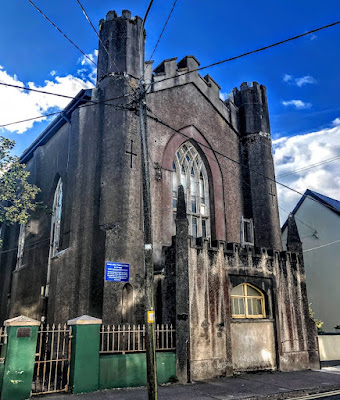 The former chapel of easte at South Abbey stands on the site of a 13th-century Franciscan Friary in Youghal, Co Cork (Photograph: Patrick Comerford, 2021)

For much of the 19th century, the Church of Ireland parish in Youghal, Co Cork, had not just one but two churches. During my ‘road trip’ visit to Youghal last week, as well as visiting Saint Mary’s Collegiate Church, I also visited the former chapel of ease at South Abbey, which later served as a parish school.

South Abbey and the street it fronts take their name from South Abbey, a 13th-century Franciscan Friary in Youghal.

The Franciscan Friary or South Abbey was founded in 1224 by Maurice FitzMaurice FitzGerald, 2nd Lord of Offaly, and he was buried there in 1257. This was the first Franciscan foundation in Ireland.

Originally, Maurice FitzGerald planned a castle on the site. But, after some of the workers were treated harshly by his eldest son, he changed his design and founded a religious house.

Maurice FitzGerald died in 1257, and the Franciscan friary was completed in 1260 by his youngest son, Thomas. His grandson, Thomas FitzGerald, ancestor of the Earls of Kildare, founded the Dominican Priory or North Abbey.

The Franciscan Friary in Youghal was dissolved, along with other monastic houses, during the Tudor Reformation in the 16th century and none of its remains survive today. 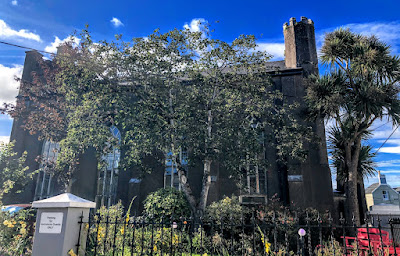 The church at South Abbey, built in 1817, was designed by the priest-architect Edward Marks (Photograph: Patrick Comerford, 2021)

The Church of Ireland parish in Youghal built a new church at South Abbey as a chapel of ease in 1817. The church built at a cost of £1,200, of which £900 was a gift from the Board of First Fruits and £300 was raised by subscription. The Duke of Devonshire, who lived at Lismore Castle, gave £100.

The internal dimensions were 18 x 9 metres. In addition, there was a bell tower and a porch. The staircase and upper floor were insterted at a later date when the church was converted for use as parish school.

The church was designed by the Revd Dr Edward Marks (1791-1869), an architect who was later ordained a priest in the Church of Ireland.

Edward Marks, a son of the architect Edward Marks, was born in Cork in 1792, and studied at the Dublin Society’s School of Architectural Drawing from 1812.

Marks married Martha Hammett of Waterford in Saint Patrick’s Church, Waterford, in 1815 and the couple lived in Waterford. Martha died in Waterford at the age of 23 on 4 December 1817, 18 months after their marriage, having given birth to a son, (Dr) Alexander Hammett Marks.

Edward Marks had designed the chapel of ease at South Abbey that year. He remained in Waterford for a time after Martha’s death. While he was still living in Waterford, he designed a school and schoolmaster’s apartments in Lismore in 1819 for Colonel Currey.

He was ordained in the Diocese of Raphoe in 1825, and returned to Dublin, first as curate of Sandford Parish (1830), Assistant Chaplain of the Molyneux Asylum (1835), and then as Resident Preacher and a Minor Canon in Saint Patrick’s Cathedral, Dublin (1837) and a Vicar Choral (1839).

He died on 7 May 1869 at the age of 77; his second wife, Joyce Anne, died on 27 April 1872. His memorial tablet in Saint Patrick’s says he ‘laboured zealously and faithfully in this Cathedral and Deanery upwards of 32 years.’ During that time, ‘the Schools, especially the Infant School which he established, were the first and constant object of his fostering care.’ 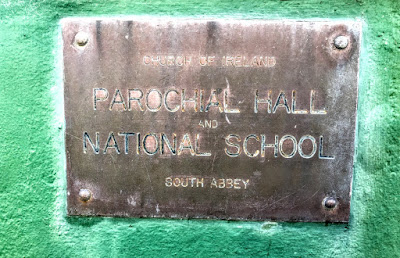 The chapel of ease at South Abbey became a school and parish hall in 1888 (Photograph: Patrick Comerford, 2021)

The chapel of ease at South Abbey continued in use until 1888, when it became a school on the ground floor, with a parish hall above level. It continued to function as a school and parish hall until 2011.

This is a listed property fronting directly onto the street at South Abbey, and it continues to make a notable impression on the streetscape of Youghal. Its gothic style is typical of churches of the time. The architectural features include the pointed arch openings, the centralised parapet, the towers and the porch.

There are elements of Neo-Tudor style too in the four-centred arch opening and square headed surround and in the cruciform incisions. The design is emphasised by the dividing buttresses at the nave and symmetrical façade. The Y-tracery in the windows adds decorative interest to the façade and is well crafted. 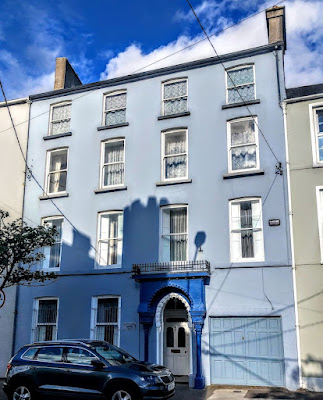 The former church faces a terrace of elegant Georgian houses on South Abbey, including the house at No 7, known as South Abbey House. The terrace was built ca 1780, and the most striking feature of No 7 is the large, finely crafted and unusual door surround.

South Abbey House is a terraced four-bay four-storey house with an integral carriage and this striking door surround was added in the late 19th century. It provides a central focus and decorative emphasis to a building of regular proportions and simple elegance.

This pointed arch opening has a decorative render surround incorporating engaged columns, a timber panelled door and a render canopy supported by columns with decorative capitals, and a round-headed arch with a decorative surround and cornice.

The diminishing windows of the house are typical features of townhouses of its time and emphasise the vertical thrust and elegance of the façade.

As for the South Abbey national school, it moved in 2011 to a new premises on the Golf Links Road, leaving the old school empty. 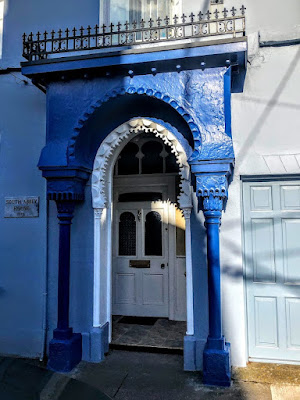