Clare Abbey was once
the largest Augustinian
monastery in Co Clare Clare Abbey, outside Ennis, was founded in 1189 and was once the largest Augustinian monastery in Co Clare (Photograph: Patrick Comerford, 2021)

The ruins of Clare Abbey are just south of Ennis in Co Clare, on the west bank of the River Fergus. But, although Clare Abbey is clearly visible from the N85, the sign on the roundabout at the junction of the N85 and the R458 near Clarecastle is difficult to notice and to follow.

At one stage during one of last month’s ‘road trips,’ as we diverted to find Clare Abbey, two of us thought we had come to the end of the one-track side road, at another stage we wondered what to do if we faced any on-coming traffic, and we then thought we were being brought back onto the N85, before eventually finding the abbey ruins.

Clare Abbey was once the largest and most important Augustinian house in Co Clare. Originally known as the Abbey of Saint Peter and Saint Paul at Kilmony, it was founded in 1189 with a charter from Donal Mór O’Brien, King of Thomond. As with many mediaeval sources, however, there are doubts over the authenticity of the charter as it only survives in a copy from 1461, when the charter was probably been forged.

He was a descendant of Brian Boru and submitted to Henry II in 1171. He successfully fought off Norman incursions after his submission, driving them out of Limerick in 1178, and defeating them again in 1185 and 1188. At the same time, he was embroiled in a fight within his own family and against other Irish families to consolidate his power.

Despite Donal Mór’s efforts to secure his lands against Norman expansion, parts of his lands were granted to Anglo-Norman lords. But a Norman settlement a mile south of the abbey was short-lived, and by 1270 the O’Briens had taken over Clare Castle and destroyed the settlement. 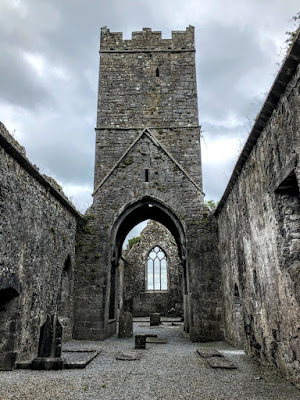 Facing east in the abbey church at Clare Abbey … the nave and chancel are separated by the belfry tower added in the 15th century (Photograph: Patrick Comerford, 2021)

The Canons Regular came to Ireland from Italy and followed the Rule of Saint Augustine. Their primary focus was parish work and the care of souls. They lived simply, adapted easily to Irish medieval life, and their numbers continued to grow so that by the 13th century they were the largest order in Ireland.

The name Kimony (‘the Church on the Bog’) in mediaeval documents suggests Clare Abbey was built on the site of an earlier church. The only remains of an older structure are possibly the bullaun in a block of granite and a stone carving over one of the abbey windows. 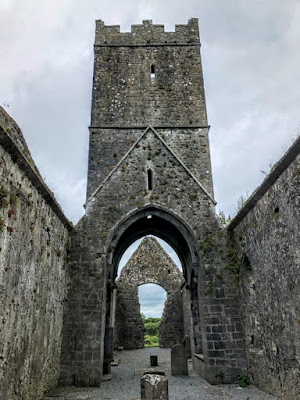 Facing west in the abbey church … the west window had collapsed by 1680 (Photograph: Patrick Comerford, 2021)

The moastery was built on a strip of land extending out into the flood plain of the River Fergus. However, its position in O’Brien territory on the River Fergus and its extensive possessions made it one of the most important monasteries in the Diocese of Killaloe.

The antiquarian and archaeologist, Thomas Johnson Westropp, writing in 1900, describes the exposed site of the abbey in a grassland area, surrounded by marshy land prone to flooding by the River Fergus. He suggests the site was chosen because it was a sacred site or the site of an earlier church.

Pope Honorius III issued a papal letter in 1226 against Robert Travers, who was accused of being appointed Bishop of Killaloe through simony.

Clare Abbey was the site of a battle in 1278 between Toirdhealbhach Mór Ó Briain and Thomas de Clare. Donal Beg O’Brien ambushed and massacred Mahon O’Brien and his followers, who had billeted themselves at Clare Abbey, as they were making a hasty retreat. 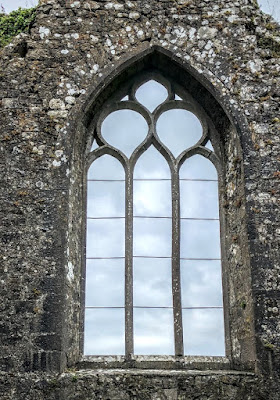 The east window is a pointed three-light dating from the 15th century (Photograph: Patrick Comerford, 2021)

The two leading clans in Co Clare, the O’Briens and the MacNamaras, changed their family burial places to Ennis Friary and Quin Abbey in the 13th century. Within a few years, most of the local chieftains had abandoned the Augustinian monasteries and the monastic buildings fell into disrepair.

Donatus Mac Craith became Bishop of Killaloe in 1399, and Clare Abbey came under the control of the Mac Craith family in the century that followed. At least five members of the family were elected abbots, some of them becoming Bishops of Killaloe or Clonfert.

In 1458, Matthew Mac Craith succeeded his father, Roderick Mac Craith, as abbot. He later became Bishop of Clonfert, but remained Abbot of Clare until 1470.

However, control over the abbey seems to have shifted to the O’Briens again towards the end of the 15th century: Toirdelbach O’Brien was chosen as abbot in 1473. Despite a formal complaint to the pope from Matthew Mac Craith, former abbot and Bishop of Clonfert, a papal investigation later decides in favour of the O’Briens. 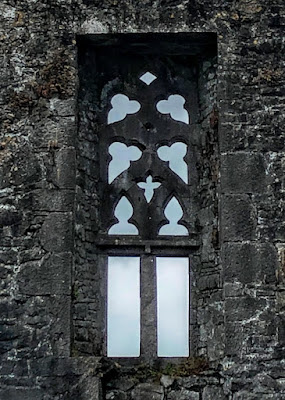 An elaborate design in the south gable of the east range (Photograph: Patrick Comerford, 2021)

At the dissolution of the monastic houses during the Tudor Reformation, Clare Abbey was dissolved in 1543, and the site and possessions were granted to Donough O’Brien, 2nd Earl of Thomond, also known as Donough Ramhar or ‘Fat Donough.’

The monks may have continued to live at Clare Abbey, and a papal bull was issued in 1555 to Matthew Ο’Griffa, canon of Killaloe, in order to assist the Bishop of Killaloe, Turlough O’Brien, in implementing papal ordinances on the administration of Clare Abbey. It admonished various clerics and laymen for their inadequate management, including financial mismanagement.

Clare Abbey was regranted to Conor O’Brien, 3rd Earl of Thomond, in 1573, and the abbey buildings were leased to various families during the 17th century.

Nicholas O’Nelan, Abbot of Clare Abbey, is given in the list of monks living in the Diocese of Killaloe in 1613, and Teige O’Griffa, a priest, officiated at Dromcliff, Killone, and Clare Abbey in 1622. However, the abbots named in the 17th century were probably titular abbots.

A sketch by Thomas Dyneley in 1681 shows that the abbey’s kitchen, in the south range, had been converted to a house. Other evidence points out to possible military use of the abbey during the wars of the late 17th century.

There was a Jacobite horse camp there, primarily Irish cavalry and dragoons, in 1690-1691, while a Jacobite Irish garrison occupied Clare Castle about 1 km to the south, and French officers and cavalry were in the location too. 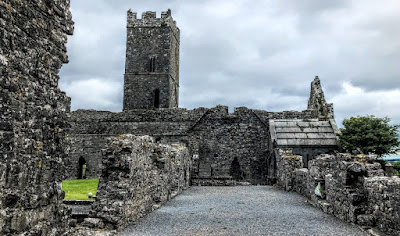 Clare Abbey was confirmed to successive Earls of Thomond in the 17th century (Photograph: Patrick Comerford, 2021)

The remains of Clare Abbey are extensive and while the architecture is simple, its setting and some notable features make it worth visiting – and worth persisting in searching for, despite the poor road signage and the misleading appearance of the narrow access route.

The remains include a church with a belfry, and two ranges of domestic buildings to the east and the south, around a cloister garth. Clare Abbey was unusual among an Augustinian monastery in having no west range.

The single-aisle church dates from the late 12th century and consists of a long nave and chancel, separated by the belfry tower added in the 15th century. The church was originally 39 metres (128 ft) long and about 9.4 metres (31 ft) wide. Important architectural features include three 15th-century traceried windows. Two are in the chancel, and include the east window, which is a pointed three-light with a small carving of a human face above the hood. The west window had collapsed by 1680.

The other buildings date from the 15th century. In the south gable of the east range, above the original window, an elaborate design of cusped tracery consisting of six trefoils and a quatrefoil was inserted, framed in a richly moulded projecting hood.

When Westropp visited Clare Abbey at the end of the 19th century, he noted that the belfry had no staircase and a large tomb with no inscription in the north recess under the tower. He described the low and badly proportioned battlements of the tower, and how many loose stones were visible and were reset and repaired. The east window was well-preserved, and the ruins included the tower and domestic buildings and one incised post-Norman cross. The oldest tombs then legible dated from the 17th century.

The original dedication of Clare Abbey is retained in Ennis Cathedral, which was dedicated to Saint Peter and Saint Paul by Peter Kennedy, Bishop of Killaloe (1836-1850), on 26 February 1843. 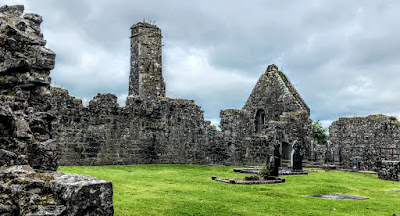 Clare Abbey was dissolved in 1543 at the dissolution of the monastic houses (Photograph: Patrick Comerford, 2021)