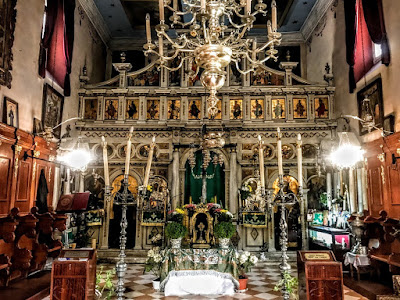 Inside the Church of Saint Eleftherios and Saint Anna … a quiet and prayerful church on a busy shopping street in Corfu (Photograph: Patrick Comerford)

This week’s theme is seven churches on the Greek island of Corfu, and my photographs this morning (3 August 2021) are of the Church of Saint Eleftherios and Saint Anna in Corfu. 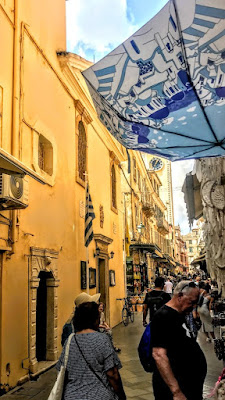 Like every Greek town, Corfu seems to have a church on every street and every corner, making it an interesting town for church crawlers and all who are interested in church architecture, history and art.

But it is easy for visitors and tourists to pass by these churches casually without realising the treasures to be discovered inside.

The Church of Saint Eleftherios and Saint Anna is an unusual single-nave church on Saint Spyridon Street in the heart of Corfu town. It was built in 1700 and restored in 1765. It is smaller and less known that its immediate neighbour, the Church of Saint Spyridon, but this makes its more peaceful and prayerful, and Olga who showed two of us around was eager to point out the treasures of the church, including its relics and icons. 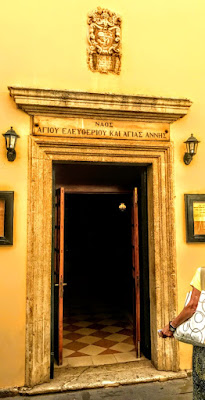 A plaque above the main door recalls that the church was built by Theodora Vervitzioti in 1700 (Photograph: Patrick Comerford)

34 When they had crossed over, they came to land at Gennesaret. 35 After the people of that place recognized him, they sent word throughout the region and brought all who were sick to him, 36 and begged him that they might touch even the fringe of his cloak; and all who touched it were healed. 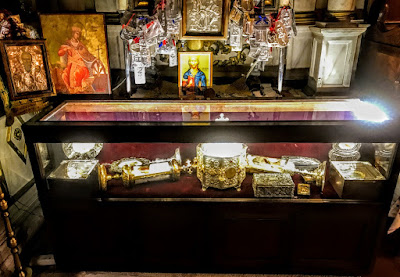 The collected relics in the church are held in one display case (Photograph: Patrick Comerford)

The Prayer in the USPG Prayer Diary today (3 August 2021) invites us to pray:

‘Let the little children come to me,’ Jesus said. We pray that the Church may always be open to welcoming young people and helping them to understand the importance of peace. 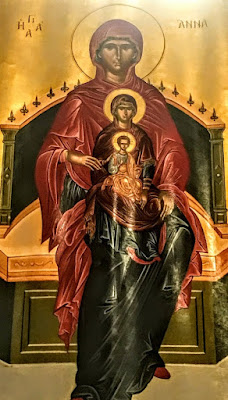 The icon of Saint Anne, with her daughter the Virgin Mary holding her son the Christ Child (Photograph: Patrick Comerford) 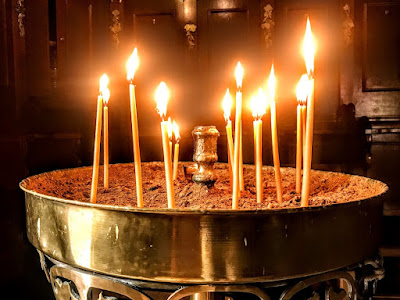