Praying in Ordinary Time 2021:
67, the Chapel, the Achilleion Palace 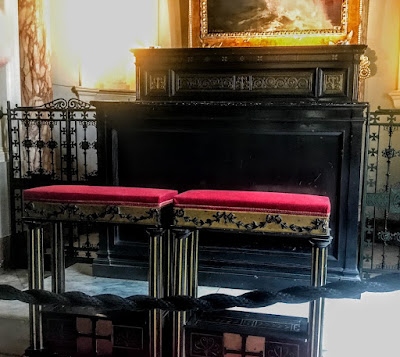 Inside the chapel in the Achilleion Palace, Corfu … built for ‘Sisi,’ the Austrian Empress Elisabeth, after the tragedy at Mayerling in 1889 (Photograph: Patrick Comerford)

I am working on the final details of my address as President of the Irish Campaign for Nuclear Disarmament (Irish CND) at Friday’s Hiroshima Day commemorations in Merrion Square, Dublin. But, before the day gets busy, I am taking a little time this morning for prayer, reflection and reading.

This week’s theme is seven churches on the Greek island of Corfu, and my photographs this morning (4 August 2021) are of the chapel in the Achilleion Palace, south of Corfu city. 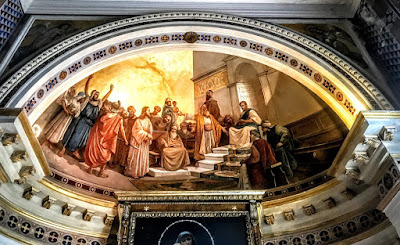 The large painting in the apse of the chapel in the Achilleion Palace depicts the trial of Christ (Photograph: Patrick Comerford)

The Achilleion Palace in Gastouri, 10 km south of Corfu city, was built for ‘Sisi,’ the Austrian Empress Elisabeth, at the suggestion of the Austrian consul, Alexander von Warsberg. She was deeply saddened by the death of her only son, Crown Prince Rudolf of Austria, at Mayerling in 1889, and she had this summer palace built as a refuge a year later.

Achilleion provides a panoramic view of the city to the north, and across the southern part of the island and the Ionian Sea. The architectural style of the palace is said to have been inspired by the mythical palace of Phaeacia, and the motif centres on the myth of Achilles.

This Roman Catholic chapel is a work of art in itself. While the rest of the palace was inspired by classical Greek culture, the chapel was decorated in the Baroque style.

None of the owners of the palace after the Empress was a Roman Catholic, so the chapel may never have served its original purpose after 1907. But through the Achilleion Palace the Empress Elisabeth influenced style and taste throughout Greece at the turn of the 19th and 20th centuries. 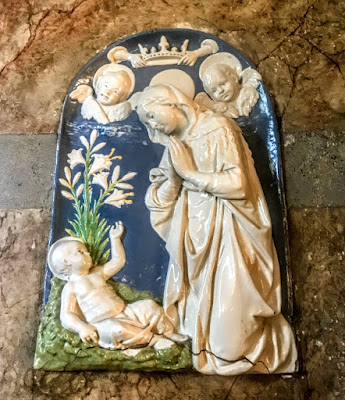 The walls in Sisi’s chapel are decorated with paintings and images of the Virgin Mary and saints (Photograph: Patrick Comerford)

21 Jesus left that place and went away to the district of Tyre and Sidon. 22 Just then a Canaanite woman from that region came out and started shouting, ‘Have mercy on me, Lord, Son of David; my daughter is tormented by a demon.’ 23 But he did not answer her at all. And his disciples came and urged him, saying, ‘Send her away, for she keeps shouting after us.’ 24 He answered, ‘I was sent only to the lost sheep of the house of Israel.’ 25But she came and knelt before him, saying, ‘Lord, help me.’ 26 He answered, ‘It is not fair to take the children’s food and throw it to the dogs.’ 27 She said, ‘Yes, Lord, yet even the dogs eat the crumbs that fall from their masters’ table.’ 28 Then Jesus answered her, ‘Woman, great is your faith! Let it be done for you as you wish.’ And her daughter was healed instantly. 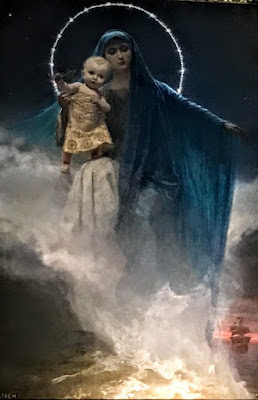 A painting of the Virgin Mary with the Christ Child above the seas (Photograph: Patrick Comerford)

The Prayer in the USPG Prayer Diary today (4 August 2021) invites us to pray:

May we remember the tragedy of the bombing of Hiroshima. Let it remind us of the devastating impact of nuclear weapons, and strengthen our resolve to work towards a world free of such weapons.br />
Yesterday’s reflection 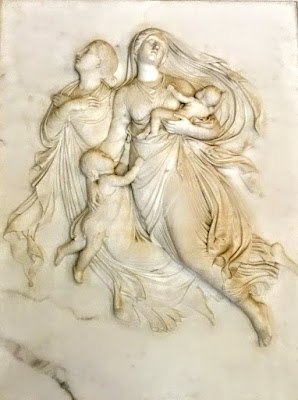 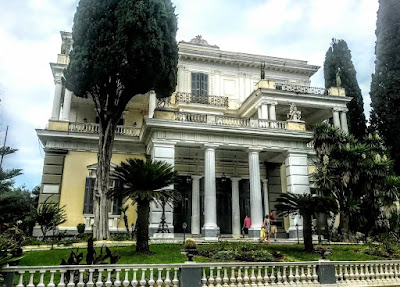 The Achilleion Palace in Gastouri, 10 km south of Corfu city, influenced style and taste throughout Greece at the turn of the 19th and 20th centuries (Photograph: Patrick Comerford)