The Greeks have a word
for it (27) Diaspora 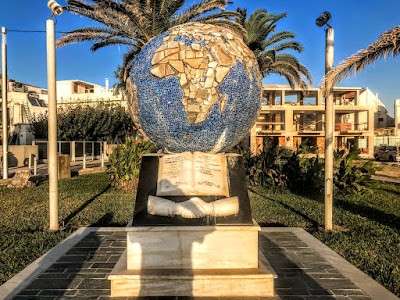 Hands across the globe … a sculpture beneath the Fortezza in Rethymnon (Photograph: Patrick Comerford, 2021)

Greeks people are as conscious of the Greek Diaspora as Irish people are of the Irish Diaspora.

The term is derived from the Greek verb διασπείρω (diaspeirō), ‘I scatter’ or ‘I spread about,’ which in turn is composed of διά (dia), ‘between, through, across’ and the verb σπείρω (speirō), ‘I sow, I scatter.’

A diaspora is a dispersed or scattered population whose origin lies in another geographic locale, separate from its indigenous territories, and the word diaspora refers to the mass dispersion of a population. It is generally used to describe a people who identify with a ‘homeland’ but who live outside it.

But, as today (16 September) has been Yom Kippur, the most solemn day in the Jewish calendar, I was reminded too that the word was first used specifically to describe the dispersion of Jews.

In Ancient Greece, the term διασπορά (diaspora) meant ‘scattering’ and was often used to refer to citizens of a dominant city-state who emigrated to a conquered land to colonise it and to assimilate the territory into the empire.

The use of the word developed, however, when the Hebrew Bible was translated into Greek. The first references to a diaspora created as a result of exile is found in the Septuagint.

After the Septuagint translation of the Bible into Greek, the word diaspora was used to refer to the Northern Kingdom, exiled between 740 and 722 BCE from by the Assyrians, as well as the people exiled from the Southern Kingdom in 587 BCE by the Babylonians, and the people exiled from Roman Judea in 70 AD by the Roman Empire. The word came to be used to refer to the historical movements and settlement patterns of the dispersed Jewish people, as in the Jewish Diaspora.

Diasporic communities in any language or cultural group often share similar patterns of collective behaviour, such as resistance to language change and the maintenance of traditional religious practices.

The Greek diaspora is one of the oldest and largest in the world, going back to Homeric times. The trading and colonising activities of the Greek tribes from the Balkans and Asia Minor brought Greek culture, language and people around the Mediterranean and Black Sea, with Greek city states and colonies developing in Magna Graecia, which included Sicily and southern Italy, and north Libya, east Spain, the south of France, and the Black Sea coasts.

The conquests of Alexander the Great brought a new wave of Greek colonisation to Asia and Africa, with Greek rule being found in Egypt, south-west Asia and north-west India. In time, the Greek diaspora became one of the most long-standing and widespread in the world.

Greek exiles played key roles in the emergence of the Renaissance, in the liberation and nationalist movements that brought about the fall of the Ottoman Empire, and developing the world’s great shipping lines. New migration in the past century brought large Greek communities to the US and Australia. Estimates for the Greek diaspora today range from three million to seven million worldwide. 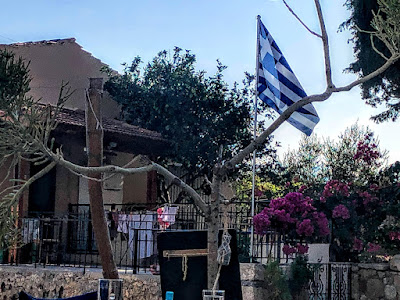