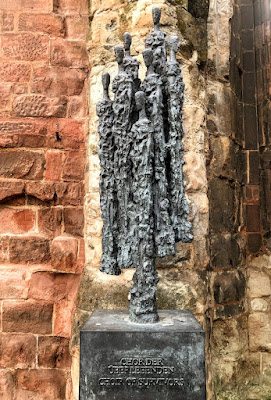 The ‘Choir of Survivors’ by Helmut Heinze, in the ruins of Coventry Cathedral, is a gift from the Frauenkirche Foundation in Dresden. The Frauenkirche church in Drseden was destroyed by allied bombing during World War II.

The 2.77 metre sculpture, known in German as Chor der Überlebenden (Choir of Survivors), is in memory of the lost civilian lives on both sides of the conflict during World War II. It was unveiled at the west end of the cathedral ruins on Sunday 20 May 2012 as part of the new cathedral’s fiftieth anniversary celebrations.

The ‘Choir of Survivors’ is dedicated to civilians killed or injured in aerial bombing during wars past and present. During the act of dedication, specific reference was made to German civilians killed in the allied bombings in 1940-1945. A delegation and choir from the bombed German city of Dresden, led by the Bishop of Saxony, took part in the ceremony.

Bishop Christopher Cocksworth of Coventry said at the unveiling that this was a ‘very significant sculpture.’ He described it as ‘a symbol of hope; of new life rising out of destruction.’

The statue is the work of the German artist and sculptor Helmut Heinze, who was born on 24 April 1932. He also designed a memorial for the victims of the Bombing of Dresden in World War II.

Heinze interrupted his studies in 1953-1955 for a stone sculptor apprenticeship under Werner Hempel. During this time, Heinze took part in restoring the Dresden Kreuzkirche and Meissen Cathedral. He was professor for plastic arts at the Dresden Academy of Fine Arts from 1979 to 1997.