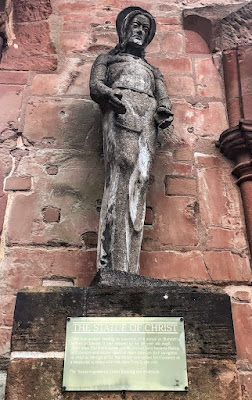 ‘Statue of Christ’ by Alain John in the ruins of the Old Coventry Cathedral (Photograph: Patrick Comerford, 2021)

The Statue of Christ is a second casting, in concrete, of a statue at Blundell’s School in Devon. It was created by an 18-year-old pupil, Alain John, and represents Christ blessing the multitude.

Alain John (1920-1943) was an aspiring sculptor of Armenian descent. His family were Armenian merchants who had migrated from New Julfa, Persia, to settle in Calcutta, India, where he was born in 1920.

He was educated at Blundell’s School in Tiverton and had passed the entrance to King’s College, Cambridge, in 1938 and was told he could travel abroad until term started. Instead, he chose to return to Blundell’s School for a term to model a statue for an empty niche in the school tower.

As his theme, he finally chose Christ in Blessing. Eric Gill, then a master at the school, said of the clay model, ‘No finer piece of work has been done by anyone in this country this year.’ The original statue remains in place.

At the outbreak of World War II, Alain John enlisted in the Royal Air Force. He preferred to fly with friends as a navigator sergeant rather than seeking a commission. He undertook a long series of night flights over Germany and died on 23 December 1943 at the age of 23 from injuries sustained on a mission.

The headmaster of Blundell’s School, Neville Gorton, became Bishop of Coventry shortly before Alain John died in 1943. Bishop Gorton wrote to The Times on 29 December 1943 to propose that John’s statue be recast as an Air Force Memorial. Commenting on the statue, he said, ‘It is a moving work of faith and tenderness, and of the quality in its faith and its art Eric Gill’s judgement stands.’

The statue was recast n Bishop Gorton’s commission and now stands in the ruins of the old Coventry Cathedral as a memorial to all who lost their lives in the war.

Neville Vincent Gorton (1888-1955) was the fourth Bishop of Coventry. He was born on 1 March 1888, the son of Canon CV Gorton, and was educated at Marlborough College and Balliol College, Oxford.

Gorton was a career schoolmaster who after ordination he spent 20 years at Sedbergh School. He was a housemaster of Sedbergh when he was appointed head of Blundell’s School, where he was to remain until the call to face the challenges of a severely bombed diocese.

A passionate advocate of Christian Unity, Gorton’s vision was for a ‘People’s Cathedral’ in Coventry. He died in office on 30 November 1955 aged 67, and is buried in the ruins of Coventry Cathedral.