How Trinity Church died and
found new life, as a church,
in inner city Dublin 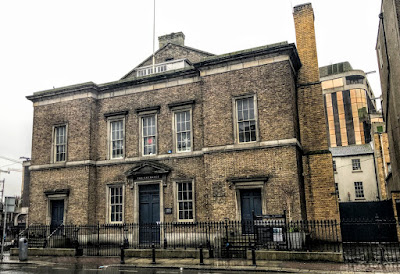 Alone among these three, Trinity Church is in use once again as a church.

Trinity Church at the south end of Gardiner Street began life as the Protestant Episcopal Church in 1838, and closed in 1916. For many years it was an unemployment or labour exchange, but it was opened once again in the 2000s by an independent Christian group using the name as Trinity Church.

Trinity Church was designed by Frederick Darley, who designed many buildings in Trinity College Dublin, and the church would have accommodated up to 1,800 people.

The story of the church begins with the Revd John Gregg (1798-1878), a charismatic and controversial preacher who attracted the funds and the congregation to support building a church that was independent of the parish structures in the Church of Ireland.

John Gregg was born on 4 August 1798 near Ennis, Co Clare, the son of Richard Gregg, a landowner, and educated at Trinity College Dublin. He was ordained deacon and priest in 1826 and 1827, and he soon gained a reputation as an eloquent preacher, fluent in the Irish Language. He was Bishop of Cork when he died on 26 May 1878.

Darley was a son of the builder and architect Frederick Darley Senior, who was Lord Mayor of Dublin in 1808-1809. His mother, Elizabeth (Guinness), was the eldest daughter of Arthur Guinness of Beaumont.

Frederick Darley junior was a pupil of Francis Johnston. He was the architect of the Ecclesiastical Commissioners for the Church of Ireland Diocese of Dublin in 1833-1843, and a founding member of the Royal Institute of the Architects of Ireland (RIAI).

During the 1830s, he was also architect to Trinity College Dublin, a position he held until at least 1850. As architect to the Board of National Education (1848-1856), he was responsible for designing a series of model schools and model agricultural schools throughout Ireland.

In addition, Darley was patron of Aged and Infirm Carpenters’ Asylum, advisory architect to the Dublin Exhibition Palace and Winter Gardens Company (1863-1870), and one of four architects involved in restoring Saint Patrick’s Cathedral, Dublin.

The first chaplain of Trinity Episcopal Church was the Revd John Gregg, from 1839 until he was appointed Bishop of Cork in 1862.

A wealthy Dublin businessman named Vance funded half the building costs on condition that Gregg could raise the other half of the money needed. It was a proprietary or trustee church, independently funded by wealthy laypeople. The term ‘Episcopal’ was used to distinguish it from other evangelical movements of the day that were outside the Church of Ireland.

A parochial district was assigned to Trinity Church in 1847 from Saint Thomas’s Parish. Those who attended church services included George Howard (1802-1864), 7th Earl of Carlisle, who was Lord Lieutenant of Ireland (1855-1858), and John Pentland Mahaffy, future provost of Trinity College Dublin.

Craig’s successor, the Revd John Olphert Gage Dougherty, was the last chaplain (1902-1904), and in 1904 the parish was joined to Saint Thomas’s as a mission church.

The original setting of the church has been compromised by the Loop Line railway bridge (1888-1889) which has blocked the view from the Custom House so that it is difficult to see the church in its context from a southern vantage point.

The church was closed in 1916, was later sold, and was used as a labour exchange from the 1920s. The galleried hall was probably removed in the 1920s and mid-20th century concrete reinforced columns now support the first floor.

A school was built to the rear of the church in the mid-19th century with similar detailing and materials. Both buildings retain many of the original ventilation measures, including their internal controls and the external vents, a particular preoccupation of Victorian construction.

The rendered accommodation block to the side was built at the same time as the church and retains its original windows at the rear laneway.

The former church was bought in 2006 by the Fellowship Bible Church, which reopened it as a church in the Trinity Church Network. The recent re-conversion from a labour exchange has restored the large space on the first floor that had been subdivided and this room retains its original cornice.

The large space to the top floor has had recent reinforcement of the original large spanning timber queen-post trusses and reversion to its original single space. The building retains a substantial amount of its original features and fenestration and its recent refurbishment has successfully maintained these characteristics.

Thank you Patrick for this fine piece on Trinity Church. After the major restoration (2006-2009) the original marble memorial with bust to John Gregg was erected in the entrance lobby, at my request, kindly facilitated by the nearby St Thomas’s, where it had been stored during the 20th century. Fellowship Bible Church was renamed Trinity Church Network in 2002, before the acquisition of the old Trinity Church in 2006, and the retention of the building’s name was a recognition of what is common and continuing in our historic orthodox creedal foundations. We also arranged for several historical panels on the stages of the building’s history, including a panel on John Gregg, whose first sermon at the church on 10 November 1839 was from 1 Corinthians 2:2: “For I determined not to know anything among you, save Jesus Christ, and him crucified.” An amusing note during the restoration concerned a charitable agency supporting the preservation of Victorian churches in the UK. At first they declined to make a contribution on the understandable grounds that the charity existed to help churches in the UK. But they made a generous contribution of £4,400 after I pointed out that Trinity Church had been built in the United Kingdom in 1839 and that it hadn’t moved since!

Thank you Patrick for this fine piece on Trinity Church Dublin. After the major restoration project (2006-2009) an original bust and memorial plaque to John Gregg was reerected in the new entrance lobby at my request, kindly facilitated by the nearby St Thomas’s, where it had lain in storage for almost a century. Fellowship Bible Church changed its name to Trinity Church Network in 2002, several years before acquisition of the old labour exchange, and so it was particularly apposite to restore the building’s original name of Trinity Church, not least as a recognition of the common foundations of our orthodox creedal symbols. Several new illustrated historical information panels were also placed around the building, including one on John Gregg, noting the text of his first sermon at Gardiner Street on 10 November 1839: “For I determined not to know any thing among you, save Jesus Christ, and him crucified.” An amusing note during the rebuilding concerned an application to a charity in Britain whose aim is the preservation of Victorian church buildings. The application was understandably declined on the grounds that the charity only supported churches in the UK. But a generous contribution was made after I pointed out that Trinity Church Dublin had been built in the United Kingdom in 1839 and that it hadn’t moved since! Unshakeable foundations have their benefits.