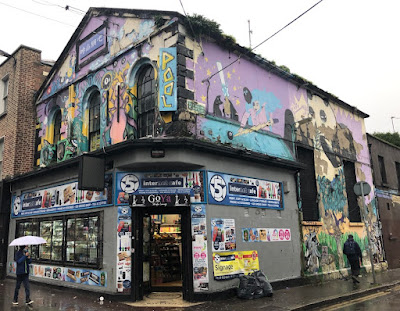 In inner city Dublin in the past week, I came across three churches that told the story of the cultural diversity of church life in Dublin for many generations.

Welsh chapels are not confined to Wales. I once received a warm welcome in Welsh chapel in Chester when I was in my teens, and I have since come across Welsh chapels and churches in London and Birmingham. But I was surprised to learn last week that there had been a Welsh chapel in Dublin from 1838 for more than a century.

For over a century, from 1838 to 1942, a Welsh chapel in Dublin, with services in the Welsh language, was a meeting place for sailors in Dublin port and a hub for Dublin’s resident Welsh community.

Before the chapel was built, religiously-motivated Welsh sea-captains, such as Israel Matthew from Holyhead and John Williams from Caer, went from ship to ship and pub to pub inviting Welsh seamen to prayer meetings on board ships in Dublin port. Then, a Welsh congregation began used the Dutch Lutheran chapel on Poolbeg Street, although all collections went to ‘the Dutch.’

The Calvinistic Methodists in North Wales, later known as the Presbyterian Church of Wales, decided in the 1830s, to build a chapel in Talbot Street, Dublin, close to junction with Lower Gardiner Street and close to the port. At first, it was mainly for visiting Welsh sailors, and it was hoped sailors from Holyhead would spend an hour in prayer and an hour less in the pubs.

The site for the chapel was secured by John Roberts, a Holyhead businessman, thanks mostly to the efforts of the first pastor, the Revd Robert Williams. The foundation stone of the chapel was laid in 1838, and the new church, named Bethel Church, was 40 ft x 27 ft, built of brick and cornerstone of Whitland granite from south-west Wales, at a cost of £500.

When the chapel opened in 1838, there were 18 registered city members, but it had a seating capacity of 300. Because it was so close to the docks of Dublin, visiting Welsh seamen could go to church there, finding opportunities to meet other people from Wales and to socialise in their own language.

The sailors mainly worked on merchant and passenger ships from Holyhead, but some also came from ships carrying slate from quarries in Penrhyn and Y Felinheli, beside the Menai Strait. By the mid-19th century, the chapel attracted not only Calvinistic Methodists but sailors from other denominations.

The congregation also drew from the 300 Welsh soldiers stationed in Dublin, patients coming on the boat from Holyhead for treatment at the Adelaide Hospital, and Welsh people who moved to Dublin to work as maids, nurses, and other professionals, or who found Trinity College Dublin was the nearest university to many parts of North Wales.

The services were conducted in the Welsh language and the chapel remained under Welsh supervision throughout its life. Ministers were normally sent from Wales, but at times when the chapel had no resident minister it relied on ministers sent for short periods or who travelled from Holyhead on Sundays to lead the service.

The chapel had become a focal point for the small Welsh community in Dublin, and numbers reached 77 by 1861. By then, the chapel was too small for the numbers attending, and a gallery was built over the chapel door in 1862, with additional seating for another 60 people.

The background of the sailors who went to church there was reflected in the customs in the chapel. The ground floor was referred to as the ‘Main Deck,’ and there the men sat on the ‘starboard side’ to the right and the women on the ‘port side’ to the left. The gallery was known as the ‘Quarter Deck’ and only sailors were allowed to sit there. At each end of the gallery were spittoons filled with sawdust so sailors could smoke or chew tobacco during the services.

In fact, only sailors were allowed on this quarterdeck. The story is told of a captain visiting with his wife is reported, but when tried to enter the gallery, she was told: ‘Main deck for you my girl!

The Revd Evan Lloyd was the chaplain of the ‘Welch Methodist Preaching House’ in 1862. He was a popular, although another city centre chaplain accused him on bring ‘the father of all the Welsh girls in Dublin.’

The chapel was linked to Anglesey from 1865 on. Further building work in 1894 was supported by donations from Methodists across Wales, a ‘Wesleyan nobleman,’ and a member of the Moravian Church, and ‘even received help from the Papists.’

In the 1901 Census, the chaplain, the Revd John Lewis (42), and living at 77 Talbot St with his wife Elizabeth and their son Alun (1). Later, the Lewis family lived behind the church in Moland Place. Lewis was known to Dubliners as the ‘Welsh bishop,’ and wore a wide, flat hat on his missions around the city. The hat reportedly took a bullet in the Civil War.

Members of the chapel came from all social classes. Clerks, domestic servants, sailors, hotel-owners and tailors featured in its records. For example, the chapel members in 1914 included the housekeeper, housemaid, parlourmaid and cook employed by Sir John Purser Griffith (1848-1938), a senior civil engineer and politician, at his home in Rathmines Castle. Almost all these servants were from Anglesey, like their employer. Purser Griffith did not belong to the chapel but he gave it substantial funds.

The housekeeper at Rathmines Castle, Caernarvon-born Mary Parry, married the Revd Owen Selwyn Jones, a widower and Minister of the Gospel with an address at Llanrhos, North Wales. The wedding took place in the Welsh chapel in 1916 and the witnesses were John Lloyd-Jones, who was Professor of Welsh in University College Dublin, and Elizabeth Roberts, the parlourmaid at Rathmines Castle.

Ernest Blythe (1889-1975), the Minister for Finance (1923-1932) and later managing director of the Abbey Theatre (1941-1967), also had an interest in the Welsh language. Blythe was born into a Church of Ireland and Unionist family near Lisburn, and also became a key figure in the Blueshirts and other pro-fascist and antisemitic organisations.

When Blythe joined the Gaelic League to learn Irish, another member told him of the Welsh community in Dublin with its own church and services in the Welsh language. ‘I went there one Sunday morning to revel in the sound of a language closely related to Irish,’ he later recalled. To improve his knowledge of the Welsh language, Blythe occasionally attended the chapel and took Welsh classes in the 1930s from the minister, the Revd John Lewis.

Chapel membership declined during World War I and fell again after Irish independence. The church may have been damaged during the Irish War of Independence. There was an explosion outside Moran’s Hotel in July 1922, and several houses and businesses on the street claimed compensation. The many claims in the area at the time include one from William Griffith, a boot merchant next door at 78 Talbot Street.

After Lewis retired, visiting ministers came from Anglesey to conduct services in the chapel in Dublin. The last service was held in 1939, before the outbreak of World War II made the crossing between North Wales and Dublin too difficult.

In June 1944, the Irish Independent reported that ‘a regrettable break in the few remaining links binding the Irish people with their fellow Celts, the Welsh, will follow on the closing down of the Welsh Church, Talbot Street. This church, the only one of its kind in the country, will be offered for sale on June 20.’

Professor John Lloyd-Jones said that when the chapel closed ‘the heart of the Welsh community in Dublin had been taken out’. Howell Evans wrote in 1981 that ‘looking back … had there been no Welsh Church I would have lost my language and Welsh interest.’

Today the former chapel is a brightly-coloured ‘Five Star Internet Café,’ with a pool room upstairs. The building is covered with graffiti, but the outline of the original chapel can be seen on the Talbot Street façade. Inside, computers and telephones on the ground floor and pool tables upstairs hide the previous life of this former chapel.

Following a campaign by the Welsh Society in Ireland, the building now has protected status and there are plans to erect a plaque on the site. 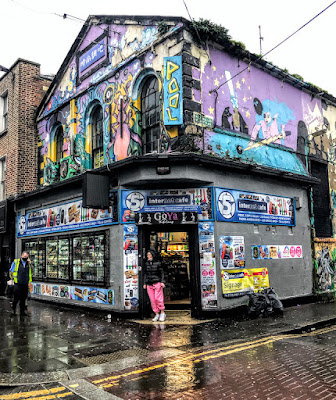