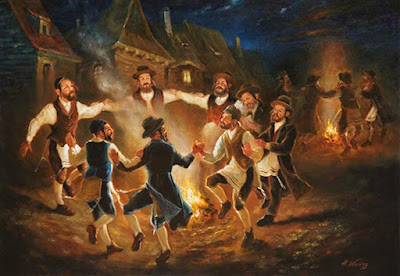 Lag BaOmer or Lag B’Omer (לַ״ג בָּעוֹמֶר‎) began on Wednesday night (18 May 2022) and came to end at sunset last night (19 April 2021). This is a Jewish religious holiday celebrated on the 33rd day of the Counting of the Omer, and it occurs on the 18th day of the Hebrew month of Iyar.

This minor Jewish holiday – known for bonfires, weddings and haircuts – takes place about a month after Passover. This is a break from the semi-mourning of the Omer, and key aspects of Lag BaOmer include holding Jewish weddings – it is the one day during the Omer when Jewish law permits them – lighting bonfires, and the pilgrimage to the tomb of Rabbi Shimon bar Yochai in Meron, which is marked by all-night prayer, mystical songs and dance.

According to some traditions, this day marks the hillula or anniversary of the death of Rabbi Shimon bar Yochai or ‘the Rashbi,’ a Mishnaic sage and leading disciple of Rabbi Akiva in the 2nd century CE, and the day on which he revealed the deepest secrets of kabbalah in the form of the Zohar (Book of Splendour, literally ‘radiance’), a landmark text of Jewish mysticism.

Historians now suggest, however, that the association of Lag BaOmer with the death of Rabbi Shimon bar Yochai may be based on a printer’s error. Another tradition says Lag BaOmer is a day of celebration recalling the end of a plague that killed Rabbi Akiva’s 24,000 disciples.

Some authorities attribute the joy of Lag BaOmer to the belief that the manna that fed the people in the wilderness during the Exodus first appeared on the 18th of Iyar.

Although its origins are uncertain, Lag BaOmer has become a minor Jewish holiday. While the Counting of the Omer is a semi-mourning period between Pesach and Shavuot, all restrictions of mourning are lifted on this day. As a result, weddings, parties, listening to music, and haircuts are commonly scheduled to coincide with this day among Ashkenazi Jews.

Families go on picnics and outings; children go out to the fields with their teachers with bows and rubber-tipped arrows – a possible reminder of the war battles of Akiva’s students – and plant trees. It is customary to light bonfires, to symbolise the light Rabbi Shimon bar Yochai brought into the world. And many couples arrange their wedding for this day.

Tachanun, the prayer for special God’s mercy on one’s behalf, is not said on days with a festive character, including Lag BaOmer. It is said that when God is showing one a ‘smiling face,’ so to speak, as he does on holidays, there is no need to ask for special mercy.

Unrelated to Rabbi Shimon, the kabbalists also give a mystical interpretation to the Omer period as a time of spiritual cleansing and preparation for receiving the Torah on Shavuot. The days and weeks of counting, they say, represent various combinations of the sefirot, the divine emanations, whose contemplation ultimately leads to purity of mind and soul. The sombreness of this period reflects the seriousness of its spiritual pursuits.

Sephardic Jews call this holiday Lag LaOmer, which means ‘33rd [day] of the Omer,’ as opposed to Lag BaOmer. The Sephardi custom is to continue mourning practices through the 33rd day of the Omer and celebrate on the 34th day of the Omer, or LaD BaOmer (ל״ד בעומר‎), which falls today (20 May).

There is a tradition that Jewish boys do not get their first haircut until they are three years old, and some parents wait to time this occasions for their boys on the minor holiday of Lag BaOmer. Perhaps this tradition reflects the Biblical teaching that one may not eat the fruit that grows on a tree for the first three years (see Leviticus 19: 23). But the custom is usually traced back to Rabbi Isaac Luria (1534-1572), the 16th-century founder of the Lurianic School of Kabbalah, who assigned special mystical value to the ear-locks.

In my reflections this Friday evening, rather than dwelling on the length of my hair or lack of it, I am pondering some sayings associated with Rabbi Shimon bar Yochai, who has a particular association with this minor holiday:

‘To deceive anyone by words is worse than cheating him out of money.’

‘He who lets arrogance get the better of him is like the heathen worshipping idols.’