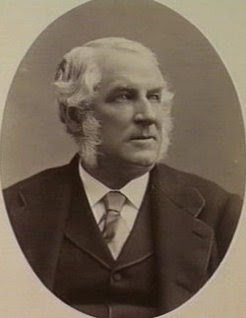 Sir George Ferguson Bowen (1821-1899), a Donegal-born author, academic and colonial governor … he was first married in Corfu, and later in Chelsea

During a holiday in Corfu some years ago (2019), I wrote a series of postings on Irish politicians who were involved in the political life of Corfu and played roles in the events that eventually led to the unification of Cork and the Ionian islands with the modern Greek state.

But during my visit to Holy Trinity Church, Sloane Square, last week, I heard a wedding story that reminded of a fifth Irish politician, academic and administrator who played a key role in the cultural, intellectual, political and social life of Corfu in the mid-19th century.

George William Howard Bowen married Gertrude Chamberlain in Holy Trinity Sloane Square on 16 January 1896 the marriage of The bride was a niece of Joseph Chamberlain (1836-1914), and a first cousin of the future Prime Minister Neville Chamberlain (1869-1940). The groom was a son of Sir George Ferguson Bowen (1821-1899), a Donegal-born author, academic and colonial governor, and Contessa Diamantina di Roma (1832-1893), a Greek-born aristocrat, who were married in Corfu.

During his career, Sir George Bowen held colonial appointments and postings in the Ionian Islands, Queensland, New Zealand, Victoria, Mauritius and Hong Kong. He was born on 2 November 1821, the eldest son of the Revd Edward Bowen (1779-1867), Church of Ireland Rector of Taughboyne (Churchtown), a parish near Lifford and St Johnston in Co Donegal. The Revd Edward Bowen later became Rector of All Saints’ Church, Newtowncunningham, Co Donegal, and the Bowen family lived at Bogay Glebe.

George Bowen was educated at Charterhouse School and studied classics at Trinity College, Oxford (BA 1844; MA 1847). He was twice President of the Oxford Union, was elected a fellow of Brasenose College, Oxford, in 1844, entered Lincoln’s Inn and received some naval training on HMS Victory. 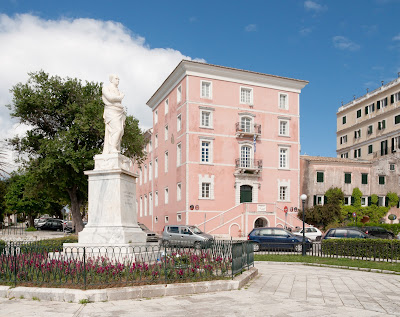 The Ionian Academy in Corfu … Sir George Bowen was president from 1847 to 1851 (Photograph: MrPanyGoff/Wikipedia/CCL)

Bowen moved to Greece in 1847 when he was appointed president of the Ionian Academy (Ιόνιος Ακαδημία) in Corfu. The academy was founded by Frederick North (1766-1827), 5th Earl of Guilford, in 1824 when he moved to Corfu, then under British administration as part of the United States of the Ionian Islands. This became the first university in modern Greece, but has since closed.

As he was setting out on his academic career in Corfu, Bowen met the artist, writer and poet Edward Lear (1812-1888) in Rome in 1847. Lear accepted Bowen’s invitation to visit Corfu, and even considered the possibility of taking a post at the University of Corfu. In a letter during his first visit to Corfu, he described ‘my very good friend Mr Bowen.’

Bowen remained president of the Ionian Academy until 1851, when he was elected to a fellowship at Brasenose College, Oxford, which he held until 1854. During the 1852 elections, he campaigned vigorously for WE Gladstone. 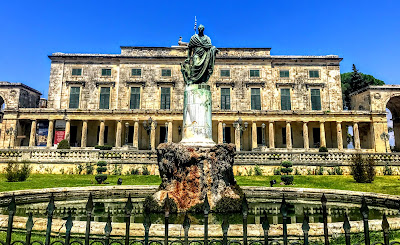 The Palace of Saint Michael and Saint George, Corfu … Countess Diamantina di Roma and Sir George Bowen were married in Corfu in the palace chapel in 1856 (Photograph: Patrick Comerford)

He returned to Corfu in 1854 when he became the Chief Secretary to Sir John Young, the Cavan-born Lord High Commissioner of the Ionian Islands. He was appointed a Companion of the Order of St Michael and St George (CMG) in 1855.

Perhaps Bowen had returned from Oxford to Corfu for love. While he was chief secretary in Corfu, Bowen married the Contessa Diamantina di Roma (1833-1893) on 28 April 1856; he was 34 and she was 22. Diamantina was the tenth of 11 children of Conte Giorgio-Candiano Roma (1798-1860) and his wife his wife, the former Contessa Orsola di Balsama.

The Roma family were local aristocracy of Venetian descent who had lived on the Ionian islands for many generations. They were originally named Regolo and had origins in 13th-century Rome. Count Giorgio-Candiano Roma, who was born on Zakynthos in 1833, was the President of the Ionian Senate (1850-1856), and titular head of the Islands, from 1850 to 1856. He was also the Poet Laureate of the Ionian Islands.

Countess Diamantina was born on Zakynthos in 1833. She had a privileged, well-educated upbringing and was familiar with the workings of government, politics and diplomacy. She was described as ‘pretty’ and ‘slender but graceful’.

Diamantina and George were married in the chapel of the Palace of Saint Michael and Saint George in Corfu. The ceremony was conducted by his brother, the Revd Edward Bowen, then the Rector of Lower Wigborow, Essex. A witness was Sir John Young, the Cavan-born Lord High Commissioner of the Ionian Islands, and later Governor of New South Wales. Twelve days later, Bowen was knighted (KCMG).

Diamantina and George were the parents of six children, including two children who were born in Corfu: a son Edward George Bowen, born 15 January 1857 and died 12 days later; and a daughter, Adelaide Diamantina (Nina) Bowen, born on 17 August 1858.

By the time he left Corfu, Bowen had fallen dramatically in Edward Lear’s esteem. In Lear’s diaries, Bowen had become ‘a beast’, ‘a brute,’ and as ‘Sir Gorgeous Figginson Blowing’, perhaps because of Bowen’s scheming against Lear’s friend Sir Franklin Lushington, a Supreme Court judge in the Ionian Islands. 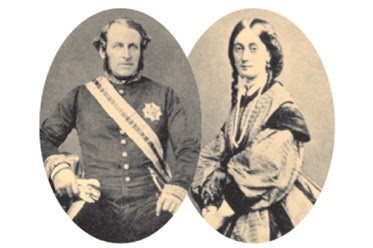 Diamantina and George Bowen left Corfu for Australia in 1859

The couple left Corfu in 1859 when Bowen was appointed the first Governor of Queensland, a colony that had just been separated from New South Wales. On their arrival in Brisbane, they were welcomed by a crowd of over 4,000 people waving flags, both the British Union Jack and the Greek flag.

The Bowens remained in Queensland until 1868, and it is said Bowen’s influence there was greater than that of the governors in other Australian colonies.

Meanwhile, Bowen’s father, the Revd Edward Bowen, died in Newtowncunningham, Co Donegal, on 18 August 1867, and is buried in All Saints’ Churchyard, Newtowncunningham. That year, Bowen was appointed Governor of New Zealand. There he was successful in reconciling the Māori reaction to the British rule and saw the end of the New Zealand Wars, and he also approved the flag of New Zealand, designed by Albert Hastings Markham.

Bowen became Governor of Victoria in 1873 and then moved to Mauritius in 1879 as 13th Governor of the colony. He was the Governor of Hong Kong from 1883 until he retired due to ill health in 1887.

George and Diamantina were the parents of six children. Two of those children were born in Corfu, and the other children included George William Howard Bowen, who was born in Brisbane in 1864 and who was married in Holy Trinity Church, Sloane Square in 1896.

Diamantina Lady Bowen died in London in 1893 at the age of 60. George married his second wife, the widowed Letitia Florence White, in Chelsea on 17 October 1896, nine months after his son was married in Holy Trinity Church, Sloane Square. Sir George Bowen died from bronchitis on 21 February 1899 in Brighton, after a short two-day illness. He was 77.

George Bowen recalled his career in Thirty Years of Colonial Government (London, 1889). But three other books were based on his academic and administrative experiences in Greece: Ithaca in 1850 (London 1851, translated into Greek 1859), Mount Athos, Thessaly and Epirus (London, 1852), and Handbook for Travellers in Greece (London, 1854).

Bowen’s background in the Church of Ireland is typical of many of the Irish Philhellenes. His brother, the Very Revd Edward Bowen (1828-1897), who was also born in Taughboyne, Co Donegal, and educated in Oxford, and conducted the wedding of George and Diamantina in Corfu, later became Rector of Taughboyne and then Dean of Raphoe (1882-1897). The present Rector of Taughboyne is the Revd Canon David Crooks. 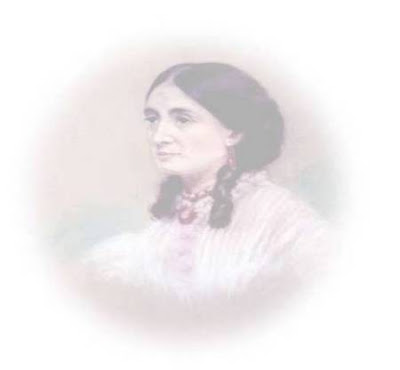 Countess Diamantina Bowen was described as ‘pretty’ and ‘slender but graceful’