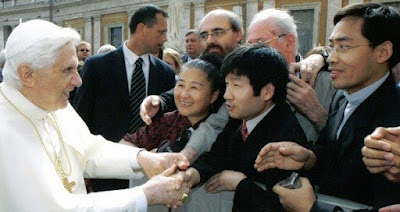 Soon after Cardinal Joseph Ratzinger was elected Pope Benedict XVI, Michael McGough recalled a joke in the Los Angeles Times about three German-speaking theologians who all died on the same day.

Many years ago, when I was chair of the Dublin University Far Eastern Mission, an old mission agency founded in TCD to work in Chinam I was taking part in a conference in Rome in September 2005 on the Church in China. I was part of a small group who were invited to sit in the front row at the top steps of Saint Peter’s Basilica in Rome, and I was introduced – unexpectedly and albeit very briefly – by Cardinal Desmond Connell to Pope Benedict XVI.

It was an opportunity to bring greetings from Archbishop John Neill of Dublin, and this short message was conveyed graciously to the Pope by Cardinal Connell.

It is with humour that I can still recall how it was almost a missed photo opportunity too. It was the day when ‘selfies’ were still seen as selfish and were not as sophisticated and as acceptable as they are today, and another Irish priest who had a camera that day captured the moment only after we had shaken hands, as I pulled my hand back and the Pope moved on to greet some Chinese delegates to the conference.

The photograph and reports of the meeting were later carried in a number of Church publications in Ireland, including the Church of Ireland Gazette and the Church Review.

It is more than 17 years since that conference in Rome and that brief papal handshake in the Vatican that was never properly caught by the cameras. But it came to mind this morning (31 December 2022) when I heard the news that the former Pope Benedict XVI has died.

Another figure in Michael McGough’s joke, the celebrated but controversial Swiss theologian and priest Hans Küng also died recently (6 April 2021) at his home in Tübingen at the age of 93. He has lived with Parkinson’s disease for the past eight years and who lived, taught and lectured for more than 40 years in Germany.

Cardinal Joseph Ratzinger was involved in removing his teaching license. As dean of theology at Tübingen in the early 1960s, Küng had offered – and Ratzinger accepted – a professorship at Tübingen. But the future Pope left academia, and later headed the Congregation for the Doctrine of the Faith, the successor to the Inquisition, for 25 years under Pope John Paul II.

Many of my colleague priests remember Hans Küng’s visit to Dublin in 1985, and still regard his lecture in Trinity College Dublin during that visit as one of the seminal moments in their theological lives.

In the 1990s, Küng took on the task of preparing a ‘Declaration Toward a Global Ethic’ for the Parliament of the World Religions in Chicago in 1993. The most referenced part of the declaration was the proposition that there can be no peace among the nations without peace among the religions. 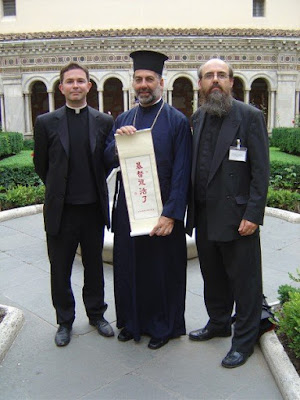 With the Revd Dr Alan McCormack (then Dean of Residence, Trinity College Dublin), and Archbishop Nikitas (Lulias) of Thyateira and Great Britain (then Archbishop of Hong Kong) at the conference on the Churches and China in Rome in September 2005

Posted by Patrick Comerford at 10:35