Praying at Christmas through poems
and with USPG: 6 January 2023 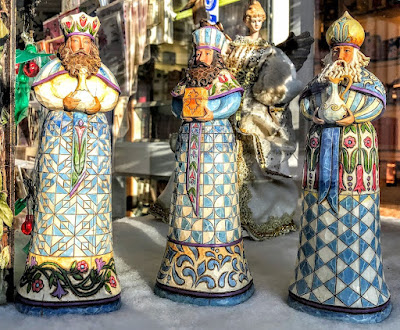 The Magi arrive at the Crib … a scene in a shop window in Askeaton, Co Limerick (Photograph: Patrick Comerford, 2022)

We arrived in Budapest late last night and Charlotte and I are staying at the Ecumenical Council of Churches in Hungary. We are spending the next three or four days visiting the Anglican Church of Saint Margaret of Hungary and Father Frank Hegedus with the Anglican mission agency USPG (United Society Partners in the Gospel) to see how the church and church agencies in Hungary are working with refugees from the war in Ukraine.

For many of the Ukrainain refugees, today is Orthodox Christmas Eve. In the West, the Christmas season comes to a close for many today with our celebrations of the Feast of the Epiphany. Traditionally, the Epiphany celebrates three events in the life of Christ: the Adoration of the Christ Child by the Magi; the Baptism of Christ by John in the River Jordan; and the Wedding Feast of Cana.

For my Christmas Poem this morning [6 January 2023], I have chosen TS Eliot’s ‘The Journey of the Magi.’

This poem was written after Eliot’s conversion to Christianity and his confirmation in the Church of England in 1927, and was published in Ariel Poems in 1930. This poem is truly a sermon in poem, and often on this feast, instead of preaching a sermon on this day, I have read this poem instead. 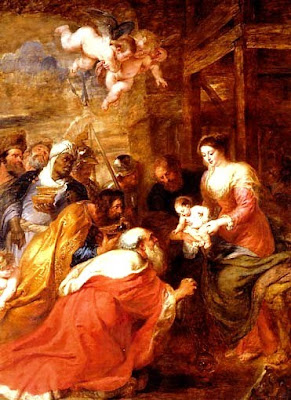 The Adoration of the Magi, by Peter Paul Rubens … the Altarpiece in the Chapel of King’s College, Cambridge

The poem also shows some influences of the earlier ‘The Magi’ by WB Yeats, my choice of poem yesterday. But, unlike Yeats, Eliot’s ‘The Journey of the Magi’ is a truly Anglican poem, for the first five lines are based on the 1622 ‘Nativity Sermon’ of Lancelot Andrewes (1555-1626), Bishop of Winchester, who first summarised Anglicanism in the dictum ‘One canon reduced to writing by God himself, two testaments, three creeds, four general councils, five centuries and the series of Fathers in that period … determine the boundary of our faith.’

Instead of celebrating the wonders of his journey, the surviving Magi complains about a journey that was painful, tedious, and seemingly pointless. The speaker says that a voice was always whispering in their ears as they went that ‘this was all folly.’ The magus may have been unimpressed by the new-born infant, but he realises that the incarnation changes everything, and he asks:

… were we led all that way for
Birth or Death?

The Magi arrive at a crib in a house on High Street, Stony Stratford (Photograph: Patrick Comerford, 2023) 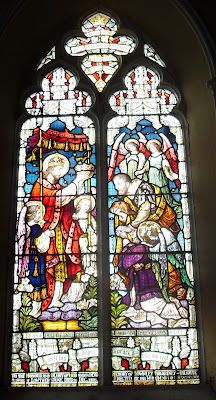 The Adoration of the Magi … a window by Meyers of Munich in the south transept of Saint George’s Church, Balbriggan, Co Dublin (Photograph: Patrick Comerford)

The USPG Prayer Diary invites us to pray today (The Feast of Epiphany) in these words:

Let us pray for asylum seekers, longing to live in peace without fear. May God light their path and their destination be a place of peace and security..