The Moorish-style Neolog Synagogue in Szombathely was designed by Ludwig Schöne and built in 1880 (Photograph: Wikipedia/CCL)

The centenary of the publication of James Joyce’s Ulysses was celebrated in Hungary, with the Irish Embassy in Budapest organising a literary evening and a Bloomsday programme last year in Szombathely, the town in western Hungary where James Joyce places the birth of Leopold Bloom’s father, Rudolph Bloom.

Joyce visited neither Budapest nor Szombathely. But, because he places birth of Rudolph Bloom in Szombathely, the city has become the focus of Joycean celebrations in Hungary.

Of course, critics debate and doubt Bloom’s Jewishness. His mother, Ellen Higgins, was a gentile, and his father converted in order to marry her. Leopold, who was neither circumcised nor had a bar mitzvah, was baptised in the Church of Ireland and became a Catholic to marry Molly. He ﬂouts the Jewish dietary laws, and proclaims himself an atheist.

Yet his protagonists see Bloom as Jewish and in Bloom James Joyce has created the literature’s archetypal Irish Jew. He is presented as the only descendant of a Hungarian Jewish family, whose father, Rudolf Virág emigrates from Szombathely through Budapest, Vienna, Milan and London to Dublin. Rudolf is the son of Lipóti Virag, but in Dublin he changes his name to Rudolph Bloom, virágbeing the Hungarian word for flower and also a family name in Hungary.

There are endless debates about Joyce’s choice of Szombathely. For over a decade, he taught English in Pula and then in Trieste, but he never visited Szombathely.

Research lead primarily by Róbert Orbán shows that a prosperous Jewish family named Blum lived in the main square in the city at Fő tér 40-41 in the mid-19th century. In this way, literary fiction has been transformed into urban myth, with a memorial plaque on the Blum-House.

Szombathely once had a relatively large Jewish population, and Joyce may have heard about some of those families while mixing in Hungarian circles in Trieste, then in the Austro-Hungarian Empire. Joyce was a genius at word play. The pronunciation of Szombathely (Sombattay) sounds like ‘somebody,’ and so it might have been a light-hearted play on words.

Another theory suggests Joyce chose the name from a Jewish friend in Trieste, the scholar Marino de Szombathely, who translated Homer’s Ulysses from Greek into Italian at a time when Joyce was writing Ulysses. They got to know each other while Joyce was in self-imposed exile in Trieste.

Today, Szombathely is the tenth largest city in Hungary, but has only 40 Jewish residents. Rudolph Bloom is celebrated in the city with a plaque on the Blum family’s former home. A bronze statue of Joyce was erected in the city in 2004, and for almost 30 years Bloomsday has been an important cultural event in the town on 16 June each year.

Szombathely is known for the Iseum, the classical temple of Isis, and as the birthplace of Saint Martin, Bishop of Tours. Jews were not allowed to live within the city limits until 1840, although they could own businesses there.

The Jewish population of Szombathely grew rapidly after the emancipation of Hungary’s Jews in 1840. On 4 April 1848, the Jewish community was attacked and the synagogue was destroyed. The city authorities, who supported the attackers, tried to expel the Jews from the city, but the central authorities intervened and stopped them.

The community split in 1871, and a separate Orthodox community was established. However, the two communities lived in harmony, and it was a vibrant community, with all the institutions typical of a Jewish community. The beautiful Moorish-style synagogue on Bathhyany Square, with Oriental and Romantic features, was designed by Ludwig Schöne and built in 1880. It has two large, dome-topped towers and a lavishly decorated exterior.

After World War I, the Jews of Szombathely were accused of supporting Austrian annexation of the town in 1919, and some Jews were killed in pogroms caused by this accusation.

After the outbreak of World War II, about 3,400 Jews lived there in 1941, making up almost 10% of the population. The Jews of the city were inducted into labour battalions, starting in 1942. The German occupation of Hungary began on 19 March 1944. A group of six Germans, led by a Gestapo officer, Scharführer Heinz von Arndt, immediately set about enforcing measures against Szombathely’s Jewish community with speed and with ferocity.

The official count shows 3,609 Jews were held in the ghetto in Szombathely. There was over-crowding and chronic shortages. The Mayor of Szombathely ignored all requests for assistance from the head of the Jewish Council. A decree on 1 June sealed off the ghetto from the rest of Szombathely. People seeking food or other provisions were banned from leaving the ghetto, and the living conditions of the thousands of Jews trapped there grew increasingly dire by the day.

In the final action before deportation to the concentration camps, people were moved from the ghetto to the Hungarian Motor and Machine Works in the closing days of June.

Beginning on 4 July and continuing for the next three days, trains from Szombathely were packed with Jews. The deportations were organised with deadly efficiency, and 4,228 Jews were deported from Szombathely to Auschwitz. To add insult to injury, all were forced to pay for their own train tickets.

Within a month and a half, the ghetto was cleared, the Motor and Machine Works was empty, and Jewish homes and possessions in Szombathely had been confiscated, looted and either taken away or given to other residents.

A thriving Jewish life and culture was almost entirely extinguished within a few months. Their last memory is the symbolic gate to the ghetto, built into the wall of a modern building on the site.

After the war, about 250-400 survivors trickled back into Szombathely. Most of them had little interest staying in a place where everything had been taken from them. They moved away and the beautiful Neolog Synagogue was transformed into a concert hall. A Holocaust memorial stands next to it.

A small museum on the history of the Jews in Szombathely and a visitor centre opened ten years ago in 2013. The Jewish community maintains a small prayer house and a cultural centre next door.

It is worth remembering this Jewish community that is so closely identified with the best-known Jewish figure in Irish literature. But it is even more important not to forget their sufferings and near-annihilation during the Holocaust. 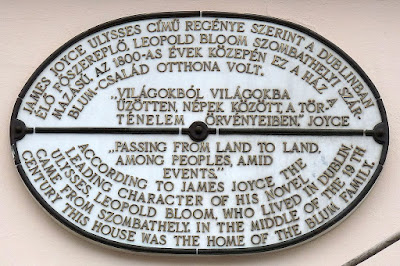 A family named Blum lived at Fő tér 40-41 in the main square in Szombathely in the mid-19th century (Photograph: Wikipedia/CCL)