1916: Finding a voice for the Church of Ireland 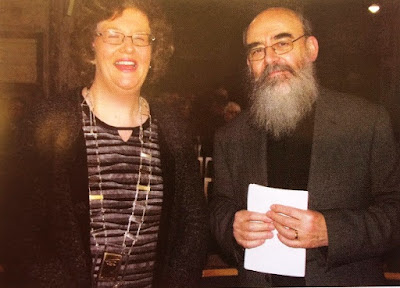 Cllr Maria Byrne and Canon Patrick Comerford before his lecture

The March 2016 edition of ‘Newslink’, the magazine of the Church of Ireland in the United Dioceses of Limerick, Killaloe and Ardfert, includes a report on page 21 by the editor, Joc Sanders, on the installation of two new canons in Saint Mary’s Cathedral, Limerick, followed by the following news report and photograph:

1916: Finding a voice for the Church of Ireland

Before the service Canon Patrick Comerford, Lecturer in Church History at the Church of Ireland Theological Institute, gave a most informative lecture on this subject. He was introduced by the Deputy Mayor of Limerick Cllr Maria Byrne.

As a Canon of Christ Church Cathedral, Dublin he began by deploring the way the commemorations of 1916 look like forcing the cathedral to close on Easter Day, the most important day in the Christian calendar, for the first time since it was built almost 1,000 years ago in 1030, for no good reason – the Rising began on Easter Monday 24th April, neither Easter Day nor in March.

He went on to explode many myths. He pointed out that neither Sinn Fein nor the IRA took part in the events of Easter Week, and he identified the Church of Ireland roots and links o many of the leaders and participants in the Rising itself, the events that ran up to it and the subsequent revolution.

He concluded by reviewing how our State has developed since those days, finishing with these words “Yes, we have been riven by petty sectarianism, discrimination and a legacy from 1916 that saw many families divided. But I am thankful for the democracy we have today. Despite its weaknesses and failures, it remains one of the most robust and stable democracies in Europe.”

You can read his full lecture on his blog at http://www.patrickcomerford.com/2016/02/1916-finding-voice-for-church-of-ireland.html