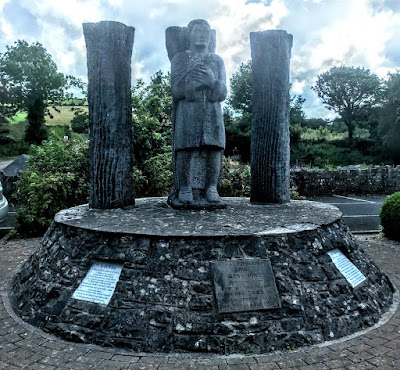 The sculpture in the centre of Broadford, Co Limerick, commemorating the last of the Bardic poets, Dáibhí Ó Bruadair (Photograph: Patrick Comerford, 2019)

Throughout Broadford and Dromcollogher in West Limerick, in sculptures, memorials and church windows, there is evident local pride in Dáibhí Ó Bruadair (1625-1698), one of the most significant poets in the Irish language in the 17th century.

His work comes at end of the old Irish cultural and political order and the decline in respect for the Gaelic bards and poets. His ode, D’Aithle Na bhFileadh (‘The High Poets are Gone’), written at the death of a fellow poet, is a lament that Ireland has become a far less educated place.

Despite the celebration of Ó Bruadair in this part of West Limerick, he was born in Barrymore, Co Cork. However, he spent much of his adult life in Limerick, receiving the patronage of great landowners, particularly the FitzGeralds of Springfield Castle, who provided him with a home.

This patronage was vital, as Ó Bruadair was the first 17th-century poet who tried to live purely from his poetry, like the professional mediaeval. However, his poem Is mairg nár chrean le maitheas saoghalta shows that this was not always successful: he often had to work as a farm labourer or maintained himself by translating genealogies, and he died in poverty.

Ó Bruadair was learned in Irish, Latin and English. His work is marked by a freshness that was rare in the 17th century and give interesting details about life in his time.

Ó Bruadair probably came to this part of West Limerick to study at the Bardic school run for generations by a branch of the O’Daly family in the townland of Tullaha – ‘Tullaha of the Schools.’ This bardic school continued until the death of Cúconnacht Ó Dálaigh in 1642, who may have been Ó Bruadair’s teacher and mentor.

His poems dealt with historical and political subjects, but his work also included religious poems, bitter satires on both Cromwellian planters and the Duke of Ormonde, and elegies on a number of his patrons, including the Bourkes of Cahirmoyle, the Fitzgeralds of Springfied and the Barrys of Co Cork.

Two of his most celebrated poems were written to celebrate the marriages of the sisters, Una and Eleanore Bourke of Cahermoyle. John Bourke, a wealthy merchant who rented Cahermoyle, was MP for Askeaton in the Parliament of James II. He died there in 1702 and is buried in the Bourke vault in Ardagh. 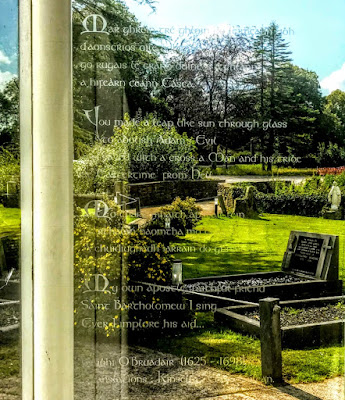 His religious poems were virulently anti-Protestant and anti-English, and include a poem on the Passion of Christ, as well as poems on the Remonstrants and the Titus Oates Plot (1678-82).

He wrote a series of poems, from a strongly nationalist and Catholic standpoint, commemorating the events of the reign of James II (1685-1691), and he defended the conduct of Sarsfield leading up to the Treaty of Limerick.

He was lighter and more humorous when he wrote about local matters, such his witty Guagan Gliog or his mock-heroic defence of the smiths of Co Limerick.

His principal patron, Sir John Fitzgerald of Springfield Castle, was brought to London on suspicion of being involved in the Titus Oates plot, and finally left Ireland for France in 1691.

In his closing days, Ó Bruadair’s patrons were John Bourke of Cahirmoyle, Co Limerick, and MacDonogh MacCarthy of Duhallow, Co Cork. He died in January 1698. 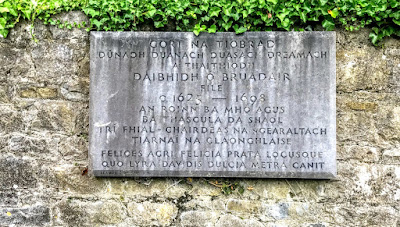 Dáibhí Ó Bruadair commemorated on a plaque at the entrance to Springfield Castle (Photograph: Patrick Comerford, 2019)