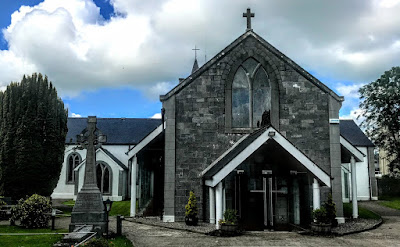 On my way to lunch in Springfield Castle at the weekend, I stopped to visit the churches in Broadford and Dromcollogher in west Limerick for the first time.

In the Church of Ireland Diocese of Limerick, these villages are within the Rathkeale Group of Parishes, although they have no parish churches; in the Roman Catholic Church, they form one parish of Dromcollogher-Broadford.

Dromcollogher is a picturesque small town or village in Co Limerick, not far from the border of North County Cork and about 12 km west of Charleville. It has a population of about 600 people.

The name Dromcollogher (Drom Collachair) in Irish means ‘the ridge of the hazel wood.’ Local people spell its name Dromcollogher, but there are other variations, including Drumcolloher, Dromcolloher and Drumcullogher, and Dromcolliher is used by the Ordnance Survey and An Post. 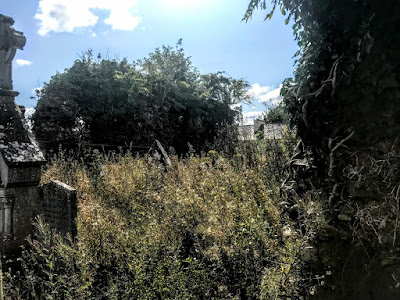 Graves in the ruins of the mediaeval church in Dromcollogher (Photograph: Patrick Comerford, 2019)

Dromcollogher is listed as a mediaeval town by Limerick County Council, with many protected buildings. It is first mentioned in The Book of Leinster in 1160, and it is mentioned twice in the Black Book of Limerick ca 1200.

An early mediaeval church was destroyed by war in 1302. It was rebuilt and was known as the capella Dromcolkylle in Corcomohid in 1418, when it was part of the larger parish of Corcomohide.

Dromcollogher was one of the starting points for the Irish Co-Op Movement. The first co-operative creamery was set up here in 1889 on the initiative of Count Horace Plunkett. The songwriter Percy French composed a song ‘There’s Only One Street In Dromcollogher.’ 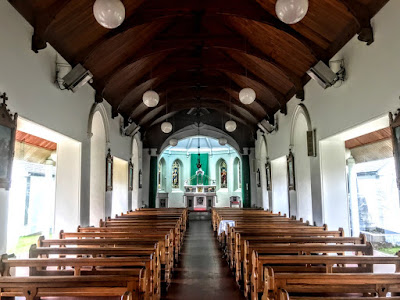 The protected or listed buildings in Dromcollogher include Saint Bartholomew’s, the Roman Catholic parish church built in 1824.

Father Maurice England was registered as parish priest of the larger surrounding area in 1704, and a new parish was formed after his death in 1719. Father Patrick Quin, parish priest, who died in 1778, was buried within the walls of the ruined mediaeval parish church.

Saint Bartholomew’s Church was built in 1824 by Father Michael Fitzgerald, who bought the site from Robert Jones Staveley of Glenduff Castle, Co Limerick, a judge of the High Court.

Renovations were carried out in 1861 by Father Patrick Quaid, who also built a new church in neighbouring Broadford. Father Michael Byrne (PP 1902-1917) refurbished and decorated the church in the early 20th century, with improvements designed in 1906-1909 by the Limerick-based architect Brian Edward Fitzgerald Sheehy (1870-1930). The apse and many of the stained-glass windows were added at this time. 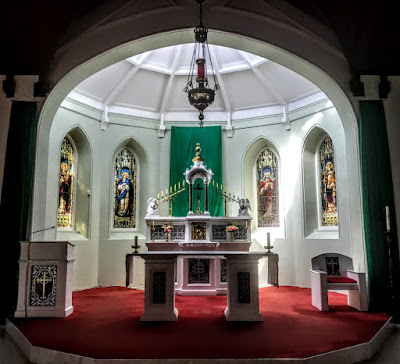 The stained-glass windows behind the altar depict (from left to right) Saint David, the Virgin Mary, the Sacred Heart, and Saint Catherine. They were donated by David and Mary O’Leary Hannigan of Kilbolane Castle, Milford, Co Cork, and other members of their family in 1906.

The stained-glass windows in the left transept depict the Sacred Heart, donated by Mrs Toomey in memory of her parents, and the Holy Child of Jerusalem, similar to the Child of Prague. 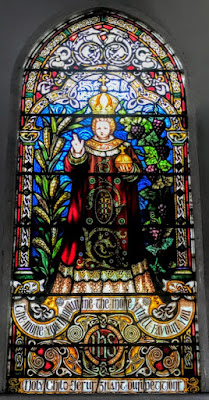 ‘The Holy Child of Jerusalem’ in a stained-glass window in the west (liturgical north) transept (Photograph: Patrick Comerford, 2019)

James Pearse (1839-1900), father of the 1916 leaders Patrick and William Pearse, donated the statue of the Virgin Mary to the left of the High Altar. The statue to the right is of the Sacred Heart.

A Pieta statue is in memory of John Gleeson. Other statues in the church include Saint Theresa of Lisieux, Saint Joseph, and Saint Anthony. The Stations of the Cross are in memory of Dorcas Mary Aherne. 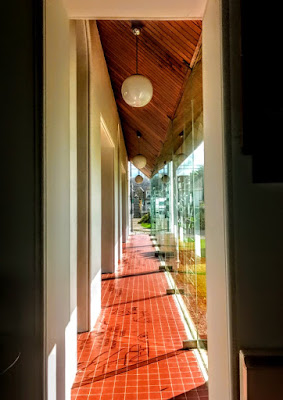 The walls of the nave were removed and replaced with glass panels, forming light-filled, cloister like side aisles (Photograph: Patrick Comerford, 2019)

Further renovations were carried out in the 1950s and again in the 1990s. There was considerable debate in the 1990s about whether to build a new church or to radically upgrade the existing church.

The walls of the nave were removed and replaced with glass panels, forming light-filled, cloister like side aisles. The glass panels are the work of Kevin Kelly and the Abbey Stained Glass Studios.

The glass is engraved with both religious and secular scenes, including scenes from the life of Saint Bartholomew, the calling of Saint Nathaniel, who is identified with Saint Bartholomew, in Saint John’s Gospel (see John 1: 43-51), scenes from local history and excerpts from poetry by the local bardic poet, Daibhi O Bruadair (1625-1698), who lived in Springfield Castle, outside Dromcollogher. 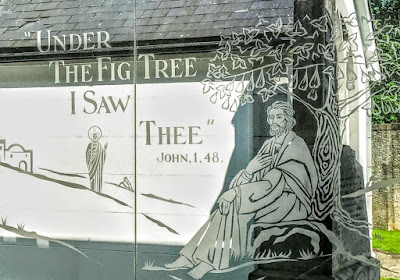 The glass panels depict scenes from the life of Saint Bartholomew, including the calling of Saint Nathaniel (Photograph: Patrick Comerford, 2019)

This is a cruciform-plan double-height gable-fronted parish church, aligned on a north-south axis rather than the traditional liturgical east-west axis.

The church had a three-bay nave, with a recent porch at the front, glazed side aisles at each side, three-bay transepts at the sides, and a canted, three-bay chancel at the liturgical east end (north). There are timber-frame balconies in each transept.

The once free-standing three-stage bell tower to north (liturgical east) is linked to the church and sacristy by a recent corridor. 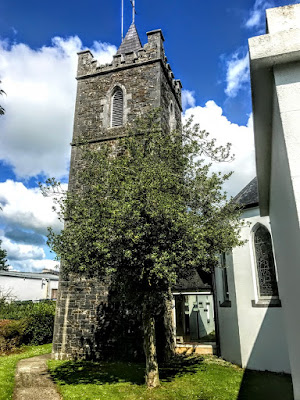 Much of the church’s historic character remains intact, mostly through the retention of key historic features, including the stained-glass windows, decorative stone details and the bell tower.

These alterations to the nave make for a light and airy interior that retains many artistic features, including the finely-crafted balconies and statues. 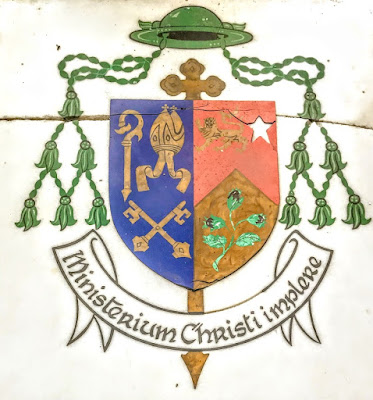 Father William O’Donnell, who was parish priest for 33 years and died in 1876, is the only parish priest buried inside the church. Four parish priests are buried in the church grounds: Michael Byrne; Canon James Foley; Canon John Reeves; and Archdeacon Hugh O’Connor. 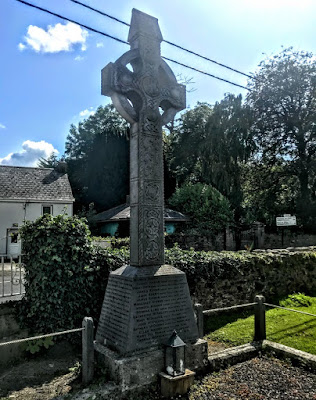 The Celtic cross in the churchyard is a memorial to the 48 victims of a fire in 1926 (Photograph: Patrick Comerford, 2019)

A large Celtic cross in the churchyard is a memorial to the victims of a fire at a film showing on Sunday evening, 5 September 1926. William ‘Baby’ Forde had hired a room from Patrick Brennan in the centre of Dromcollogher and planned to show Cecil B DeMille’s Ten Commandments in a make-shift, timber-built cinema. But, during the showing, a reel of nitrate film caught fire from the flame of a candle. The fire spread, and 46 people died that night, with two more dying later in hospital.

The 48 people represented one-tenth of the population of Dromcollogher at the time. Many who died were children. One entire family died – a father, mother and their two children.

The victims were buried in the churchyard in a communal grave marked by the Celtic cross. The town library was later built on the site of the fire.

The tragedy, known locally as the ‘Dromcollogher Burning,’ was the worst-known fire disaster in Irish history until the Betelgeuse fire in 1979 and the Stardust disaster in 1981, in which 50 and 48 people died.

Saint Catherine depicted in one of the chancel windows (Photograph: Patrick Comerford, 2019)

AS A descendant of JOHN HANNIGAN and Catherine LYNCH of Dromcollogher, I have made it my "duty" over the years, 1999 to 2018, to visit the town and call upon relations. The sad story of the fire at the cinema with the stone memorial at the front gate to the church property, with all the names of the victims, including Norah HANNIGAN, who would be my cousin, will always hold a special place in my heart, even though I live thousands of miles away in Scarborough QUEENALAND AUSTRALIA. Yes that whole area of Dromcollogher, Broardford, Tulleylease, etc, etc, Holds a very special place in my very being, knowing that I am a product of the "IRISH SOIL". Hopefully my visits to this land of my forebears are NOT over yet, maybe when this Covid---19 Pandemic is over I will be able to return to this land of my Irish Heritage once again. Blessings to Patrick Comerford and to the people of Dromcollogher from this man in far off AUSTRALIA. WILLIAM (BILL)PATRICK HANNIGAN. Queensland 4020 Australia.

I'm from Kentucky USA. I'd love to visit. My GGG grandmother Catherine Hines (b. 11/1/1843) and my GGG grandfather John O'Riordan( b. 1830) were married in that church. Their first child was born in County Limerick (Michael) 11/17/1869. No doubt, Father William O'Donnel (Parish priest from 1843-1876) either presided over their wedding or knew of it. I'd estimate their wedding occurred around the early to mid 1860's. I really appreciate this wonderful information.

Looking at info on GG grandfather James Michael Ryan. His Australian WW1 war records say he was born in Dromcollogher Co Limerick in1884. His parents names were also James Michael Ryan and Bridget Reedy but no further info given than that. If anyone knows anything further, we would love the info.

My Great Great Grandmother Ellen Jourdan was from Dromcollogher born abt 1832, she came to Australia in 1850 as part of the Earl Grey Scheme, her siblings Mary and Edward baptised 1834 and 1836.Parents William Jourdan died before 1850 and Judith Feeheny died aft 1850.Would love to hear from any Jourdan / Jordan or Feeheny Families.

Vickie, Ellen Jordan (And Thomas O'Sullivan) were my (x4) great grandparents, via their daughter Johanna. I didn't have Ellen's parents names, the only information I have come by is via Craig Fullerton's website. I would love any more information that you have about the Jordan and Feeheny families.